Things That Make Me Happy

I just got an iced white chocolate toasted marshmallow breve mocha. Instead of dwelling on the fact that with this one drink I have not only consumed my daily allowance of calories AND regained the 5 pounds I was so proud of losing on the last fire, I'm going to focus on the delicious crunchy Crystals of white chocolate that clog up the straw. The key to a good IWCTMBM is finding a coffee stand that A) has white chocolate POWDER, and B) has a barista that is not too snobby to approach with the intricate directions of proper composition. (i.e. one scoop of white chocolate powder, one splash of toasted marshmallow, two shots 16 oz, extra ice and Most Importantly: UNSTIRRED. That's how you get the crystals. Mmmmmm.) I found just such a coffee stand today in Sisters, Oregon. Sara's Coffee met every requisite and it. Is. Awesome. Never mind the calories. Or the guilt. Maybe I can blame that five pounds on the Pineapple Curry Thai Food I had yesterday instead.

Another thing that makes me happy is jeans. I was back in my jeans for three whole days, and it was heaven. For those of you who have never had the entirely dubious thrill of wearing nomex, maybe the enjoyment of a pair of jeans seems trite. But after several multi-day stints in forest green pants that neither breathe, wear, or look good (well), it is so nice to relocate my actual crotch and quit trying to find a way to pretend that my work pants fit me. Because they don't. At all. It's like every manufacturer of nomex pants conspired against the human race to design the Worst Pants Ever, and when they found out that pleated slacks were already taken, they had to settle for second best: alien shaped cargo pants. I saw somebody that actually fit nomex once, and I'm pretty sure that they WERE, in fact, alien. No human being Actually has an 18 inch crotch. I don't care what you say, not even Ron Jeremy needs this much room. Unless the pants are actually supposed to double as a jumpsuit/unitard. Then I could understand the amount of fabric between crotch and waist. I really could pull the stupid things up over my boobs and just skip the ultra stylish yellow shirt. It's not a bad idea. Someday, a rocket scientist will redesign nomex for actual people. And maybe even in a less 1993 shade of green. But I'm not holding my breathe to see it in this lifetime. I wonder who thought forest green was a really good idea for wild land firefighters. Like "ooh, look how outdoorsy we look!" I wonder if Eddie Bauer was on the design team when they decided denim blue was just too urban for the rugged individualists battling the flames. At least we have yellow shirts, because there are lots of really good reasons to have yellow shirts. For example: ... Oh yeah. Bees like yellow. You attract a lot of bees. And dirty sooty sweat stains are black, which contrasts nicely with yellow. And everyone basically looks good in bright effing yellow. Especially when it turns to grayish vomit colored beigy yellow after a season or two. Next time they decide to revamp wild land wardrobes, can they get Vera Wang or anybody with taste? Even Aspen does better than this. Maybe it's just so I can go home and appreciate my jeans. Lovely, soft, go-anywhere blue jeans. That fit. Or did before my mocha.

On the last fire assignment I got to work three whole shifts with my Favorite Boy Ever. I think some people are surprised that my husband is still the one person in the whole world that I'd rather hang out with than anybody else. Maybe it's just because he's still playing hard to get, and if he didn't have that silly wedding band to say otherwise he would still be denying to the world that we're in a relationship, so I feel like I have a conquest to make still. I think sometimes he likes to forget that he accidentally married me all of a sudden one day last summer, and really wants me to be chasing him still. So I do. Maybe one day I will turn the tables on him and make him chase me. I'll bet if I wear nomex it would drive him wild.

So I was driving home from the last fire and the radio station said to call right then to win a VIP table at a downtown bar for the next Ducks game (which is tonight). Being the easily directed drone that I am, I obeyed and somehow happened to be caller 10, which meant I had 30 seconds to list off three celebrities that had first and last names starting with D's. after about 45 seconds I had come up with Daisy Duck, Donald Duck, and with prompting from the DJ, Daffy Duck. I won the VIP table, though certainly not for originality. As Josh chastised my lack of creativity, I offered him the same challenge, but all he could come up with was Daisy Duke. Of course. SHE doesn't have to wear nomex. Anyway, we got the VIP table tonight, which I will be late for, since apparently I have to work forever. Also: if I get there late enough tonight can I count the calories from the hot wing for tomorrow? I love hot wings. 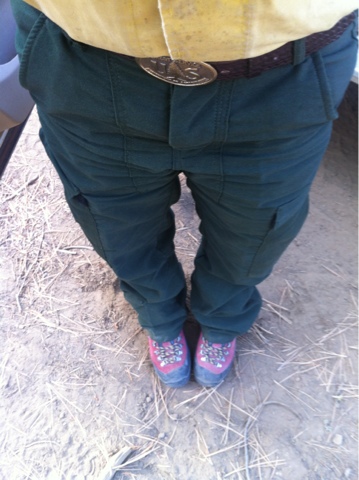 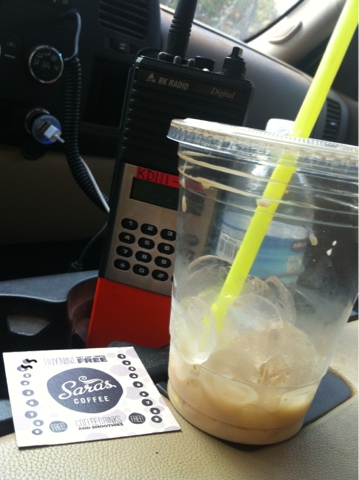