I'm a pretty lucky girl. I have TWO wedding rings. One is my "work" ring, which matches Josh's and I won by protesting that I did manly work too and needed a "tough" ring. The other is a FAT *SS diamond. I suppose that sounds crass, but I really want you to understand that I am sporting a diamond bigger than the spiders that live in my basement. Yes. That big. My "girl" ring is about 1.1 carats of vintage 1930s gorgeousness. I am in love with it. The idea is that I wear my "work " ring on fires and when I am doing my manly jobs. Like riding quads on dusty trails and cleaning toilets. And my "girl" ring is for my days off (???) when I'm home, shopping, making dinner, and cleaning toilets (why does that sound familiar)... But something that occurred to me, when I got home from this fire and went to change into my girl ring, that it was kind of representative of the whole persona transformation that I go through at least twice a year: leaving for my first fire, and coming, finally, home. Granted last year was the first fire season that I've had any kind of a ring to wear, and last year I was sans diamond, but I know the switch took place nonetheless. Truthfully it's just a really good parallel to the dichotomy that is my life every year, before and after any rings. My "work" ring is a simple band of titanium, accented by a channeled stripe of white gold. The metal is strong, and only the soft white gold in the middle shows the wear and abuse that my hands endure. It's identical to Josh's, only smaller, obviously, because if my fingers were as big as his we might have issues. I noticed when I put my "work" ring back on after a few months of girliness, that it is thicker and much more noticeable than the delicate white gold filigree of my "girl" ring. The titanium is unbending, thick, and would easily compromise the frail bones of my fingers if the appropriate pressure were applied. It's like the me that walks into fire camp every summer. I'm strong, I'm confident. I know why I'm there and EXACTLY what to do. This Me is the only one who has absolutely no issue with self-defense and establishing authority in most settings. (Granted, you introduce a "para-god" like my adorable husband into the scene and I'm basically reduced to a blood pressure machine and oxygen tank hooker-upper.) But the fire line is the one place I have come to KNOW securely, that I am where I should be and what I need to do. I get home, slip back into my fragile, if (maybe?) pretty role of the diamond and filigree mother/housewife. Begging forgiveness for the epic failures in child rearing, housekeeping, and all around dismal nurturing skills. It's not that both of the MEs don't have their place, their strengths and weaknesses, but I find it a puzzlement how strong I feel, in my non-flattering nomex and 17 pound boots, and how moveable I am when I am stripped of this uniform. I have no authority, I am a jellyfish of ignorance and misguided judgement when it comes to the role of mother. But I try to make it look good. Shiny like a 1.1 carat diamond. Polish it up and smother it in Scentsy and convince the world that you've GOT IT TOGETHER.

Another thing I noticed, which is TOTALLY unrelated, has to do with fire - specifically, fire fighters. The men in the ever stylish yellow and green, storming the forests to save the world from Certain Demise. On my last fire assignment, I worked with a handful of smokejumpers from the Redmond Air Center. For the layperson (i.e. not fire savvy), let me clarify a few things about wildland fire: as much as I love the dramatic lauds of glory ascribed to me for my bravery in being one of these stalwart soldiers, defending trees everywhere, I do not actually fight the fire. I have in the past. I am trained to do so, but somewhere along the line I wised up and realized I could make way more money do way less work as an EMT that follows the actual fire-FIGHTERS around, ready to swoop in and catch fallen heroes. Mostly I sit in my truck and read Cosmo or US Weekly. And to quell another commonly held misconception (for the generation basking in the glory of Howie Long's Firestorm), even the actual fighters of fire do not parachute out of helicopters. Or throw running chainsaws in the air from the back of a motorcycle. OK, maybe we do that sometimes. Just to be cool. Smokejumpers are an elite, or maybe the Most Elite (sorry hotshots) echelon of wildland firefighters. Most smokejumpers are older than the average hotshot, engine slug or type 2 firefighter, because it takes years of experience and maturity to be responsible enough to parachute out of AIRPLANES into burning conflagrations. They really do that, and it is pretty epic. In a not-kitschy-and-diluted-sense of the word. To clear up any confusion, Hotshot Crews consist of 20 firefighters with at least some experience who are trained, expected and required to hike crazy amounts of ridiculous terrain to attack a fire head on, carrying their own tools, gear and enough food and water to be self sufficient for at least a few days. They are, in a word, bad-*ss (sorry mom). Engine slugs are, well, slugs who work on engines. They work with water and pumps and usually stay closer to roads and the relative movable safety of their trucks. They work hard, or at least some do, don't get me wrong. Most hand crews are type 2, and the type 2 firefighter is the meat and potatoes of every wildland fire. They are the boots on the ground that scratch hundreds of miles of fire line in the dirt every summer, mop up acres of ash, and populate the crazy tent cities that spring up overnight on any large incident. But back to the smokejumper: there is an unspoken rule that in order to be a smokejumper, you must prove yourself as a master storyteller. What is most interesting about these stories is that the smokejumper delivers them in a manner that would have you believe that the very act of jumping out of an airplane at a couple thousand feet strapped to approximately 120lbs of gear, into a burning forest, isn't actually the most interesting part. Usually the story line kicker is something about criminals inside the fire that started it as they were running from the law, or saving someone from a bee attack on the edge of a cliff, or hiking out (because it turns out you CAN'T actually parachute OUT of a fire) to the road on two broken ankles, or something like that, while you (the listener) are still processing that 2000 ft drop into Trees That Are On Fire, the jumper is cracking up about How Funny it was that his buddy's chute got hung up in a tree and he had to cut himself free with a two inch pocket knife. If ever you get the chance to listen in when one of these guys is storytelling. Don't miss it. It's a stark contrast to the slightly less mature storytelling of hotshots which usually have to do with burnouts, R&R days and memorable bars, or type 2 guys who are still talking about the hot chick on Engine 62. I really have a ton of respect for all of these hardworking guys (and girls!!!), jumpers, shots and FFT2. I have met some of the best people I know working on these fires, and will never lack gratefulness for the experiences I get to have every summer, and get paid for it. Yep, I'm a lucky girl. 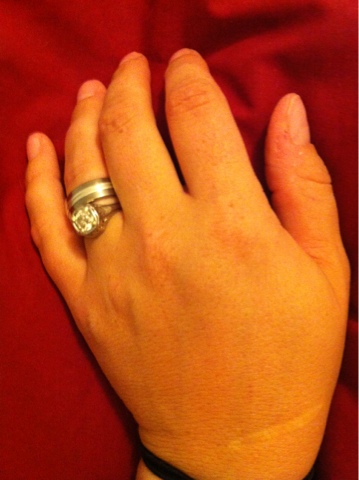