Things That Are Decided By Weather 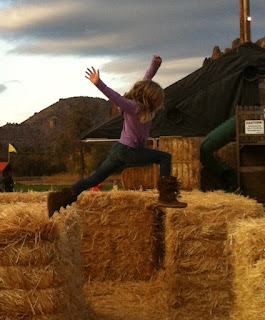 Today, it is cold and blustery, and when I walked Aspen to the bus stop, I felt a raindrop. I immediately patted myself on the back for the astute decision to not make the 1.27 mile trek to walk her to school. Obviously I would have had pneumonia from that single raindrop had I undertaken such a feat. Already my immune system was compromised by the sweaty frenzy of searching first for Aspen's "missing since Wednesday" school bag, then her "also missing since Wednesday" "self-manager" bracelet, and then once again for her "missing since 5 minutes ago" school bag, which, incidentally, held her "self-manager" bracelet. I am not sure that enlisting your mother to help you tear apart your knee-deep-in-calico-critters-and-squinkies bedroom, looking for a red rubber bracelet, really leaves one eligible for the "self-manager" accolade, but since she clambered onto the bus sporting her bag, homework folder, AND the bracelet, I guess what her teacher never witnesses won't hurt her. Somewhere about 3/5's of the way through the whole house hunt, I realized that the fact that she had been missing both items since Wednesday obviously made sense since she had not been back to school since early release that day. While I was wondering what she used for the second half of the week to carry her homework folder and hide her self-manager bracelet in, it dawned on me that a half week of school conferences, trips to the swimming pool, pumpkin patch and dance classes had made any sort of mundanity like a school bag nothing but a vaguely obscure memory in the ping-pongish mind of my 9 year old. Thank god I decided against getting out of my sweatpants until some minor emergency later in the day forces me to, because I worked up quite a sweat, especially after the school bag was re-lost on the couch under the sleeping hound dog who seemed bizarrely unconcerned with the stigma of a missing self-manager bracelet. I might have been less moved to helping Aspen in her quest, except for the exasperated, arm flopping, acquiescent "I guess I am just not a self-manager", followed by a fake tear or two. She's good.

Another good reason for staying in my sweats all day is that it really removes the question of whether or not I should shower. Obviously if I decided to shower I would have to take off the sweat pants, thereby removing the whole reason for keeping them on : i.e. utter laziness. At this point I can almost justify never getting dressed by the amount of dog hair that my sweatpants have cleaned off of the couch. Not only am I saving laundry by not hairing another pair of pants, I am doubling as an upholstery-hair-removal-machine. Changing into real clothes would be some sort of indicator that I have an agenda today, or something to accomplish. That is really kind of silly since we all know that I am jobless, schoolless, and all of my online shopping needs can be met in my sweats. It's really a win win situation, until Josh sees the bank statement and the Amazon.com boxes piling up by the front door. In which case I hastily don jeans, make a pot roast and get out the vacuum, so he thinks that I got the hair off of the couch through some movement other than simply rolling from side to side.

I have decided that I am not much good at winter. Or fall. Or most of spring.  I like the IDEA of these seasons, the new smells and colors - and especially layering options. But somehow my attitude never keeps up with my lofty dreams of steaming pumpkin bread and children dressed in plaid and cable knit. I would really like to not get crabby when the temperature drops below 68, but it's kind of difficult. I blame my mother for this, not because I ever saw the ramifications of Seasonal Affective Disorder in her (mom's emotional ranges were very seasonally consistent), but because she hates the cold. Maybe she taught me that cold was something to really get depressed about, entailing suffering and misery and no more flip flops. Maybe I am bitter from the autumns when I had to pack my cookie monster shorts into the summer trunk, knowing that the next time I saw them, they would be Emily's. Oh, the tragedy. Maybe I associate the change of season with claustrophobic turtlenecks and tights that ALWAYS managed to get twisted at the top of my legs so that the crotch seam ran in a nice spiral around my hips, choking off circulation to my thighs and pulling the tights down so that I felt like a penguin when I walked. Yes, fall marks a certain sadness for me, in spite of the resurgent fashion trend of flannel that takes me back to 1993 and my doc martens. It brings back the chronic disappointment I feel that a pea coat always makes me look fat and scarves choke me. Alas. I look forward to the depths of winter when staying on the couch in sweatpants is mandated by snow days and flu season. Bring on the Five Mile Creeks (this is quintessential virus induced television in the Stecker Clan) and Lipton Chicken Noodle Soup. Give me the temperature related justification to only wear UGG boots that my husband hates. All I need now is a wiener dog puppy to lick my nose. 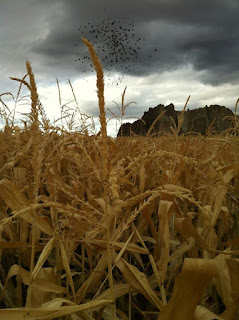 Actually, I love fall. I have this tremendous recipe for Butternut Squash Casserole (see next blog) that is ever so much more dessert than squash. I also found an awesome Baked Potato Soup recipe on Pinterest that is so easy and so yummy it is probably illegal. Cheap too. Really fall is all about the food. And the Flannel. And the memories. Like going to Central Oregon Pumpkin Company with good friends, spending over $100 to get lost in a Maize Maze that specifies you can only use DESIGNATED bathrooms in the maze, but fails to place any locatable designated bathrooms in said labyrinth. Granted, since I am pretty sure I was just going in giant circles until I cheated my way out of the maze (note: if you discreetly hint to the youngest kids that cutting through the corn might be the fastest way out, then you as a parent have no choice but to follow), I guess I probably never crossed paths with the designated toilet. I won't deny that the thought of sneaking into some tall corn rows to relieve myself crossed my mind, but every time I saw a safe spot, three little kids would come bursting out of the corn, followed by adults muttering about darn kids and cheating... Somehow we all made it out alive without having to eat one of us, although I think the general consensus was that we would sacrifice the youngest since they would be most tender for eating and none of us was really hungry enough to need more meat than Aspen and Ryder could have supplied. Fall is also all about football, and finding friends with cable TV and beer for mooching. We have done so pretty successfully, and saved a pretty penny on beer AND cable. Highly recommend.

Anyway, I have to get back to my lounging, I have been way too productive this morning. I think I need to spend the rest of the day watching Bones so that I resist the temptation to cheat on Josh with the new season of The Office on Netflix.