Things That Are Delicious 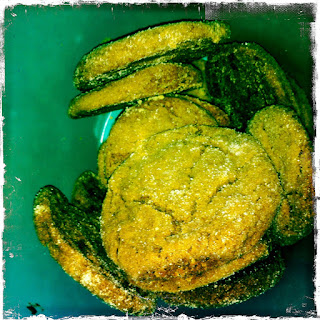 When I was a little girl, my Grandma Schiffman lived in a mauve retirement center. One of her best friends in this pastel paradise of my juvenile fantasies was a lady named Lee Ruckdashel. Lee fell in love with my captivating beauty and magical charm, or at least thought I was cute,  and adopted me as one of her own grandchildren. I spent several afternoons baking cookies with Grandma Lee, the foremost of which stand out in my memory are the famous Gingersnaps that have yet to be matched in absolute yumminess. Grandma Lee passed away when I was still very young, but left to me a Christmas Tree Pin covered in rhinestones along with her immortal recipe, which today, I share with you. Pretty Darn Lucky.

1 1/2 cups shortening - she used (yellow) crisco
(I made these with coconut oil and they positively MELT in your mouth. And cost about 50 cents apiece.)
2 cups sugar
1/2 cup light molasses (I usually use blackstrap - get your USRDA of iron in a cookie!!)
2 eggs
4 cups flour
2 tsp cinnamon
2 tsp ground cloves
2 tsp ground ginger
1/2 tsp salt
4 tsp soda (I used three and they were fine)

Cream shortening, sugar, eggs and molasses. Add flour, salt, soda and spices and mix well. Roll in to about 1.5 inch balls and dip in sugar. Place about 2 inches apart on a cookie sheet and bake @ 350º for 12-15 minutes, or just a couple minutes after they crinkle. I like them soft so I take them out shortly after the crinkling starts. Makes about 3 dozen.

Josh and I have a fundamental disagreement about whether gingersnaps are a strictly Christmas Holiday Tradition. I maintain that they are year-round appropriate but definitely more appealing in the fall when spices like clove and ginger and cinnamon take on epic proportions in their gallant attempts to transform a variety of squashes into something edible. Apparently Josh associates them with The Holiday, based on a Christmas Party experience and buying bags of the cheap crunchy ones to take to potlucks. First of all, these Gingersnaps don't even fall into the same food group as those, and secondly, if he wants to insist that they are a Christmas tradition, that is fine, but we are starting our celebration early. Break out the Bing Crosby, y'all.

We had a BBQ last night because it was 45 degrees and nasty outside and it seemed appropriate. I made a batch of these cookies and I think everybody sat around the kitchen table and just ate Gingersnaps and discussed politics (much to my chagrin) and living in cults. We also imbibed hot apple cider with cinnamon whisky, and that made the discussions even better. I strongly recommend this drink. Afterwards most of the adults decided it would be a good idea to go over to Mavericks and do some dancing. Apparently we had a really good time because my legs hurt today and I COMPLETELY FORGOT to take the girls to their Irish Dance class. Curses. And here I was all proud of myself for getting up and making biscuits and gravy and stuff. The Heck.  I make a terrible adult. In some ways I am relieved, since my face is sloughing off at an extraordinary rate and while I could pass for a zombie cowgirl last night at the costume-approriate bar, sitting with perfectly manicured dance moms is slightly less cool when you're shedding giant chunks of skin. But I could have made Josh take them. If I had remembered. Someone should take away my grown up pass. I think I will have another gingersnap to console myself.
at 28 October