Things That Excite Me 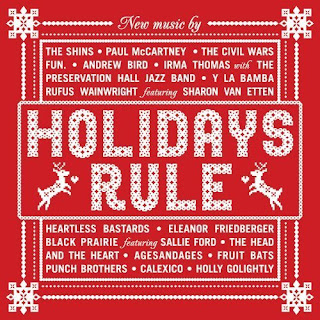 I cannot begin to describe the fits of giddiness that I was thrown into this morning when The Punch Brothers posted THIS on Facebook.

If there's two things I love it's Holiday Music and All of These Bands. Which is more than two things, but who is counting? ME! But mostly just the days until this thing is released. And yes, I already preordered on Amazon. Go check out Holidays Rule and be cool like me. I can't freaking wait. I should pre-apologize to Josh right away for already boring him this holiday season. What is it with these people and their need for more variety than one multi-artist album can provide? I mean really.

In other, less exciting news, I got the job at the Pendleton Outlet. Now I have to learn how to dress like a grown up and conduct myself in a manner befitting a retail clothing salesperson. Tips, anyone? I hope they play good holiday music there. Really, it's a part time seasonal position, and already the 15 hours a week is making me claustrophobic. But then there is that dangling, shiny carrot of an employee discount. Visions of throw pillows dance in my head.

I went for my first in a series of facials with Clare at Luna Healing Studios yesterday. Really it was my second facial with her since she did a test drive Jessner Peel on me a couple weeks ago, but we decided to start a whole thingy to try to fix my face for real. After she got done giving me a "microderm abrasion" I asked her what it was. Turns out, it's pretty much what it sounds like - she sandblasted my face with tiny little crystals and a really sucky vacuum thing. All I kept thinking of as she ran it over my cheeks again and again was Will Ferrel in the mail room in Elf sticking his face to the mail tube. Again, you can tell it's getting close to holiday season when I have the uncontrollable urge to watch Elf. I will wait until after Halloween. I will. I will. Obviously Halloween calls for scary movies like Gaslight with Charles Boyer, or Charade, one of Audrey Hepburn's all time greats - or the ultimate murder mystery - Laura with Gene Tierney and Dana Andrews (*swoon). Or, in the case of this Halloween, Snow White and The Huntsman, since Josh is leaving overnight and he refuses to watch anything with Kristen Stewart in it. I really don't blame him, but I have this morbid curiosity to watch her not-act in the movie that was her demise. Or at least a great launch into celebrity villiany. But back to my facial: After Clare got done sandblasting my face, she decided to do another Jessner on me. Ok, I thought. The last one wasn't too bad. It only stung a little and my face didn't totally Frankenstein out like I expected. In fact, I was pretty happy with the results. Turns out, if you sandblast the first 12 layers or so of your facial skin off BEFORE you put the Jessner acids on it, it burns like a sonofablender. I cried like a little girl, but kept telling Clare that I just had something in my eyes which she furiously tried to dab out. I am hoping next time she just takes a blowtorch to my face to save time. My face is still a little burny today, but I am hoping we timed it just right for it to blister over and peel off for Halloween. Mask Schmask. I just slough off my own skin for my zombie costume. That's real commitment. No, in all seriousness though, I am pretty excited to see the results and trust Clare almost implicity. Almost. She really is great at what she does. I am a little curious if she has a facial that's a little more cuddly for the next round. Not that I am a wimp or anything....

Speaking of cuddly - even though I know you all have the impression that I live in my sweatpants under my Smokey Bear Pendleton Blanket (soon to be accessorized by new throw pillows), I generally am up and going at least by lunch time, and since I have to be at High School Cross Country Districts this afternoon, and provide the weekend commute for the cello, and try to vacuum at least a quarter of the Truck hair off the couch before we have a big "end of summer" (what? so we're slow!) BBQ tomorrow with like 4 whole friends, I should probably go take a shower. Plus I am hoping the water will quell the burning of my face for a minute. But first I am gonna listen to all the demos for Holidays Rule again. At least three times.