Things That I Pull Off

My cousin called me brave. I'd like to think I am  - except it was so easy. Of course so is falling out of an airplane, which is definitely brave. So I guess I will accept her accolade. A few weeks ago she (my cousin again) fed me her leftover Pineapple Curry, which was so good, I needed to have more. I think it was extra good because I happened to be working on the Wenatchee Complex Fire when she fed it to me and I was really over the camp food. Anyway, I found a place here in Bend that makes it pretty dang close to the original, which isn't really probably the original but since it was my first exposure to Pineapple Curry, we'll just call it the original. For expediency. (if you're curious, try it at Angel Thai in Bend)

So last night, feeling all homebound after lolling around sickly on my couch for two days, I decided to get a little creative with dinner. Let me tell you, I did this with some fear and trepidation, since my cooking efforts lately have not been coming off in Rachel Ray fashion like they usually do for me. It all started with the carmel that I made last weekend. Every year I swear I will boil it longer. I'll wait for that candy thermometer to bump over the soft ball mark. I will be patient. But every year, and especially this year, for some reason, I get impatient and start dipping my apples Too Soon. So I wound up with a 9x13 pan of caramel sauce instead of caramel candies. It's delicious, for sure, and my buddy and I have found a plethera of uses for it. For example: candy corn dipped in caramel is amazing, as are chips ahoy/caramel sandwiches. It also dissolves nicely in hot apple juice - which we use instead of cider because I am either too lazy or too cheap to seek out the Real Thing. I even smothered my last apple crisp (under the crisp part) with caramel sauce and it was amazing. Even though Josh never even noticed. Sometimes I think that his taste buds are all wired wrong and the only thing that tastes good to him is ketchup and chemicals. The man literally lives on Crystal Lite and Ketchup. Gross. Anyway, After the caramel fiasco, which was still redeemable, I got in this great I'm-cooking-from-scratch-for-fall kick, and successfully destroyed two entire pots of beans. How one can actually destroy beans, and more than one batch in a row, is pretty interesting, but lets just say it had something to do with first not cooking long enough, and then reheating too soon, and then overcooking altogether when I got bored paying attention to them. Good thing beans are cheap. And pots. Um.... But really, after spending three days and about $40 in scentsy trying to eradicate the smell of burnt beans (which is something akin to burnt hair) from the kitchen, I am definitely cooking gun-shy. That's what I get for trying to be healthy. And cheap.

Back to last night: I googled myself up a curry recipe or two and decided to make my own Pineapple Curry. I didn't have any chicken on hand but I had this shrimp in the freezer that I had been saving for some unknown occasion when freezerburn would be appropriate. So I made Pineapple Shrimp Curry. And It was good. I threw a little hot chili paste in so it was about 2 stars spicy (I am clarifying what the stars indicate to avoid the confusion I had when my cousin said her Pineapple curry was only two stars and I assumed it was poor quality), but even Aspen liked it. Mostly because she thinks she's awesome when she eats shrimp. I don't know why. Something about they have poop in them and she doesn't care? True to form, I didn't follow any of the recipes I found, but kinda jerry rigged one up myself. And it worked! Eat your heart out, Rachel Ray. 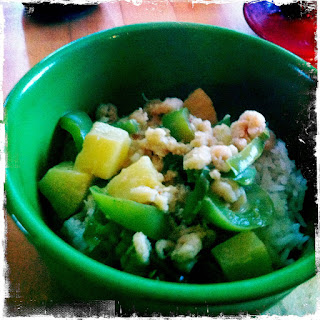 1 can coconut milk
fish sauce (a TBSP or so)
1.5 TBSP green curry paste (or red - but I had green)
soy sauce

I stir fried the shrimp, garlic, ginger, peppers and pineapple in the coconut oil with a splash of soy sauce, then whisked all the sauce ingredients together and poured over the stir fry in the wok and let it all simmer a little while. You can thicken the sauce with corn starch if you want but I just served it over rice. You can also add a little of the pineapple juice for more flavor. I added about a 1/4 cup.