Things That I Read

5 days into this fire assignment and I have polished off that many books. Whether that is because I haven't had good enough cell service to keep up on my perpetual rounds of Trivie, or I was just desperate to keep myself distracted from the Snickers bars calling to me from my lunch sack, I will leave to you to determine. Either way, I'm fairly proud of my accomplishment, even if the sum philosophical total of all 5 books didn't even sweep the periphery of Atlas Shrugged and its thoughtful depths, 5 books is pretty good. I'm not sure my attention span has seen this much discipline since I took an EMT class from an incredibly sexy teacher with a really adorable and distracting mouth.

In addition to the basic feat of reading these books, I would like to give mention to the vast disparity of subject matter they cover, all while weaving intimately together in a Kevin-Baconesque-7-degrees sort of way. Imagine if you will, beginning this literary barrage with the trite mystery novel by Iris Johansen "What Doesn't Kill You", and chasing the sickly sweet and cardboard flatness of a boxed Gewürztraminer with a sharp and complex shot of Oak Aged Whiskey, in this case "Inside Of A Dog" by Alexandra Horowitz, and then moving on to a good solid red ale microbrew in Sandra Brown's "Envy". If your palate isn't already reeling a little bit, throw in the dark, tangy merlot of Toni Morrison's classic "Tar Baby" and a thick, syrupy jägermiester chaser of viral contagion that is E.L. Brown's "50 Shades Of Grey".

(Authors other note: I get the vague impression that by using E.L. Brown instead of her full name the author would nearly like you to believe she is sexually ambiguous, a laughable consideration after reading a few short paragraphs that could only POSSIBLY been conceived from the needy, if not relatable, and emotional female soul.)

But let me give you my brief and altogether non-authoritative reviews of these 5 wildly varied reads:

In chronological order, since this is how I endured them.

"What Doesn't Kill You" nearly did. Kill me. I grabbed it, in all honestly, at Target in Wenatchee, because it was a) the cheapest paperback there that didn't have a bodice ripping woman on the cover, and b) it didn't have a bodice ripping woman on the cover. Not that there's anything wrong with bodice rippers, au contraire, in this instance I would ALMOST rather be reviewing "The Secret Mistress" by Mary Blalogh which was such a disappointment that I wouldn't even bother commenting on the one romance scene that I wallowed through almost 250 pages for. All I have to say about that book is that the picture in the front was HIGHLY misleading. But back to Iris Johansen, apparently a NY Times #1 best selling author, and the singular reason that I have so much hope that I too, can find someone desperate enough to publish my writing. This book was a murder/CIA/Russian mob/Chinese drug overplayed plot that was so hard to stay interested in that I actually used it to lull me into naps. Apparently some old Chinese dude developed this "superdrug" called Pandera (pantera and pandora, both much cooler sounding, were words already used) which the bad guys are trying to get in order to poison the One Good American Presidential Candidate, because Russian mobsters are largely concerned with making sure that good guys never win, right? But anyway, it comes out eventually that Pandera (SPOILER ALERT - quit reading if you are rushing out to spend $5.99 on the least bodice-ripping paperback in Target) is actually, in appropriate doses, the chemical fountain of youth that preserves life, heals traumatic injury miraculously and lets you live forever. The one glitch is that your hair will still turn white. Bummer. All that stem cell junk for NOTHING. Unfortunately in this book, most of the main players survived to go on to the next terrible plot line, but all of the totally ineffective bad guys died. The worst problem I had with this book wasn't even the dreadful plot, it was the dialogues between characters that worked as an extension of the writer's need for backstory and detail deliveries, which ended up reading like the most ridiculously unrealistic conversation ever. It's not as if we greet each other with an acknowledgement of a) your outfit in detail or b) the fact that we know your recent personal history. I.E.: "why hello, John. That cream colored chunky cable knit sweater and classic black jeans complement your salt and pepper conservative hairstyle so well. How are you recovering from the recent death of your stepfather from overzealous use of his massaging armchair. I was so sad to hear that you have been in inconsolable bereavement for nearly three months over it." Yeah. Don't write like that. Ever.

On to my next tackle: "Inside Of A Dog" - a self-help(?) guide to knowing exactly what your dog is thinking, extrapolated from years of testing, experiments, and the author's delightfully vivid interpretation of dogisms. The best part about this book, other than learning random doggie factoids about blind spots and urine message boards, is Horowitz' awe inspiring vocabulary. Her bio says that she worked as a lexicographer before her current gig as a professor of psychology, and I am not sure what a lexicographer does, but I am pretty sure that's where she came up with most of the really rad words she used throughout this entertaining book. White knuckle, hold-your-pee-cause-you-have-to-turn-the-page thriller it is not, but if you're into dogs, and I am, it's interesting. And extremely well written.

Book three was intended to be a chaser to Johansen's disappointment when I scrounged it out of a box of free bodice rippers that someone donated to the fire camp, but since Sandra Brown was also labeled as a NY Times Bestselling author, I proceeded with caution. "Envy", however, was a good book. Well written, gripping characters, and even though I had the plot unravelled 1/3 of the way in, it's a great plot. I'm just super awesomely talented at plot unravelling. It's all the Bones I've watched. (Speaking of which, Bones almost exclusively ends with the revelation that the first character they interview in any given crime IS the perpetrator. Watch a few episodes and you'll see.) But "Envy" was definitely a page turner for me. Just as you're getting over the all too familiar disgust of a debauched villian revealing himself, the bad-boy, damaged-goods hero sweeps you right off your feet, even through the infliction of necessary pain-for-justice temporary betrayal of true love self-flagulation. There were Charade-like elements of suspense and misguided romance, and if you don't know what Charade is, I strongly suggest you track down that Audrey Hepburn classic and avail yourself of a truly good plot line. But also read "Envy". If you're bored.

My fourth read was by far the most socially challenging read. More than intellectual, less than philosophical, inspiring and thought provoking, apparently Toni Morrison is required reading in those darn public high schools that I know so little about. I ordered this book off of Amazon as a feeble gesture of involvement in my buddy's book club. I had guilt for skipping several months of books and thought I'd try to dive back in. I'm glad I dove in on this one. The thing I took away from "Tar Baby", which is a story about black vs. white, black vs. black, white vs. white, man vs. woman, and all of the other myriads of struggles that come up in the quest for human identity, was the power of love between to people, balanced on a knife edge of choice. It seems like I have revisited, in at least three of these books, to some degree, this theme of how much can/will you sacrifice for love? How far our of your comfort zone can you be stretched, what principles and beliefs can you compromise, and still love yourself, to love the one you love. "Tar Baby" leaves that question unanswered but Morrison vividly describes a passionate love that made me realize I need to solicit WAY more sweet nothings out of my boy. Read it, even if you're not bored.

Book number 5 - part of me is totally resistant to even saying anything about this book because of the overhyped hype that it has already gotten out there. Skip the bodice ripping and go straight for whips and chains in this one (sans Rhianna, thankfully). I was reticent to read this book, because anybody that knows me, knows that for all my bodice-ripping, skip-to-the-dirty-pages talk, I'm pretty much a prude. BDSM is NOT something I am comfortable with really even knowing about, much less glorifying, but I was out of books, and the other EMT (who had also read it out of bored desperation) said it was really only PG-13 and not much of a guilty pleasure even. Of course, he was a boy, which makes his opinion highly questionable. I started out really liking the ultra-emotional affair that developed between the characters. Mostly because I'm still a 15 year old girl at heart and I also got sucked into Edward and Bella's romance before they were annihilated on the big screen. If you like reading about sex (scandalous), this book is right up your alley. Especially "vanilla sex". As soon as Christian Grey starts in on his self justified perversion (oops, is my prude showing?), however, I started to lose interest, but when I heard the resounding theme from Ana of "How far can I go for him" and saw her stretch, but ultimately draw a line in the sand, I was if course, smitten in true middle school form, by his crushing need for her that even stripped him of his control. Deep book? No. Strong plot, well developed characters? Meh, so-so. Relatable passion? Heck yes. In addition to sweet nothings, I'll be expecting Christian, er, Josh, to be throwing a lot more "baby"s my way. And while he's doing that, I'll be figuring exactly how far I would go to make him happy. Because I love him. 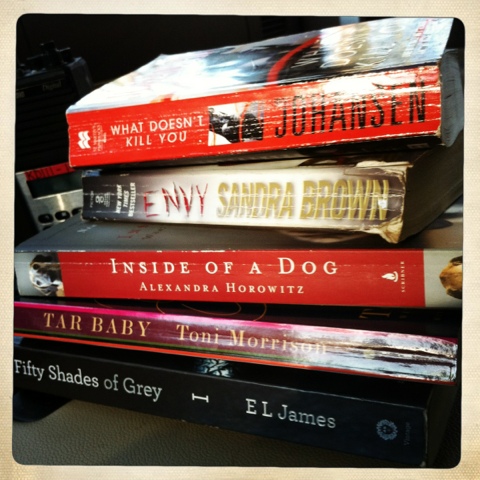