Things That Are Scary 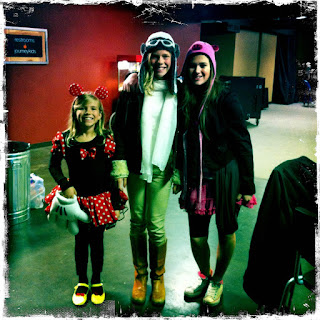 Halloween, in general, is a terrifying day. Not because I am worried about ghosts or zombies or chainsaw massacres, but because it is the one day of 365 when dressing like a hooker is A-OK whether  you are 5 or 85, male or female, and everybody is supposed to say "oh, how cute". I know this because I have done it, and it wasn't super pretty. Although at the time I thought I was hot stuff. I have made a concerted effort to not let my girls follow in my scandalous footsteps, and for the most part, it hasn't been an issue. Ok, Kizzie's interpretation of Strawberry Shortcake last year was pushing the line a little, but since I vetoed the green and white striped thigh high stockings, she topped of her outfit with more wholesome tights and baldies (chuck taylors, for the uninformed) that made her less cute and more cute(!). This year, since Kizzie was grounded for Halloween, I didn't have to worry about much at all. Natalee chose the cerebral Amelia Earhart, Aspen was Minnie Mouse (the clean version) and Halle was - well, whatever Halle is when she goes to school most days, but collecting candy. Diana was thrown into the mix for good luck and pulled together something resembling a pig on LSD. Since Josh abandoned me for more interviews I was robbed of the opportunity to dress up, since nothing says "save me" to the man with the over-accelerated hero complex decked out as Captain America, like a single mom in costume with 7 kids in tow. 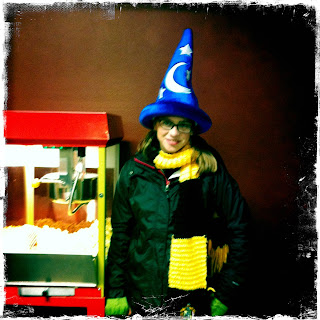 I was granted the privilege of driving my kids to the church we have been attending (every once in awhile) so they could hand out popcorn at the Trunk or Treat that was happening, rain or shine. As it turned out, it was raining, so the kids were both confused and dismayed that there were only three trunks to treat out of since most of them had relocated to tables inside. After we were home the kids realized that all the free candy they had scored inside of the church was actually part of the trunking, they seemed to feel less ripped off. So I got to sit somewhat awkwardly by while the kids spilled popcorn all over the floor and ate far more than they handed out to a billion little kids dressed like street walkers. OK, there weren't THAT many hookers - and there was even one little gorilla that was really freaking funny. My awkwardness was rewarded with free coffee, and I promptly decorated my cup with the glo-bracelets that they were handing out at one of the non-trunks. I kind of wanted to leave, but the incentive of free hotdogs and not having to cook really out weighed my resistance to looking to involved in a church activity. I have to say I was kind of disappointed that Pastor Keith didn't even dress up. 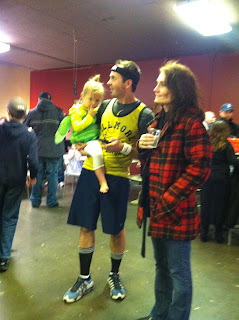 I think one of the most disturbing things about last night was the young teenage boys who clearly have no parents and were using Halloween as an excuse to carry around fake machine guns, wearing nylons on their head. I wondered if they were auditioning for the next school shooting, but I realized that they were probably all homeschooled, so then I felt better. I am super proud of the fact that I rushed my kids through regular trick r treating around our neighborhood in about 35 minutes, since I had rented a crappy movie (Snow White and The Hunstman, anyone?) that I was impatient to meet up with on my couch. Josh doesn't leave me to my own tasteless devices very often so this mouse had some playing to do. I woke up this morning, hung over from my diet of 4 boxes of confiscated dots and a hot dog, but I was down another three pounds, so I am ok with it.

And now I have to go back to work and try to remember how to be inefficient. Laters.