Things That Make Me Feel Old

This post is loaded with TMI. I am just letting you know up front. But I have to get it out. Now that it's been two weeks and the shame has subsided. I have to come clean.

I wet the bed. I did. The horror of it took several days to wear off, but when I finally admitted it to my sister, she reassured me that everybody does, so I came here, to find affirmation that I am not the only one. Tell me, please, even if you have to lie.

My sister also guessed the weird thing about this particular bed-wetting. "were you dreaming about peeing?" "um, actually, yes." "yeah, I've totally done that." "Thank God." Really, my dream was a bizarrely real visitation of my triumphant return to stage in a reprise of The Music Man, except this time I was playing the lead, and I really did dream that I was in that tiny ladies restroom in The Woodland Theater that we painted periwinkle blue in 1993. I told my sister that since the heinous event, I have decided to never take Tylenol PM again, which I had tried in lieu of a half of a hydrocodone to keep the pain at bay long enough to fall asleep. Turns out it also keeps bladder urges at bay, and then you go and dream about actually sitting on a toilet, and you wet the bed. Yes, I will forgo the sleep aids so that I can lie awake in paranoia of my newly acquired bed-wetting skill. In my own defense, I will tell you that I was so completely shocked, that I actually woke up mid stream and caught myself. I know, TMI, but I warned you! The trick was hiding the evidence from my husband, who of course woke up to me changing clothes (THE SHAME!!!) and wanted to cuddle. Gross. Who cuddles with bed wetters? Seriously. I had to endure at least 5 days of self-flagellation, which also involved investing in $50 in cranberry juice and capsules so I could blame an imaginary bladder infection on the incident if anyone (namely Josh) found out about it, even though I washed my wet pants First Thing the next morning. It seems like after being married for almost two years, a little bed wetting wouldn't be a big deal. Kind of like the time you threw up on his shoes, or when you had a really unfortunate case of diarrhea after a trip to Mexico (also a closely guarded secret)... just one of those things, right? The problem is, I married Mr. Clean. To my knowledge, in the two years since I have known Josh, he has never taken a crap. On the toilet or otherwise. God bless my Irritable Bowel Syndrome and Chronic Diarrhea, my pooping habits have become a mystery long discovered. I blew any fantasies he had of a crapless wife right out of the (toilet) water. I feel bad about this, but have to live with the shame. Having a husband who doesn't even break wind is a very far cry from the boyfriends of old who could win a county wide farting contest with a single bowl of chili. The last man I lived with taught my girls to compliment each other on the tone of their passing gas, and the push behind manly belches. Fast forward to the immaculate Mr. Weston, and nary a toilet seat is left up. In fact, Josh puts the lid down, on every toilet in the house, compulsively. This has become a marital issue between us (interesting switch up on the toilet seat debate, no?) due to an incident when I was about 7 years old and in a Very Big Hurry to use the toilet and somebody had put the lid down. All I remember is my Great Grandmother on her hands and knees mopping it up. There is a good chance my Great Grandmother had actually passed away long before that, and all I can assume is that her ghost returned to shame me from the grave. So toilet lids remain UP in my house. Now and For All of Time. Considering he doesn't even use toilets, I don't know why he has to go around closing them all for the rest of us.

While I am making confession, I would feel bereft to leave out the culmination of All Embarrassments (at least up until two weeks ago), when our family was staying at a Pastor's house and I got to sleep in the bedroom of the slightly older and reverently idolized daughter, just so I could wake up with a frantic need to pee in the wee hours and wet my pants all. over. the. floor. with my hand on the door knob of her room, standing parallel to her once slumbering head. She moaned and rolled over. I have hated her ever since. Interestingly enough, this same girl became my arch nemesis later on when I lived in the cult. But that's another story.

Now that I have gotten all of that off of my chest and on to your victimized mind, I almost feel better. I hope the rest of you get the chance to wet the bed and feel as human as I did. And as old. And as ashamed. I spent the entire next morning texting friends about bladder incontinence and whether I should rush to the ER or buy stock in Depends first. I even checked into reserving a grave plot, now that the inevitable is rushing up at me and I'd like to spare my kids that worry. Alas, now you know my deepest, darkest shame. If you keep reading, I hope to never trouble you with my bladder troubles again. (But you can bet if Josh ever cuts the cheese you're gonna hear about it!) 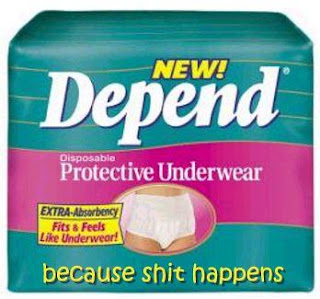