Things That Make Me Cold

When I married Josh, I conceded bed space to a ridiculous little black dog since I still wasn't entirely convinced that he wasn't just kidding about having married me. After a few months, I either stopped wondering, or didn't care, and vetoed the ménage a trois in favor of less contortionist sleeping positions. Enter Dagny, and my confounded guilt issues. It didn't seem fair to let the baby wiener dog cuddle in between Josh and I when the poodle had been so cruelly evicted. I rescinded my former mandate and Emmy relocated her position of Bliss between Josh and I at about knee level. By no coincidence about this same time I started finding myself wide awake at ungodly hours, like 5 AM, for no perceptible reason. At first I blamed the pain that was always there, waiting to greet me like a mean 2 year old wanting breakfast. But then, through chattering teeth, in my early morning dysfunctional state, I realized that I was in a constant struggle to keep the edge of the king sized comforter wrapped around 80% of my body. Let me add that by this time in Dagny's youthful evolution she has decided that sleeping with mom and dad is hot and claustrophobic and she'd much rather be pooping under the table and eating Christmas presents. Emmy was hoping we wouldn't notice that she was the only canine remaining nestled in the blankets, but my chronic hyperthermia has revealed her secret. Emmy has a special tactic of rolling and twisting and wriggling so that the covers all spin up underneath and around her in the middle and there is about a foot remaining on either side for Josh and I to contend with. Josh has craftily adopted a whole different blanket which he keeps stealthily on hand on his side of the bed, offering the excuse that our big blanket is too hot for him. Uh huh. How did it take me so long to uncover this sneaky plot between them to freeze me to death? At any rate, I've been awake since five, pulling covers from underneath a 12 lb. poodle an inch at a time and plotting her near-future eviction to the dog bed lying unattended on the floor next to us. How 12 pounds can be so difficult to move is beyond me. 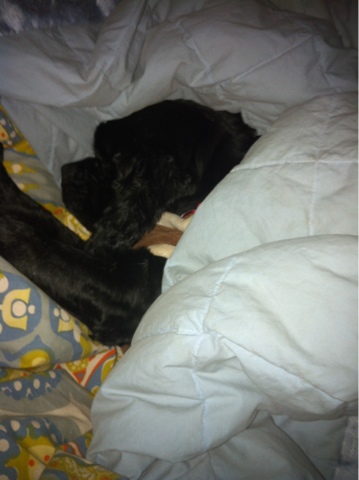