Things That We Are Good At

We have done a really good job potty training Dagny. She is very smart, and has already learned that right after she pees on the carpet she needs to go outside for a second or she will get yelled at. She dashes right out the dog door as soon as she is done pottying now, whether there is anyone yelling or not. It's a pretty cool set up. We have also succeeded in teaching the girls how to keep their wads of long hair out of the shower drain, by sticking said wads to the shower walls and then throwing them away after. Somehow the throwing away part got lost in translation, so now our upstairs shower is decorated with multicolored wads of hair. It's pretty awesome, I am not gonna lie. Another great success story for me is the personal record I hold for most unfinished cups of coffee in random spots around the house. I have just barely edged out February of 2010 and I would like to credit the over sized wonderfulness of my new Pendleton mugs for this triumph. In my own defense, I will say that I actually found a half finished cup the other day and reheated it. Twice. And still never finished it. It reminds me of Grandma Schiffman and the perpetual cup of coffee in the microwave.

In other news, and in the interest of honesty, I would like to issue a revision to the facts set forth in my Holiday Poem: three out of four girls are rocking straight A's, and I will leave it to you to wonder who could be the slacker. Obviously this information wouldn't fit the smooth-flowing format of my poem, so I took a little creative license. And was guilt racked for two days. But now I have made my confession.

If my ramblings seem disjointed and incongruent lately, or even unedited, I would like to cast sole responsibility on a very small hairball who is constantly either eating Christmas Presents or running outside to celebrate her most recent urination, and the fact that I am forced to claw my way out of my Pendletony nest on the couch to save gifts and rugs. I might as well give up because I am mostly succeeding in forgetting about my coffee and I think the carpet is past saving. This would be cause for distress except I know that there is beautiful hardwood underneath that we are intending to convince the landlords to let us uncover as soon as Dagny is potty trained, but since the world may come to an end before then, I am not holding my breath. And no, that is not a reference to December 21. 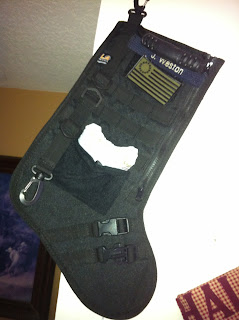 Today is my day off. Yesterday I thought I didn't work until 12, but luckily I called in to double check, and found out that I actually worked at 10, which was precisely 20 minutes from the time that I called. Somehow I still got almost everything done that I had wanted to, except showering, but I just threw some jingle bells in my dirty hair and called it good. I have another long list today, at the top of which is finishing my coffee, and then beginning to pack the smallish things that need to go North with us for Christmas. -- Stand by, Dagny is eating the area rug.--  Anyway, I have been losing sleep over the thought that I will forget things like Mom's turkey roaster rack, or Emmet Otter's Jugband Christmas (an absolute holiday requisite viewing, in case you haven't yet), or the stuff for Josh's tactical stocking that I have hidden in such an obscure place that I am not sure even I can find it. And by the way, yes, Josh has a tactical stocking, complete with molle strips and carabiner hooks. Obviously it will be filled with tactical tools. Like shot glasses. I have already conferred with Santa about this.

I also need to spend some time working on my eBay junk, shipping, measuring, messaging. One last push before Christmas, and every penny in the Paypal account means non-accountable spending for me! Or not. But I am doing quite well selling Victoria's Secret panties that I buy on clearance and sell for slightly over retail because somehow people who have figured out how to navigate eBay and set up a Paypal account haven't stumbled across the Victoria's Secret website. Hmmm. I am not complaining. --- Dagny is now UNDER the area rug. Trying to decide if it's worth unnesting to save her. Probably not. She can just chew her way out. ---

One major non-success in our life right now is that I taught Natalee and Aspen how to sew. How cute, you say. How mother-of-the-yearish of you and all that. It would be, but for the random misplaced needles I am finding on the rug, hanging off the coffee table, sticking out of the couch cushion just millimeters from Truck's elbow. I mean come on! Who leaves a needle on Truck's side of the couch! That's just mean! Apparently Josh lived as a child in a rental that had previously been inhabited by seamstresses of some nature who had a habit of dropping needles in the carpet. Several of these were relocated by various members of the Weston Family who would then have to remove them from metatarsal bones with pliers. This will not happen in my house. --- Dagny has weaseled her way on to the couch and is now chewing on the corner of my MacBook. --- So tonight we are going to have a needle safety debriefing, wherein I will pull gruesome pictures off of the internet of needle related accidents and strike a fear so deep in the girls that they will have to be sedated for Tetanus shots. 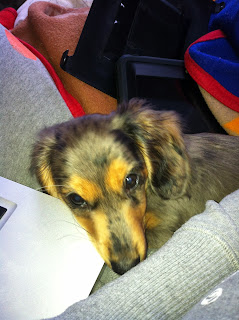 Well, I think it's time for me to go unpack the dog's stocking and dole out all of the chew toys we got for Dagny before she eats my technology. We are currently accepting donations of anything that you would like chewed up. And if you'd like a cold cup of coffee - stop on by!!
at 19 December