Things That Are Warm

Ok, so, some days I am overwhelmed with this fantastical desire to be a grassroots domestic goddess, cooking everything from scratch and blowing my family's collective mind with my awesomeness. I have discovered that such mind blowing is usually better achieved with a Papa Murphy's Pizza and Root Beer. In spite of this well earned knowledge, sometimes I still endeavor to appease my down-home urges, and in the instance of this frosty morning, once I found out I was out of canned beans all together, I decided to make this awesome soup recipe with dry beans, which are cheaper, but ultimately, maybe just as unhealthy since they are not organic, blah blah blah. Anyway, I didn't soak the beans over night, and since I am still recovering from the two failed pots of pinto beans, I decided to try something new and actually read the directions on the package. Weird. Apparently there is a quick soak method that involves boiling the beans for a few minutes and letting them stand for an hour, after which I will crock pot the heck out of all of them until dinner time. I will let you know how it goes, and even if it tastes crappy, I will probably dress a bowl up and tell you how awesome it was because I have already experienced more than my share of humility this week.

I am sharing this recipe with you, cut and paste from a Facebook Chat with my cousin (the one who likes low quality Thai Food), because it's much quicker than transcribing, and y'all know how I like to cut corners. I have made the recipe (as it follows) before and it is darn good. Especially with corn bread (because obviously, I am cool) on a frosty night when the leaves smell sweet and are crunchy under your feet. I am pretty excited about eating it tonight because I remembered that I bought a bag of Fritos in a weak moment the other day, which will be fabulous all crunched up in it. If the dry beans work out good, I will be pretty happy. If not, well, there's always Papa Murphy's. 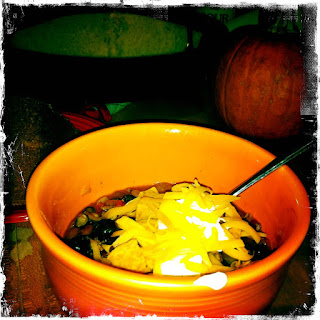 My Very Industrious Morning, which consisted of pouring unmeasured amounts of various beans into a pot and adding water, is fueled by a very large, very awesome cup (newly acquired from my workplace) of coffee that I was forced to embellish with Irish Cream since I forgot to buy regular cream last night. There is something almost naughty about drinking this early in the morning, but since it was forced upon me, I guess I won't wallow in the guilt for too long. Besides, it was supposed to be my day off, but I talked my boss into working me in for a few hours so I can afford the Super Adorable snow globe we're selling at the store. At this point Josh keeps asking how many hours he needs to put in to pay for my job, which is kind of silly, since he really only has to work like a half a day to keep me in business there. I mean really, it's a small price to pay for all the cool stuff I am getting. 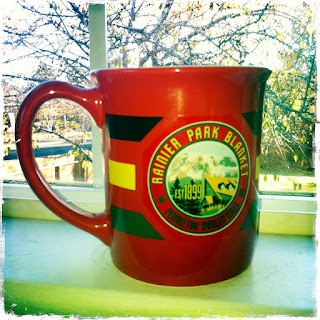 Tomorrow I am closing at work again, and since I came home to such rousing appreciation (read: no leftovers for mom) for the delicious enchiladas I made them last night for dinner, I will probably make something equally as sumptuous tomorrow. Or I might make my sister's Tortilla Soup, which is a recipe that everyone should have. I have had it several times, and lost it repeatedly, so this morning when I asked her for it again, she just texted me photos of the recipe card. She's getting smart. But now I have to look harder at the little pictures. Maybe I will do her soup next week. Is one soup night a week enough? Maybe tomorrow is a roast night. Or maybe it's a kids-eat-chicken-nuggets and I maneuver my way into another $9.95 prime rib dinner at Timbers, which, second to their happy hour finger steaks, might be the best deal in town. The last time I engineered that set up, Josh got creative and fed the kids one of the frozen "manicotti" that he bought at Costco, which they will only eat if we call it lasagna, since it in no way resembles "real" manicotti, which is a long held Stecker family tradition and I am sure I will share with you at some point. In the mean time, I need to go finish this Irish Cream and check my pot of beans.

at 14 November No comments: