There's something so magical about the six year old on his first memorable flight. Without question, after carefully examining all of the contents of the seat back pouch in front of him, the most important thing to do is test out every mechanical capability of his seat. Head rest extends and folds in, check. Seat back tilts to 83 degrees exactly, check. Tray table folds down and extends 3.7 inches, check. Underseat compartment in front of him measures 18x20" on the nose. Perfect for his tactical camo backpack. Arm rests up and down, and both fan and overhead light in good working order. Triple check. Lets test the attendant call button just so we're absolutely prepared for any emergency occurring later. Ok. We're good.

Yeah. This guy was sitting in front of Josh for our flight to Hawaii. But instead of six, he was pushing 50. I was relieved that he wasn't in front of me after we reached elevation and he made sure his seat was FULLY reclined. I always get a little claustrophobic with a seat back in my face. But then I realized that Josh had the aisle seat and would be using the ergonomic situation to his advantage every time I needed to go to the bathroom, which is often enough these days even without Starbucks coffee and the anxiety of being cut off by a seatbelt light at any time. I like to use the lavatory every 20 minutes or so in flight to make sure I don't miss the window of availability. And because I like saying lavatory. And because the soap in those tiny bathrooms smells really good. Josh decided it was too difficult to stand up for me to get out every 20 minutes, so oddly enough, he ended up with either my chest or my rear end in his face to squeeze by the leaned back seat in front of him. I'd be annoyed but it might be the most positive attention he gives me all week since I'll soon be competing with an ocean and a million skinny, bikini clad blondes.

Mom packed little adventure bags for the girls for this flight, which is really awesome, or would be, if they were sitting 10 rows back with total strangers. Considering these bags were 80% sugar 15% surface damaging substances (I.e. silly putty and crayons) and 5% pepperoni stick that made the whole plane smell like a smokejumpers socks, I would gladly share the enjoyment of these little surprise bags with someone that I do not know. It is now perfectly clear why mom was so insistent that they open their bags only after departure. She knew that if we had seen the contents previously they might have mysteriously vanished. I will say that I am thankful I am not my sister today, since she the same bags, and three boys half the ages of my kids. At least most of mine have outgrown experimenting with the effects of silly putty on the toupee in the seat in front of them, or testing the permeability of plane windows with crayon wax. I wish you luck Em.

The drink cart is almost here and I heard something about complimentary Mai Tais, so I have my debit card ready. 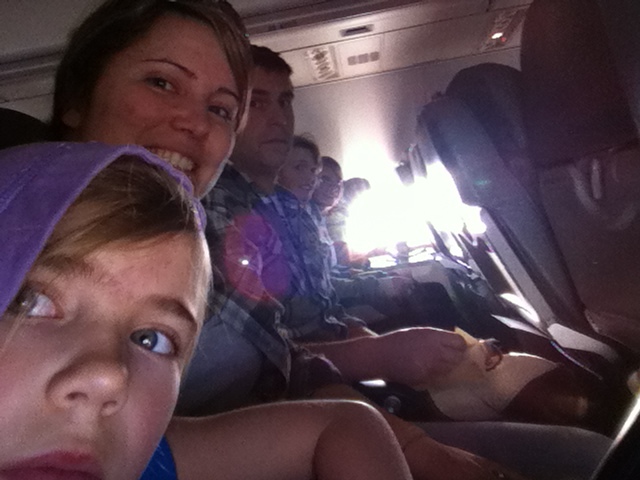