Things That Boys Do

My Husband has a bag fixation. when we first met, it seemed like an innocent enough fascination with military grade gear bags to carry his, er, gear. Since I have known him, (which just passed the two year mark) he has purchased four of these bags in various sizes, "tactical" colors, and styles, not counting a messenger style one that he vicariously ordered through his last young Paduwan Learner and somehow decided he could live without. His current Youngling gave him justification to order bag #4 by buying bag #1 from him at about 70% of retail. This is a great tactic for rationalizing shopping sprees which I would like to take credit for, but realize Josh was doing via Craigslist long ago. So now, my Adorable Man has three tactical, molle covered gear bags which he uses for a variety of applications, like chasing terrorists (i.e. high school daughters) and saving lives (i.e. fixing blisters) and rigging complex engineering structures (i.e. remodeling bathrooms). Two of these bags somehow got broken straps after said Husband decided to load 50-75 lbs of random junk from around the house into them to go on "workout hikes" up Pilot Butte. I have learned now that whenever the dictionary or my bean bag heat pack go missing, exactly where to look. I explained this to my sister when she was concerned about finding someone to walk to the store in Waikiki for a fridge pack of Pepsi. Josh would be much happier if she requested two fridge packs, but with the family sized ketchup that he will need to survive the week and a few other necessities, his workout should be ok.  He also doubles his gear bags as weapons carriers and briefcases for formal business meetings. On our last visit to Washington, I caught Josh preaching the Gospel of 5.11 Bags to our brother in law, Phil, who listened with wide shining eyes and a hint of drool glistening on his lips. Apparently right away, since it's only been two weeks since then, Phil ordered his own tactical bag for battling bad guys. I guess Phil hasn't discovered that you can also order Velcro military patches online to stick on the outside of your tactical bag and rearrange at will, a pastime that will keep Josh entertained for hours. Lest anyone think I am judging my husband for his bag infatuation, I have tried to correlate Josh's passion for these bags to something in my own life or wardrobe that I have displayed the same conviction for. I would relate it most closely to my fervent belief in Big Star "Liv" Jeans. I have converted many skeptical followers to the glory that is a pair of Liv's , and still wear nothing but. Of course, our pockets don't hold all of the Useful Stuff, but our rears look good, and that's what really matters. And, on a price point, my jeans are generally cheaper than his bags, until you count how many pairs I have. What? I fluctuate in size a lot.


So we are getting ready for a beautiful, fun and family filled trip to Hawaii. 8 days of paradise and children, which sounds slightly terrifying, but I will take the good with the bad. Josh issued the ultimatum that we will NOT be ripped off by airlines charging for checked luggage, so everybody gets only carry ons for the trip. This, in and of itself, it a hardship I find hard to swallow. 8 days in Honolulu is a minimum of 16 outfits, as my friend Shonda pointed out, not to mention at least three different swimsuits, and enough shoes to match all the sundresses. How will all of THAT fit into one carry on??? Josh was fairly certain that by utilizing the attachability of his tactical bags to one another he could pass all three off as one carry on, but when he couldn't lift it, we realized that A) the dictionary needed to stay home and B) the three bag concoction resembling a snow man would probably not fit in that little wire basket that determines the fate of a carry on bag. So he unbuckled them, took out the unnecessary weights, and began repacking. I think it was at this point that it dawned on him that Trauma Shears and a Smith & Wesson were not airplane friendly, and he slowly and painfully removed all of his weapon-like items from all three bags. I am fairly certain I saw a tear of regret sparkling on his cheek as he lovingly stowed his handgun and 6 boxes of ammo away in my underwear drawer, where we keep everything valuable. (This way, in case of fire, the guns AND the Victoria's Secret Lingerie is saved in one frantic grab.) All said and done, Josh came to the sad conclusion that one of his prized bags would have to stay home, since the only thing he really needed to pack was a pair of swim trunks, and it made better sense to put half of my sundresses in his bag to avoid the reality of a piece of checked luggage. I did let him keep his patches on to play with during the flight. Except the pantless female scuba diver pin up girl patch that he INSISTED was thrown in as a bonus freebie from the patch people to one of their best customers. My favorite one is the California Flag Bear patch that Josh got for me but has been "keeping safe" since none of my bags have Velcro patch strips yet. YET. 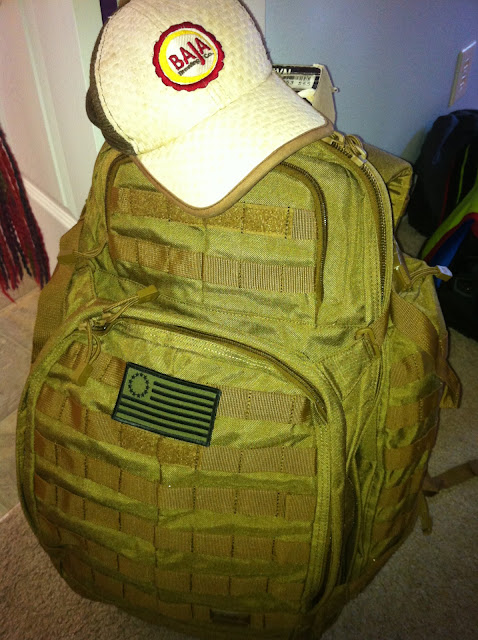 If you want a really cool bag, go here: LA Police Gear, or here: 5.11 Tactical. I don't recommend the gear pants, because they look really dorky with dictionaries in the cargo pockets. But both companies have been great to work with and replaced the bags with strap issues and immediately looked into engineering issues on their bags for people like Josh. They also have tactical stockings with molle strips, which of course I got Josh for all of his Christmas weapons, er, presents from Santa.

Tonight we leave for Hawaii, which involves a three hour trip to Portland that will be completely consumed with conversation about plane crashes and at least three potty stops. If you don't hear from me for awhile, it's because I am either blissing out on the beach, rearranging patches, or saving my nephews from sharks, but I can imagine this trip will give me PLENTY to talk about.