You gotta give it to My Boy. The hits haven't slowed down, and he's still going. In fact, the man is actually developing a sense of humor. This is largely due to the fact that I threatened to go back to Hawaii forever without him if I had to keep putting up with his bad luck AND his bad attitude. We had a long talk about stuff like that last night, and the part that stands out to me is when I referred to myself and my kids as the albatross and albatrosslings that haunted Josh's life, which he denied, since albatrossling isn't even a word, and he thought they were called goslings, which is even slightly more incorrect, and so we got off on some thesauratic debate and completely lost focus. While we were having this deeply intellectual conversation, someone was outside breaking into Josh's unlocked truck, which is incidentally NOT very difficult to do, and stealing his wallet and an armload of little miscellaneous stuff. Other than his iPhone cord (which is almost entirely likely one that he stole from me), the most important thing the punk stole was Josh's wallet, until you consider the idiocy of trying to steal Josh's identity. I mean seriously? Who in the world would want to be perpetually rejected, financially annihilated, emotionally devastated and tactically impaired on a semi-constant basis? I really kind of hope that his horrible luck is passed on to the idiot that stole my iPhone cord. Josh got his cards all cancelled pretty quickly, which probably wasn't even necessary since I had just drained all the accounts due to a new shipment of 48 boxes of blankets at Pendleton (speaking of Josh's bad luck).

Since the truck was broken into this morning, it only made sense that Emmy would need to go back in for an extra surgery today, so she did, since her skin repair was coming apart. Hopefully the new technique they are trying will work better. If not I think the next step is to hunt down a skunk or badger and use the fur to patch hers. I wonder if she will always smell bad if we do that? I'm all for leaving the white stripe and encouraging Emmy to try the punk look for a while, but Josh won't even let me get her a mohawk when I take her to the groomer for her bimonthly haircut that costs more than mine. He's so boring. No wonder he has bad luck.

Today was my day off. I would like to say it was my one day off so I can sound all dramatic about everything I have to get done in this one short day, but I totally had a 4 day weekend that is just ending today and only have to work every other day anyway. Apparently January sales at Pendleton are not justifying a full time schedule for me. Even though I work for about 50 cents an hour. All of that said, I still got almost NOTHING done that I was planning on since Josh highjacked me to run around and clean up the messes from his chaotic life all morning and then FORCED me to take a nap on the couch. I fought it tooth and nail, but he won. So here it is, all 5 o'clock and stuff and I have the guilt of the accomplishment of nothing to chase me through dinner and into my session with the couch tonight.

But before I can go and pretend to try to get stuff done, I have to help Josh re-bandage his poor dog - I am starting to wonder if him rescuing her was really that nice of him... 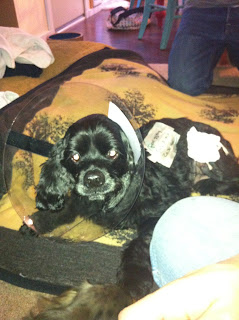