Things That That I Face In The Morning

The only thing that was harder to deal with this morning than the yelling teenagers fighting over the bathroom sink and the hair straightener at 6:15 was the half glass of wine on the window sill from the night before. It took me at least 45 seconds to reluctantly decide that it was too early to pound it.

My baby sister is here to visit me. She might actually be here to visit Ethan, who happens to be her boyfriend for a minute, but I would like to imagine she is here to visit just mostly me. I definitely appreciated the fact that the fighting hair-fixers this morning failed to remember their visiting Aunt was sleeping next door to the coveted bathroom sink. I would be concerned that she will never come back except she lived with us before and she knows the routine. A) yell louder than screaming children B) confiscate and possibly throw away offending hair appliance and C) curse under your breath and go back to bed with the pillow over your head. Sanna took the higher road and chose to ignore it and skipped straight to step C.

I think that I am in an extra good mood this morning since Josh and I had our first counseling appointment yesterday and the counselor totally sided with me that all of our problems are primarily Josh's. She gave him a whole bunch of homework and me a lot of sympathy. Ok, maybe that isn't totally how it went down, but she did say something to him about shutting his piehole, which I loved, even if she was kidding. She asked what it was we wanted to get from her, and I just told her I was basically interested in getting Josh fixed, since I was already so well rounded. She seemed to agree but had a funny expression on her face and wrote a lot of notes. Probably about what Josh needed.

I hope y'all know that I pretty much am never more than half-serious about the things I write. I am not sure if that makes me a liar or not, but if I wrote about things exactly like they are, it would be kind of boring, like: Aspen stole chocolate chips for her oatmeal this morning and Halle told on her, which is very ironic since Halle is the chronic chocolate chip thief in the house and everyone knows it. Also, Dagny is going potty almost exclusively outside now, except for on my bed the other day. And Ethan is extremely spoiled by his Grams, which makes me both annoyed with him and jealous. Ok, so I guess the real things are somewhat interesting. Maybe I should try to pare out the embellishments. But the counselor DID say the piehole thing.

Josh has some big plans for Valentine's Day. I am not sure what they are, but I have managed to deduce that now Ethan and Susanna are involved, and that makes me slightly more curious. Apparently it's serious enough that Aspen is going to miss Irish Dance, which makes me slightly more nervous. Surprises always make me uneasy, ever since one year I got a sweater for Christmas that someone thought was so "totally me" that I hated. I feel like it's so easy to get it wrong - like when I bought Josh a little gray Coach wallet to replace his stolen one. Luckily I realized before I made the erroneous mistake of gifting the luxury item to him, and sold it on eBay. The one I am getting him now was way cheaper, and even though it sort of screams 14-year-old-boy-in-camo, it is what he will like and now that I have ruined the surprise it doesn't even matter. My point is that big, drawn out surprises, how ever well intended carry with them the burden of guilt to fulfill expectations for not just initial reaction, but sustained use and fond memories over time. For example, Josh talks about how he got his ex-wife an AMAZING bicycle and it still haunts him how she never rode it. When he surprised me with an AMAZING bicycle, I was forced to ride and enjoy it, or at least feign enjoyment and surprise and wonderment. It is an AMAZING bicycle, and after fighting through my internal rebellion against the expectations, I do love to ride it, as long as there are no hills. Or cars. Or stuff like that. Surprises can be so sweet and awesome. I am trying to think of one that didn't overwhelm me with guilt... My last fiancee surprised me with a fiddle once, that he was mad at me for never learning to play. Josh almost got me a banjo last year that he was going to build from a kit but I caught him in time and redirected him,  since I didn't want to relive the fiddle, and when I get a banjo I want a good old used one, not a kit. He gave me a ukelele this year, which I love, and am excited to play, even though it's much fancier than I needed... I even took a lesson in Hawaii, but I have immense guilt for not having it out every day. I really do intend to. And now that the laundry from Hawaii is finally done, MOST of my junk is listed on eBay and my work hours are down to less than 20 a week, I should be able to get to it. After I make dinner. I am always terrified that I won't have the right response to a surprise. Like "SURPRISE! I brought you to this AWESOME Hungarian restaurant for Goulash!" And I have to be like "YUM!" when I hate goulash. I think that Josh knows me well enough by now that I should totally trust him in this. But that's really what it is, isn't it? It's trust. It's trust and control, and the desperate fear that a disappointing surprise means that my husband doesn't really know me. Doesn't know that I won't ride a bike, or eat goulash, or practice fiddle, or wear gold and pearl earrings (don't worry, he knows this!). It sounds so shallow and spoiled and superficial of me but I have to honestly admit that I get all tense and anxious when I start thinking about it. And it's because I want him to know me. I want to know him. I want to know that he won't like a really sexy gray pebble leather slim wallet from Coach. I want to know that he doesn't like goulash either. I want to know that he will never be disappointed with a surprise Cuppa Yo. I want to know that he could lead me blindfolded to my favorite place, every time. But then, it is shallow, it is selfish, and I realize that any surprise he gives me is because he WANTS to know me, and he is trying, and even if it's a slight miss, it's adorable and wonderful and I have a MAN WHO CARES. Really, who could ask for anything more on Valentines day, right? Other than Vosges Chocolates and fuzzy puppy kisses. I have a valentine who loves me enough to let his beard grow out for a month. I have a valentine who won't deposit money in the bank that he knows I will spend because he knows we need it for bills and he is taking care of us, even when I don't like it. I have a valentine that I can trust to lead me anywhere and I WILL enjoy the goulash. And the Bicycle, and the Ukelele, because all of the surprises that he brings to me make me a better person, a wider, more open, more happy and more loved. So bring on the surprise, Valentine, and I trust you to know me. 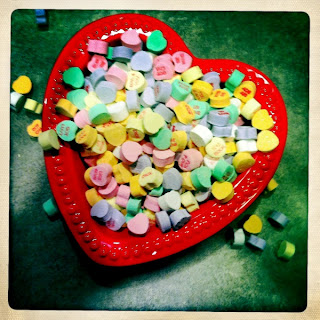