1. I am inordinately excited to get the Scentsy Easter Egg Warmer, which means I have to pressure as many people to buy Scentsy stuff from me RIGHT NOW as possible so I can get enough credits to afford it. So go to my Scentsibility page and look around and then tell me what you want. Or order right there. Either way I win.

2. I broke the 160 pound barrier!! This is somewhat like breaking the sound barrier for the first time for all of mankind, except it's not all of mankind, it's just me, and it's just a weight plateau that has been grinning evilly at me for months. 158.9 Kids. I made it. I was tottering on the 159.6-160.2 for a couple days but I didn't want to celebrate to hastily until I landed solidly under for a day or two. My horrible scale lied to me yesterday when I went in to weigh a package and said that I was 156.9. Which is ludicrous since I had just weighed in a couple hours before that, buck naked, at 162. And this time I was fully clothed. Why does the machine play such cruel tricks??? Why?? Anyway. Today was solid and for real. 8.9 lbs to go and I can get the tattoo I have been dreaming about.

3. Halle doesn't like chow mein. The slimy kind with crunchy noodles that is my absolute favorite. This is very exciting because that means my left overs were there for me this morning as a celebratory breakfast for both my weight milestone AND the release of the Easter Egg warmer. Halle had very seriously informed me that the left over won ton soup and pork fried rice were tempting her badly to eat them yesterday. I told her that she could have them but then renigged and said she should save them for Josh. It was very similar to the trick my scale played on me so I was probably just passing along the cruelty. I think saw a tear of disappointment glistening on Halle's cheek as she ate Macaroni and Cheese and leftover pizza.

4. Last night I got to go hold Desi's new puppy and my namesake. Marcus wouldn't let her name their someday baby after me but that's a long way out anyway and I probably would have lost interest in having a namesake by then, so she decided to get a puppy and name it Livia. It's really cute and fuzzy. I don't know why I didn't think of naming a dog after myself. It's pretty brilliant. I'd much rather have a dog named after me than a child because A) dogs are always cute and wonderful and you don't have to worry about having a namesake that is slightly embarrassing and B) I am kind of excited to hear Desi chastise Livi for pottying in the house and complaining about Livi making confetti and talking about how Adorable Livi is. Is that egocentric of me? I love attention in any form. I mean, I already have a niece that is sort of a forced namesake of mine, sort of. Baby OLivia goes by Ava or AvaJane or LiviAva (that's grandpa's fond nickname) or Baby Livi if I am around. But the O and the Ava kind of remove her from TRUE namesake status, even though she's totally cute and not embarrassing at all. I have faith that when she gets older she will start calling herself Livi, and then just Liv, because she will want to be just like her favorite Aunt. That's Aunt Susanna, of course, who also calls me Liv. Or livi. Or Livia if I am annoying her.

5. I got to see Shawn Mullins live last night. Live. His own beautiful voice. It was awesome.

6. Pendleton is doing a sale on blankets this weekend. Need I say more? Ok, I will say more - this sale is on factory seconds and discontinued styles. Which means the cheapest just got cheaper. Also, I get paid on Friday. Also, I have been kicking bottom (you're welcome, mom) on eBay so I can start paying my business investors back (you're welcome, mom - er... thank you?).  I have had my eye on this blanket since we opened up, but we run out of them as fast as we get them in. Right now we have a big stack of SECONDS in this pattern. WIN!!!! If you haven't touched the 5th avenue throw yet, you should just come to my house and feel Dagny's cheeks. It's pretty much the same thing. BTW, I am in love with my puppy. I really think that Josh should just put a pink bow on her neck and re-gift her to me for Valentines Day since nothing would make me happier. Maybe throw in some of those Chocolates that Victoria's Secret is giving away with a $75 purchase right now. Even Gift Cards count toward the $75. And the chocolates are so good, I nearly died from delight eating them last year. If you're curious, they are these: Victoria's Secret Chocolates. If you watch this video, I should be clear: you will not look this sexy when eating the chocolates. I know, I tried. So don't be all like "you said I would be super skinny and hot if I ate these!" Cause I totally didn't. If it seems like I am dropping any subtle hints here, yes, I am. Josh.

7. The sun has been out every day, and if you don't go outside, you could almost pretend that you are in Hawaii. But if you go outside, it's crisp and fresh and amazing. Like early fall, or late spring, except that it is February. If it snows in June I will probably pout.

I'll quit with 7 Things To Celebrate because I like the number seven, and NOT because it's God's number. I mean, maybe it is, but he totally made me born in 1977 so maybe that means that he super extra loves me or whatever. And on that note, I would like to leave you with this gem for your viewing pleasure: KISSES!!!

oh, to compensate for that, here is this: 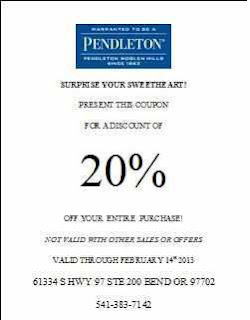