Things I Should Change

I need to take a new direction with my rambling. Something more productive and less ego-centric. Not about anybody else of course, because that is just asking for trouble. My intent was always to start issuing forth profound and meaningful essays on where you can get the best products in any given field, according to my personal shopping expertise. Somehow I got sidetracked, yet again, by emotional fru-fru fluff that is mostly useless.

I promised when I started spewing useless knowledge that I would do an expose of accessorizing - the dos and don't according to the conventional wisdom of most 6th graders, but never really got around to it. My own eclectic fashion sense has been undergoing a rigorous and not always graceful transition since I got a job that requires "business casual" attire - I am still learning the ins and outs of this. For example, pants with drawstring waists apparently err on the side of "Casual", and denim is never ok. This is somewhat like learning a foreign language for me, since I have always assumed that denim was the universal language of style. This whole theory was thrown in to question when my Loving Husband informed me that my cherished denim couch was , in a word much nicer than his, distasteful. I thought he was wrong until I had to lower the price three times on craigslist to sell it. It would be nice to think that I have the edge on objective style taste, but as I watch my random of assortment of eBay auctions over the course of a week, it strikes me as very bizarre that there are 42 people in a bidding war over a semi-kitschy tote that I got for free from Victoria's secret. Maybe being "unfashionable" really isn't such a derogatory thing. The flip side of that of course, is the intentionally unfashionable sector, also known as hipsters. If it's mainstream cool, you'd better believe a hipster won't be caught dead in it. Victoria's Secret Anything? PuLeaase. We just got a line of hipster apparel at work, Pendleton has developed the "Portland Collection" which is so uncool, that it's cool. The first dead give away that something we receive in belongs to the Portland Collection is the question of gender. If you can't decide, then it's most definitely TPC. We have gotten some beautiful coats and sweaters that are technically classified as menswear, but we're already having great success marketing them to the 60+ female customers in our store, who are delighted to find out that a small is simply swimming on them. And there is a gorgeous blue and white shawl? scarf? wrap? that I seriously want - but I am not sure for what? A couch throw? A Sarong?  This guy pulls it off nicely:

Now don't get me wrong - I am all for unisex apparel, as warranted by my collection of wife beaters and Levis 501s, but some of this stuff is taking it a bit far. And coming from Pendleton's biggest fan, That's saying something. Boys, just don't do this, ever, ok?: 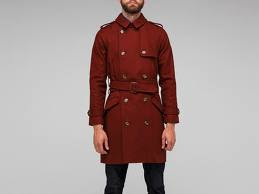 I am assuming this is a man since he has a beard, but maybe in Portland they are thyroid dosing for equal opportunity facial hair now?

These images are disturbing enough that I feel the need to purge my senses with a thing of beauty, and to indulge Pendleton in all fairness, I will share one of my favorites - and I don't care who/what you are, you will look good in this:

But back to Liv's Fashion Sensibility: or lack thereof - it is a frequent discussion topic at our house about whether or not Pendleton makes cool clothes at all. As long as my argument rests squarely on the foundation of the traditional men's wool shirt, I am golden, and I win. But enter the wide variety of seasonal lines, and I am sunk. Josh totally has it dialed in: Pendleton makes old people clothes. And I am not gonna lie, The Portland Collection is not helping my argument. Hispters are really just old people, early. The Pendleton Company itself maintains that it's customer profile is the 50+ demographic with traditional values and squishy checkbooks, but they are seeking to recruit a younger (but prematurely aged?) demographic, IE, the hipster. It is an untapped market that heretofore Thrift Stores and Estate Sales have completely cornered. Go Pendleton, you got this.

As I have been required to dress like a casually professional adult for this job, it was obvious that my wardrobe needed revamping, and this time NOT from the Victoria's Secret Pink collection. I have picked through the Pendleton Women's Wear very carefully and come up with a handful of skirts, cardigan sweaters and a dress or two that don't make me feel like I am on my way to my own funeral. I have had NO success with the slacks at the store, which is a shame since we have at least seven million pairs there. The only pants, in fact, that I have found to work are some tweed trousers from Eddie Bauer that fit semi-well but swish a lot when I walk because of the lining. This noise never ceases to make me VERY self conscious. I milked the drawstring linen pants from Roxy until my boss forbade them, and then when she left I wore them again and was karmically rewarded by blowing the entire crotch out of them while I was on the sales floor. That's the problem with favorite pants, they're always breaking. I have another pair of Eddie Bauer cotton twill slacks that I love but they are a size too big, and I have searched everywhere for them, and even Eddie Bauer can't identify them, even though they are from the Fall '12 line. Weird? I should say so. My boss has been proud of me in recent weeks as I have finally started to wear scarves as accessories (vs. implements of utility for warmth and wrapping wiener dog puppies in) to work. This is primarily due to the discovery of an entire line of wiener dog accessories that I stumbled upon at Coldwater Creek. Holy cow. Pendleton, Eddie Bauer, and Coldwater Creek - I am like a less cool version of my mother! At least most of her wardrobe is Gap and Levis! Apparently this "business casual" crap isn't doing much for my coolness factor, if I had one to begin with. I hope that when all is said and done, and they lay me to rest, if I am not known for my cutting edge style, they can at least say that I had some bad ass blankets. And wiener dog scarves.