So I am in the process of researching, once again, the best route to proceed with feeding the menagerie of dogs we have collected. It turns out that the nutritional needs of dogs have nothing to do with breeding, size or appetite. You would think that the more you pay for a dog, the less you would have to invest in caring for it, right? Kind of like a car. You get what you pay for. You spend $200 bucks on a rig and you can bet you'll spend the other $20K in shop bills. But with dogs, I have found the opposite to be true. If you pay $600 for a dog, that dog will also require extensive shop bills and a grocery tab that rivals your nine year old child. Incidentally, I am not talking about Dagny here. Anyway, with Truck's weight issues (I hope he's not listening, he's so self-conscious) and Emmy's skin issues and Dagny's eating anything she finds issues, we've run the gamut of pet foods from Ol' Roy to some boutique stuff I can't even pronounce. Since I found Josh, he has helped tremendously in the shedding of pounds from a certain pudgy hound, but ever tightening budgets have required us to diligently hunt down the best/cheapest way to feed our needy creatures. I have fantasized about making homemade, healthy dog food during my domestic binges, but have read that it's hard to get a good balance without ordering a certain cookbook, and we all know how well I follow recipes. After much research, including sitting through a somewhat tedious video on Dr. Mercola's website, and a long string of field trials, these are the winning options for our prized possessions:

OPTION 1: If we were rich, which apparently Emmy is, since she is either on a constant diet of this or hot dogs, we would feed all of the dogs FreshPet Select. I can't find mention of this food by Dr. Mercola's vet, Dr. Kathy Becker, which is either am ominous sign that this stuff is so bad that it isn't worth mentioning, or it cuts into the market for her pet food cookbook when you realize you can buy it for $12 a roll at WalMart. This is the only food that we have found that Emmy consistently does well on. This is the dog that could scratch all night long, setting world records for Cocker Spaniel Scratching Times, which happened around Christmas, while she was sporting the Jingle Bell Collar. The Jingle Bell Collar is another important investment for the torture/punishment of angry teenagers, until they figure out that they can remove said collar at 3 AM after 6 hours of constant jingle, and hide it under their pillow, where it is rediscovered around President's Day. Anyway, this itching of Emmy's finally and only goes away when she is eating FreshPet. She likes chicken best. Or I like chicken best. The beef smells, well, BEEFY after a few days in the fridge, and I am not super ok with that. This is also the food that Truck lost most of his bulk on, but at the time we thought we were rich (must have been fire season) so it was nothing to drop almost $100 a month on dog food. Which, realistically, is not that much more than we spend on option #2. Also, the dogs REALLY like FreshPet - probably because it's refrigerated, soft, and there are colorful chunks of real vegetables so they think they're getting leftovers every day. As if I would eat anything with peas in it. Gross. I researched the ingredients, and not only were they all pronounceable, but I actually knew what they all were, and would eat them myself - except for the peas. As far as I can tell, this might be the best and healthiest thing out there to feed your dogs. Dr. Becker recommend a fresh, balanced diet for dogs over any other - and notes that most homemade foods are not balanced nutritionally for dogs (hence the need for her cookbook). She also describes the effect of dehydrated (dry) foods on the body systems of a dog, and it is one of her least favorite choices for them. FreshPet is 73% moisture, which is vitally important for dogs with Kidney issues and urinary tract problems. The only problem I have with FreshPet is the price, and mostly because Truck should get a pound and a half a day at his size, which adds up QUICKLY. A 6 pound roll of FreshPet costs $13-15, depending on if you can overcome your pride and go to WalMart to get it. Other downsides to FreshPet are the refrigeration requirement, daily slicing and dicing (Emmy won't eat it in larger than 2 cm  pieces) and remembering to buy it every week. It does not freeze well, we tried. 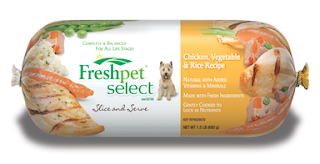 OPTION 2: There is no getting around the convenience of dry dog food. Although Dr. Becker says this option is in the low-middle of her preferences, there are some brands that use human-grade food and are well balanced, however moisture deficient. The best of these I have found is Acana - a Canadian company (those Canucks get a few things right...) that makes a whole-food, real-food, dry-food that is only 20% starch, which is pretty good for a kibble. Again, I like the chicken, or Plains (they market it according to enviro-regions) because the Ocean one smells too Oceany. This stuff is pricey - $56-76 a bag, which last us a little more than a month. This is food that Truck does well on. Emmy still seemed to itch but I think this month I am going to give it another run with her to see how she does... Acana created a new line called Orijens that looks even better, but I am going to price that out today and probably give it a whirl. To have all three dogs (maybe four?) on one food that meets everybody's needs would be RAD. Dagny's needs are fairly basic. Food. She seems to do well on everything so far, partially because she's little and made of rubber, and partially because she's not old enough to know better. At this point all we really know is that she prefers whichever food is in the other dogs dishes. Acana makes foods suitable for all life stages, which is nice. It doesn't require refrigeration, is easy to ration and is slightly cheaper than the cold stuff. If we can keep the water dish full, the dehydration isn't such a compelling issue, but apparently most of us are allergic to refilling the water bowl. Truck has gotten really good at making sure his collar clangs against the edge of the metal bowl as he licks the dry bottom to get our attention. This is our go too food when we aren't dead broke but don't have the time and money for FreshPet. We get it at Bend Pet Express, and they have a buy 12 get one free deal, but a couple other stores in the area carry it. 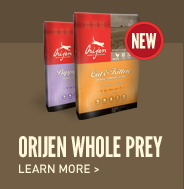 OPTION 3: There is a local company here in Bend called Orion's Choice that makes a decent, mostly healthy food. It is less than $40 for a 40 lb bag, and they deliver it to your door. This is super convenient, unless you forget to leave a check for them under the door mat, or forget to call them until three days after you ran out of food, etc, etc. They will even pick up the empty bag and recycle it for you. The ingredients are, overall, recognizable and healthy. It has more filler than I like - but it's decent fillers like oats and rice and lots of protein. Moisture is only 10%, so again, hydration is a big thing, but for the price, if you're gonna feed dry, it beats the heck out of Ol' Roy or Kirkland junk if you live in Central Oregon. I have really liked the customer service - I've talked to the owner at a trade show and over the phone, and they were nice even when I forgot to leave a check...

OPTION 4: This is what we have been feeding the dogs (minus Emmy) since we have been poor lately, and it has done ok, until the last batch, which seems to have unleashed a rash of the most heinous gas you have ever smelled. Nature's Domain Turkey Meal and Sweet Potato dry food has seemed to work ok for the dogs until this gas episode - I am not sure the food is to blame but holy moses, the other morning Dagny was sleeping behind my back and I awoke from a nightmare that I was suffocation in toxic gases, only to realize that I actually was suffocating in toxic gases. I think she burned a hole in the mattress, and I am pretty sure the smell is still lingering. Either that or my nostrils were stained forever with the smell. So I am reluctant to blame the food, which is similar in price to Orion's Choice, and pretty comparable ingredients - I would actually put it in close running with Orion's Choice if I could safely rule it out as the cause of lethal effluence. And it's at Costco. What is not to love about that? 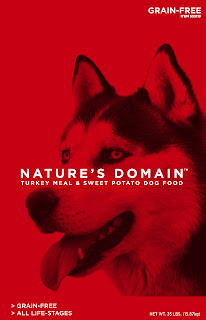 This question arises as we discuss the possibility of adopting an oversized wiener dog from the breeders that gave us Dagny. She'd need some love - and help. Then our kid to dog ratio would be even... 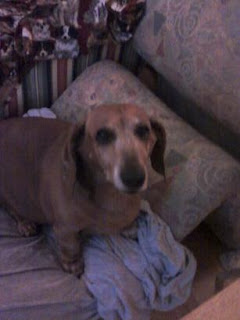