Things That Make Me Cringe

I had a little run in with the teenage wasteland this weekend, in the sense that Kizzie came home from a Sadie Hawkins dance with a Hickey on her neck and Josh wanted to waste both her and her "boyfriend". Not quite certain how to deal with the scandal of the child, or the scandalized father, I reached out to the world of Facebook for answers, and I got some great ones.

I remember being 15 and so completely swept away by the emotions that I identified surely as love and devotion that ran as deep as my core and a boy a year younger than I was. It's like karmic de-ja-vu to watch my very-much-like-me daughter go through the same death throes of childhood and make decisions that are really embarrassing. Like when I was ignorantly wearing my ugliest full support sports bra the first time I got felt up, and he had to open his eyes to make sure his grandmother hadn't traded places with me. Or the time I showed up in church as a newlywed with so many hickeys that the resident holy-loud-mouth commented vigorously on the type of bed mate I must have been. Or the time I wrote that note to a boy that made me swoon with every one of his manly chuckles and I was riveted upon, yet so grossly spurned my affection. It's hard for me to freak out about One Little Hickey when I am torn with understanding WHEN exactly WHAT level of physical involvement is permissible? Advisable? Safe? OK? I mean clearly none of my daughters will ever be old enough for sex. Neither was I. Kissing? Is it harmless when you're 5? How bout 10? 15 it becomes deadly? 20 it returns to safe? Holding hands? That benign little gesture of affection. Oh Lord, I remember the sweaty palms and trembling excitement. I still get it sometimes when he grabs my hand unexpectedly and squeezes it to remind me that I am the One Thing That Consumes Him. I have difficulty throwing stones from my glass tower of do-what-I-say-not-what-I-do. A certain dad-in-the-picture has no such issue casting iron clad judgements from his throne of righteousness and never-faltering will of integrity soaked steel. Maybe he remembers too well what a boy of 14 is thinking. It's hard to swallow though, considering he paints a picture of himself as an innocent, shy and sincere 14 year old boy. I really can't decide whether the rebellious, hormonal, emotional teenager or the panic-driven, emotional,  losing the chokehold of childhood disciplinary control man is harder to deal with. I have no question that the motives of each of them is so pure that they can taste the pristinity. I have no doubt that he fears, agonizes, heart wrenchingly about her safety: mentally, emotionally, physically. And she longs for him, for me, for ANYONE to understand the depth of her swollen heart (for the record, I've already addressed this: Things That Don't Get Enough Attention). It's a story that is thousands of years old and the common theme to any story involving despair, insanity and death, trying to reconcile the compulsion of love with the consequences of physical involvement. The old adage of waiting for marriage sounds ideal, but I have yet to meet a couple that has both waited until their nuptials to consummate their passions, AND remains happily married with a solid sex life. I am sure they are out there, I just haven't met them yet. Conversely, some of the most solid couples I know are still not married. But what is marriage? A certificate from the state? A covenant before God? A nod of approval from the father? And how does any cultural understanding of marriage suddenly make physical intimacy safe and good and whole? I would contest that sex is dangerous at any age and with any person and should be handled as tenderly as fine china. Obviously this advice springs from lessons learned painfully. All of my china got broke. Bad. If anyone has answers to these questions and at least 16 examples of the good fruit, please email me. Seriously.

Since I have no answers, and the ones from Facebook were all over the place, many excellent in totally opposing ways, I decided to just have a chat with the boy who inflicted the scarlet mark on my daughter. Publicly, via Facebook. Which was cheating a little since he and I are not FB friends (yet). I was fairly confident that he would see it, especially since I posted it on his "girlfriends" wall. I was concerned with the reaction Josh was going to (and did) have about the hickey, ahem, "curling iron burn" and decided to beat him to the punch by denouncing it publicly and slightly tongue-in-cheek to try to temper the temper. It didn't really work, because I got a very throaty lecture about having no standards and not having control of my kids, blah blah blah blah.

Anyway, here is the Facebook appeal to said boyfriend to pretty please, back the frack up off my kid:

Dear Boyfriend of my 15 Year Old Daughter:Last night Kizzie came home from the Sadie Hawkins dance with something on her neck that appears to be, for all the world, a hickey. Of course Kizzie is insistent that it is a Curling Iron Burn, which is fascinating since the only curling irons in the house are purely decorative as they haven't worked in at least three years, and we just keep them to jazz up the back of the bathroom door. Assuming it is NOT, as Kizzie insists, a hickey, and believing it to be a Curling Iron Burn, my only thought is that you must have inflicted the injury on her neck with YOUR curling iron. Clearly one does not come by such perfectly flowing locks without a little mechanical aid. That being said, I am going to have to ask you to be more careful with your curling iron in the future, at least until Mackenzie learns to treat such wounds with ample amounts of cover up. Don't get me wrong, I really like you a lot. Which is why I stopped Kizzie's dad when he emerged from the basement in his stealth tactical medic suit, complete with drug kit and several tubes of superglue, for which I can only IMAGINE his intended use, to head to your house for a friendly chat. The last person that I saw him outfitted in this manner for ended up with his hand glued to his mouth for a few weeks. Josh was nice enough to leave a hole for a straw so he could still get liquid nourishment, so at least you wouldn't have starved. The after effects from his knock out drugs are nasty, though. I managed to talk him down and convince him that every body has curling iron accidents now and then, and it won't happen in the future, I AM SURE. I am really glad that you like our daughter so much and take such good care of her, so we can certainly forgive ONE little slip up. Take care and have tons of fun at the next dance. In 2017. yours truly, Kizzie's mom

It probably won't help, but it's worth a shot, right? I am beginning to think that I really suck at this mom/wife thing, since I currently have 3.5 people ticked off at me. Some for being too strict, some for not being strict enough and some just for fun. Maybe I should really devote myself to the peddling of designer jeans. I could probably be good at that. All I really know is that the sun is out, my random playlist of crazy music is fun, and I am ready for some warmer weather and potato salad. 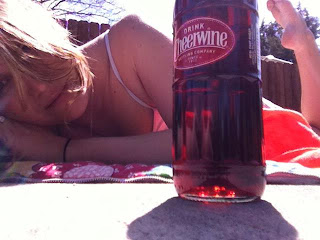