Things That Are Of Little Consequence

Last night when I climbed in bed, half way through a non-committal fight with my husband about something petty and ridiculous, I felt as though someone had stuffed cotton balls into my ears, up my nose and packed my sinuses tightly with the dense fuzz. It was convenient that I was mad at Josh because then I could blame him for me getting sick. Somehow in my phlegm addled brain it made sense. This morning I woke up with Josh curled up behind me, cuddling me with a handful of wadded up tissue, prepared to catch either the snot or the drool escaping from one of my facial orifices. Not that he was at all in the right last night, but he can sure be sweet - even when I am not. He left for work and I immediately returned to a coma like state, mouth breathing because it's the only passage for air into my lungs at present, until 11 o'clock this morning. I thought I felt better after I started drinking coffee, and chased the rotten melted cheese taste of mouth breathing away, but then I took a shower and was immediately overwhelmed with everything that I needed to do and the pounding of kettle drums in my ears. Luckily, being sick means I have an excuse to sit down with my coffee and my computer and ramble on about making lists and planning an attack on this house that for all of the world looks like it could have been in the path of the Oklahoma Tornado. And then I realized that the difference between here and there is that all of my stuff in still in one place, and for the most part, whole. What a nightmare for them to endure. To lose everything. But watching the videos and seeing the photos of the mess, the overwhelming theme of many survivors is gratitude for their lives, and the ideal that the most important things in life are not things. Watch this video, by the way: 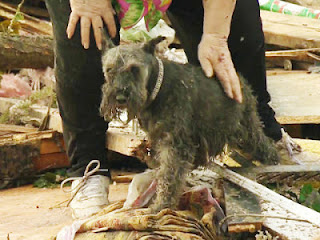 This Made Josh Cry. Therefore it is AWESOME


As I avoid packing my house for the impending move, the arguments between Josh and I about my hoarding tendencies echo in my ears, along with the throbbing pressure of snot infested sinuses, and I wonder if I should have less stuff. For me, stuff represents people. The china that belonged to a great grandmother that I barely knew, but somehow found myself following many of the same pursuits in life, means the world to me. Josh can't understand having dishes we never use. The vintage yellow high chair that stands at attention awaiting the visits of nieces and nephews and someday, grandbabies that I can't even fathom having, represents the ever-ready hospitality I want to offer my friends and family, along with the porta-crib and the the stroller (which we did sell at the yard sale. Some concessions must be made). The row of empty cheerwine bottles which I plan to transform magically into a swaying outdoor light fixture remind me of a wedding party that I picked everything for as a representation of the old fashioned, small town, unselfish, soda pop and front porch love that I share with My Boy and our whole family, not a token of my affection for The Avett Brothers, as Josh insists. The collection of band t-shirts that Aunt Tracey brilliantly suggested would make a great concert going quilt... All of these things are petty and impractical in and of themselves, but carry meaning and purpose to me. Maybe because of  how I was raised and the importance of family traditions to me, the stuff has become too important. Or maybe because Josh has yet to develop these deep roots of family affection, he doesn't get it, but I have faith that he will. That someday Granny's china will be as important to him as his fire department badges and medals, because just like those represent who he is and has worked to become, so my family heirlooms speak of how I came to be who I am. I wouldn't die without these possessions, they are just things. But they are beautiful things that remind me of the beautiful life that we are given. I like to be tied to life by relationships and things. Not that being a wandering gypsy with only the guitar on his back wouldn't be fun for a moment, but relationships are the things separate living from being ALIVE.

I guess the question of values is one of the driving forces behind everything we do. The things that motivate us to get things done and accept consequences, good and bad, of actions. For example, I am not starting laundry right now because it is more important to me to not move my head than whether Josh has clean boxers in the morning. This value will probably shift as soon as I take some cold medicine and I rethink the effect of no clean boxers. Or chocolate cake. Is it a coincidence that my face broke out like a premenstrual 14 year old shortly after Josh brought me home one of those fantastic All-American Chocolate cakes from Costco and I embarked on a sometimes twice-daily adventure of 7 layered chocolate? But are the zits worth the bliss of squishy chocolate cake and a cold glass of milk? I should say so. At least for this week. Whether vintage high chairs or clean laundry have any intrinsic value of their own is completely subjective, based upon the beliefs of any given person. For My Loving Husband, he would be overjoyed to trade baby furniture with or without historic value for clean underwear. Lucky for me this is not a logical trade, but I will do the laundry to avoid him tripping over the space offensive high chair on his way to find his boxers in the pile. The beautiful thing about the differences in our values is the balance that it provides for us. Without Josh, I would be a messy hoarder in dirty underwear. Without me, he would be, well, other than WAY less cool, he would have only his fire badges to remind him that he is connected to the universe in some way. And Emmy. Those dogs are the ultimate reminders of how lucky we are to have relationships, and what unconditional love really looks like. Even if they vengeance pee every once in awhile.

And that brings me to tattoos, and the reasons that I want to paint a picture of the mixed up crazy person I am, full of passions and full of life, on my body for everyone to see. Since I was a small person I have been desperate to be known as an individual, someone set apart, different, unusual. There is no worse fear for me than going unrecognized in my hoodies and jeans and soccer mom car as just another somebody. I shop at Costco, I watch TV, I live life. But I also KNOW things. Like Russian words and latin words and hebrew words, and I have a big and complex family. I am a firewoman (there you go, Josh) and an EMT. I started out as a little butterfly, testing my wings. I have accomplished the feat of not killing four children, so far. There are so many more things I want to say about myself, in full color, to the whole world. So they know. I probably need counseling for this, but I'd prefer to spend the money on tattoos. Sorry mom. :( I know that YOU know who I am , but what if I go unnoticed? That would be worse than driving a mini van. Nothing makes me happier than telling someone about my AWESOME little brother that scripted the motivating words on my arm in Russian. Or the baby niece that came, ever so briefly, to remind us as a family of how important we are to each other, and what we are capable of. Or the proud heritage of the men in my family that have served for our country. Really it's just overblown self focus. I like to talk about myself and these pictures give me a foot in the door. Someday maybe when I tell my story and it's a worldwide best seller I won't feel so compelled to broadcast my awesomeness in ink on my body. But maybe I will. I can never get enough attention.

I am frantically sorting through my aching brain to think of more words to say so I don't have to go do laundry, which will inevitably lead to cleaning at least SOME sort of path to the washing machine, which will in turn lead to packing junk in the garage, spilling over into the eBay room and then my bedroom, and rendering my entire day of lazy sickness totally wasted. But clean boxers. THEY are important.
at 24 May