I don't feel funny today. Not even a little bit. Maybe it's because I have a teeny headache right in the space between my eyes and my ears. Maybe it's because I don't have any cream in my coffee (which is ALWAYS a bad idea). My buddy was talking about how cream in her coffee makes her a nicer person, one that her family likes better, and I have to agree (I mean for myself, not you, girl - you're ALWAYS nice). Either way, I don't feel funny. I had a funny weekend. Really a hilarious weekend. One that started on Thursday morning in a cataclysmic fight with my Adorable Husband and careened wantonly into Monday with two sets of destroyed break pads on the road weary, kid weary, dog weary, work weary Denali. Poor old beast. Reminds me of me.

Sandwiched between these two life-and-budget altering events, we also tested the durability of the Mini Cooper against an oversized whitetail doe, with surprising, however expensive, results. We took 3 kids and 4 dogs camping across the state, the long way, because Google Maps prides itself on creative plotting and wanted us to take a tour of Diablo Dam and the phenomenal Washington Pass, which happens to be the northernmost paved pass in Washington state and also almost two hours out of our way. During this camping trip Truck didn't bite anybody, nephew Judah adopted himself into at least three extended family groups for family photos at the family reunion (that's a lot of family) and Aspen didn't change her clothes or brush her teeth once. I returned her to her dad's house in much the same manner I usually receive her.

The "Camping Trip" was actually a family reunion. The every-other-year opportunity to hang out in the dirt with my dad's brothers and wives, their kids, and their kids's kids. The adults were severely outnumbered by Children Nine and Under, which made the whole event that much dirtier. To be honest, there is something almost magical, in a grubby kind of way, of realizing that I am sharing the same blood and heritage with 50+ people in the campground, and to see flashes of my Grandma Audrey's face in my cousins, and reflections of my dad's awesome sense of humor in dozens of other people. These are my people. And with all of our very extreme differences, we are the same. It's an awesome thing, to know where you come from, and to bask in it, ever so briefly. I really, truly feel a sense of sadness for the ones who do not have what I have in my extended family, on both sides. I feel blessed and privileged to be a part of so many good, crazy, different people, and share the solidarity of common blood and history. I am proud to call them all my family. Except maybe Aspen, by Sunday morning, when her hair was matted and her face matched the path to the campfire. 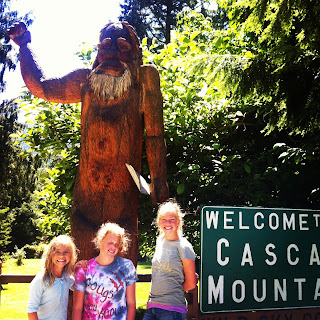 We decided to go the "right way" home, which worked out great. We started up Steven's Pass and shortly after we stopped at Mt. Index Coffee to take pictures with Bigfoot, Penny pooped in the back of the car. Then we came up on a wreck that had Just Happened. A jeep sat on it's roof at the base of a rock wall. Several people were standing around, none of them with any kind of useful looking skills, so we jumped out, and discerned that there was one occupant trapped in the car. Before the information was fully digested, my Superhero Husband was in the upside down Jeep with the elderly gentleman, while I was trying to put the pieces together from the three grandsons that had been in the vehicle with him when it rolled. Apparently he passed out at the wheel, possible due to some medical issue. The boys were all ok, as was one of the dogs (a dachshund, incidentally), but one of the dogs had bolted as soon as they got out of the wreck and was nowhere to be found. The man inside the Jeep was in and out of consciousness (either from the blood rush to the head or a pre-existing medical condition), and hanging by his seatbelt, but otherwise seemed to be unharmed. To the Jeep's credit, for a pretty rough wreck, there was almost no intrusion into the driver's compartment and the roll cage undoubtedly saved all four lives that day. As well as seat belts. Always. Wear. Your. Seatbelt. It took more than 30 minutes for aid to arrive, and by that time, Josh, me and some other random EMTs that had showed up, including one from Wyoming with real EMS gear, had mostly extricated the man from his trap in the upside down Jeep. This involved Josh squishing himself into the upside down passenger seat and leveraging the man under the headrests to us to slide up a backboard and out the back door. It was tricky. It was successful, and Josh was awesome. After we saved the world, we continued home, and took another questionable turn which may or may not have added a few extra miles to the trek. Stupid Google Maps. 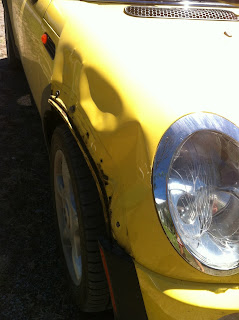 The wreck on Steven's pass was definitely more rewarding that our wreck on Thursday morning, which involved a Large Female Deer T-Boning the side of our Mini. I am not sure who was going faster, the deer or us, but we won, and in spite of an ugly looking fender and smashed headlight (which STILL WORKS!) the mini was still in full operating condition. I was surprised how well the little thing held up. Josh was still recovering from our Epic Battle Of Wills that morning and I think he viewed the deer as karmic justice for my misbehavior, since I was driving (too fast as always), even though the burden of the insurance deductible rested squarely on his Broad, Handsome and Totally Capable Shoulders. As if that wasn't enough of an unexpected expense, by Monday morning, after grinding our way down Sherman pass for the fourth time that week, both front and rear brakes went out on the Denali. By out I mean metal on metal, nothin' to grab on to, out. Hello $600 repair! But the little change of events in the day gave us a chance to go see World War Z at the illustrious Alpine Theater. It was good to get my zombie fix, since Walking Dead Season 3 STILL isn't on Netflix.

Anyway, here we are, it's Tuesday morning, and in spite of all of the comedic drama this weekend, I still don't feel funny. I guess I should go get some cream for my coffee, take a nap, and try again.

So I will leave you with a picture of a banana slug.... 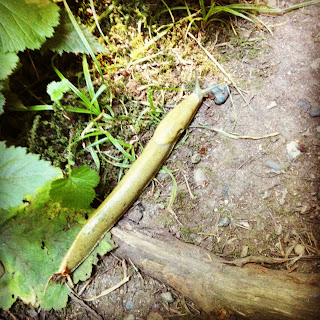