Thing That I Read II 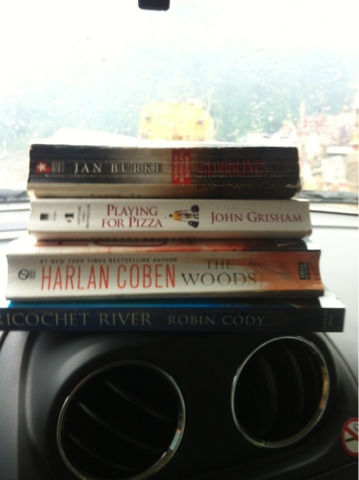 Ok y'all. It's reading season, which happens to coincide with fire season, and days on end of sitting on my aching rear end with no cell service, no one to talk to, and thankfully, few medical crises. So I read. Here's the first set of the summer, and my illustrious sounding opinions of them, rated, as most aspects of my life, in relation to my favorite snack food. Or not so favorite...

Awesome book. So much better than the movie, and I really liked the movie. Mostly because I'm a cheap date/easy to entertain... I am a sucker for pop culture. But this book is extremely well written, a compiled documentary style collection of anecdotes about the war of humanity against human rabies. Fascinating, involving, even as it jumps around from place to place and character to character, it pulls you in. Enough science to explain without losing the layman, enough drama to keep even me entertained, and piquing serious ethical/philosophical questions about dealing death to once-human beings. Reminiscent of Mary Shelley's Frankenstein in it's man-as god-role and the moral dilemmas thereof, it left me thoroughly prepared for the zombie apocalypse. Anybody  know where I can acquire a lobotomizer?  This one is buttery, delicious popcorn. With brewers yeast.

Um, scary? This is the stuff teenage nightmares are made of. The book itself wasn't horrific and terrifying, but Harlen Coben, who is new to me, develops thoroughly believable, like able, relateable characters and a gripping plot. Junk food reading I guess, but more cheezits than sour patch kids. You just can't stop. And your mouth doesn't get raw.

Meh. Kind of sappy story about a sucky football player. What more is there? I mean J.G. Can write good, but I ended the book thinking... Why?
Salted peanuts. Ok. If you're starving to death.

Good book. Thought provoking. Ethics challenging. Couldn't really decide if I totally agreed or totally didn't. It's like Atlas Shrugged - where its hard to identify the good guys because the good guys are really the bad guys and vise-verse. It raises some good things to think about, and it was interesting. Maybe not GRIPPING, but good. Raisins, or maybe dried cranberries. Good for you, tasty but they get old fast.

This one surprised me. It's a local Portland Author published by a local Oregon College writing about a local Oregon Boy and his coming-of-age about the time that the ecology of the northwest rivers went all to hell. I really got into this story and was really impressed by Cody's version of the ecologist - a steward, not a protector. Great characters, great storytelling. If you like those local-outdoorsy semi-greeny type books.
Cheese. Like sharp cheddar. With green apples.

This MAY be my second favorite of the summer so far, WWZ being first. I think I liked it because it is co written by a novelist and a for realz CIA operative, retired of course. In my mind that meant that it had to be at least mostly accurate, and probably drawn somewhat from real experiences. That's how I read it anyway. And it was fun. A classic spy novel with just enough twists to elude discovery until the last couple chapters, but still a teeny but predictable. I liked the main character A LOT, which is a little weird. If you read it, you'll know what I mean. Um... Swedish Fish, all the way. Delicious, and possibly healthy, in that they make me happy. FYI this book was a freebie at the humane society thrift store. ;)

This one was a bubblegum read. It was fun, but I got almost bored with the same 'ol mystery plot line. Plus everybody was super rich. It's like bubblegum. Pretty good but gets annoying and flavorless after a while. Like rice cakes with not enough peanut butter.  I like some of Patterson's other stuff WAY better. Especially when they star Morgan Freeman.

This one was a gripper. So much so that I actually stewed over the unresolved plot throughout my 1.5 hr drive back to camp and for several minutes that I should have been sleeping. It jumps through 20 year increments from 1936-1958-1977-2000, unraveling a complex tale of intrigue, murder, mayhem and revenge. I liked it a lot. But I was always sad to leave an Era and revisit the characters 20 years later when they're old. And then 20 years after than when they're really old, or maybe dead. I think I like my fictional heroes young and strapping and alive when I leave them in a book. The characters were very well developed though, except for the main one. Irene Kelly was a study in mediocrity to me. In fact, I couldn't even tell you what she was supposed to look like. I guess that makes sense, since she tells the story in first person. I mean, most of us don't go around describing ourselves in dramatic detail... But the plot was great. Recommend. Trail mix - complex, yummy, healthy, satisfying. But it definitely needed more M&M's.