Things I Think About


There is a task force leader here named Rattan. Is he named after porch furniture?

I had josh go to the store and get me celery and blue cheese dressing to eat here, because fruit is plentiful and vegetables are found only in the salad bar at dinner. I have been dutifully eating the fruit, at the expense of my stomach, to the point that it tastes like poison to me. The celery is awesome. Especially since Josh delivered it with a bouquet of bright flowers. AND blue cheese. He is, as always, my hero. But chewing through giant crispy stalks of celery, even with the not-fat-free dressing, leaves me feeling like maybe I just did an aerobics routine.

When one ear is burning, does that mean that people are sort of talking about me? Like peripherally?

Yesterday as we were driving off the fire line, josh decided, perhaps prematurely, to take off his yellow Nomex shirt. Technically we were still inside the fire, and yellows are supposed to be on in ANY proximity to the fire, but Josh was having shirt difficulties. Apparently he decided that it's too hot to wear a t shirt under his Nomex, but the Nomex on skin is kind of itchy and uncomfortable unless you have stolen some of the old school shirts, which he hasn't. So he's always in a hurry to get out of his yellow. Josh made several mistakes here. 1. Wearing Nomex without a t-shirt underneath. 2. Deciding to remove Nomex while still inside the fire 3. While driving 4. Without knowing where his t shirt was 5. Or knowing it was inside out 6. Or realizing the entire night division (12 or so vehicles) was coming around the corner of the Very Narrow Road. 7. Getting his wrist stuck in one yellow sleeve 8. Trying to hide his nakedness behind a narrow seatbelt 9. Looking extremely guilty when the safety officer drove by 10. Not just waiting til we were stopped outside of the fire to switch shirts. I feel like I probably looked like a deer in the headlights, riding through smoke and flames next to a naked man. The seatbelt really didn't hide much. I hope josh learned his lesson. It's just lucky we didn't have to stop and get out since I was already out of my fire boots. ;) 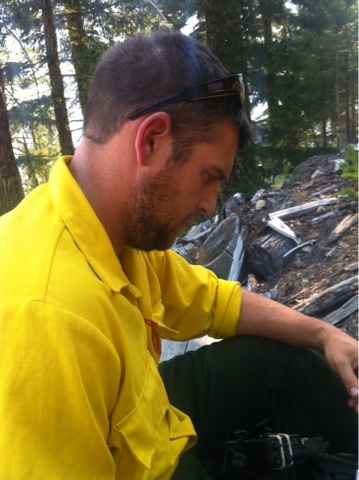