Things About Semantics and Peppers

Some of the recent events in my life have given me reason to pause and consider my verbage more carefully. The instance the other night of "yakking" vs. "throwing up" is a good example, but also, I received a vegetable in my first Bountiful Basket that I was unfamiliar with, and had to google it. I wasn't sure how to start, but being, what I consider to be a fairly intelligent and somewhat knowledgeable person in the vegetable department, I thought I could figure it out. First I googled onion family, because the vegetable resembled a cross between a leek and a dill plant. No dice. Nothing close. Then I googled cabbage family and was even farther off. Finally, when I hoped no one was looking, I googled wispy leafed vegetable and found this:


It was fennel. I have cooked with fennel seed, know what it is. Like it even. But this plant was not in my repertoire of known vegetables. Needless to say I deleted my dumb-sounding google search and covered it with exotic fennel recipe searches. All of that to say, sometimes dumb words get the job done better than grasping, smart ones.

Josh is always chastising me about semantics. And how mild exaggerations are far from lies, more just questions of semantics and properly embellished statement. I would like to believe him, but his semantics have caused some trust issues.

Words are like peppers. There are strong ones, and hot ones, and mild ones, and sweet ones, and it's important to choose the Right Ones for the right recipe, time, place. Dumping them all out on the ground doesn't help anybody, but picking them and preparing them and placing them carefully and in the right amount makes them worth their weight in gold. I am mostly saying that to make an awkward segue to my next subject. And to try to sound deep and intellectual, which I really am not feeling at all today, especially when I had to google segue to figure out how to spell it because spell-check didn't even recognize my attempt. 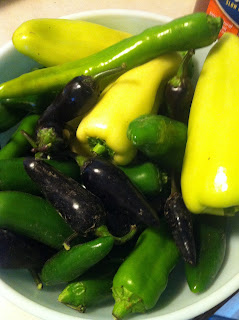 Yesterday Aspen and I went to town and got a million pounds of roasted Anaheim peppers from this really awesome couple outside of Kettle Falls who grow peppers of all varieties, just for fun. And to sell. For some reason, the market in NE Washington for peppers is limited to green bell peppers from Safeway, and my very dedicated friend Rebecca who cooks everything with green chilis because her husband is from New Mexico. Clive and Diane Price's gorgeous pepper garden is full of purple and green jalapeños, sweet gypsy peppers and robust Anaheims that are dropping like flies as the weather changes. If you want peppers and you live in the area, give them a call at 509.680.6989, and set up a time to go. They will pick your peppers, and roast them in their awesome propane torch roaster, and if you're lucky, they'll spill some on the ground and give you TONS of extra for free. And they might even throw in a rainbow. They are some of the nicest people I have met - but plan a few extra minutes (hours?) to chat with them about peppers. It's clearly a passion. They let Aspen crank the roaster for awhile, then Clive talked her into tasting one, and it was SPICY. She tried to fight the tears back by rubbing pepper juice in her eyes, and her constantly grinning bravery won her an ice cold coke from the Price's. If you live within a 300 mile radius, go visit them, you won't be disappointed. I came home with two HUGE pans of roasted peppers, and I only spilled one of them on the floor of the car when I locked up the brakes for a deer. Take containers to lay your hot roasted peppers flat in - any big pans will do. I stuck all of my peppers in the freezer as soon as I got home. I even included the carpet from the floor of the mini with some. Diane hooked me up with some recipes too, which I will share later if they turn out amazingly...