Today was a long day. It's my last day of "freedom" before I am expected to show up at work every morning at 8 AM, AMERICAN time, every day. 5 days a week. Forever. As soon as I got the call from the school, I thought to myself: This day shall be spent on the couch with no bra. This day will be a celebration of the departure of my leisure days. This day shall be unproductive. But I lied to myself. I caught up on all of the stuff I had promised to do for the fire department three weeks ago and had been putting off, since I could always just "do it tomorrow".  I made more applesauce. And then more applesauce. I framed concert posters that have been crying to me sadly from their cardboard tubes since the summer of 2010. I caught almost the entire population of fruit flies in our house in the glass of wine that I kept misplacing. I made tomato sauce and canned it. I painted things and folded things and cooked things and took care of business that had long been neglected for another day. My days are now numbered. They are no longer mine. They are obliged to someone else forever.

Josh is ecstatic. I think mostly because I will be less bored, more exhausted, and hopefully not have the energy to pick fights with him anymore, which he is convinced has become my full time occupation lately. His full time occupation has been remodeling our house, which, while utterly cool, is also utterly stressful, and not just to the dogs who are all TERRIFIED of power tools. I have been somewhat helplessly watching Josh manhandle 12 foot long sheets of drywall into spaces that are slightly less than 12 feet and try to turn them. I could have offered to help, but being generally weak, clumsy and also entertained by watching, I decided I was better keeping my distance. I have tried to help him figure out the maze-like electrical wiring in the house, by standing in the bathroom and shouting when the lights go off because he flipped a switch on the back porch, or tripped the breaker marked "upstairs". It's an adventure, this weird house. He's always discovering new and awesome things. Like an uninsulated roof, and a random post behind an even more random wall. He made some joke about how silly he'd feel if the upstairs fell down after he cut the random post out, and I can't help but feel relieved that my bedroom is on the other end of the house. He knocked himself out cold yesterday when he jumped up into the attic and banged his head on a post that was hiding deviously behind a chunk of insulation from a wall. I heard a moan and asked if he was OK, but he didn't answer so I figured he was up where he couldn't hear me, and I kept on chopping peppers. Later he told me that he thinks he was out for a couple minutes, but since I didn't bother to check on him, we don't really know.
Now the day is coming to an end. I have given up picking the fruit flies out of my wine and am embracing them as protein, riddled with healthy vitamins from the fruits and vegetables in my kitchen which they have been devouring. I canned a quart and a half of tomato sauce because that's how much there was. Not two quarts. Never the right amount. And I put the copious amounts of applesauce on the back porch in the remarkable cold to deal with tomorrow afternoon. After work. I am sure there is the equivalent of about 4.75 quarts of applesauce to can, just to be conveniently wrong. I have removed myself from kitchen to couch and now I sit here with three traumatized dogs. Penny is still too fat to get up, so she is snoring off the trauma on three cushions on the floor. Truck is watching Josh's reflection cuss out drywall sheets in one of the mirrors on the living room wall. Aspen is "cleaning her room" which, while I am sure is no more effective than her "washing the dishes" was at chore time, is at least out of sight and earshot. How a child can live in the same house as everybody else and know so frighteningly little about where things go, or how to do things, is amazing to me. Amazing. Kizzie is trying on homecoming dresses that Josh won't let her wear, while Josh is fantasizing about the colossal infraction that she will commit to forgo the Homecoming dance altogether. No one really knows what Natalee does in the evenings. She says homework, but I have a feeling that she is knitting sweaters for her pet rabbit or his soon-to-be offspring, or something as industrious and completely disconnected from real life as possible. I promised Josh we could work together late into the evening in jammie pants,  with our eclectic mix of Avett Brothers, Frank Sinatra and Florida Georgia Line, with a little Warrant thrown in, blaring in the backdrop, drowning out the pouty cries of grossly wronged teenage girls. He hasn't embraced the jammie pants yet, apparently they don't do well with tool belts. It seems my role in this labor of love might consist of offering moral support from the couch, keeping the dogs out from underfoot, and luring the fruit flies away from his workspace. It feels important. 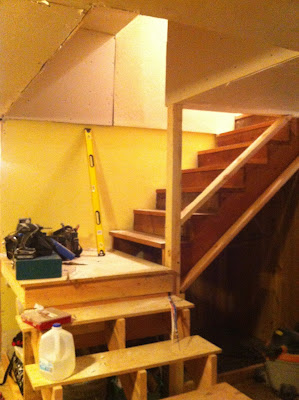 I know that I need to go take a shower and pick out my "first day of school outfit", which I already whined about not having brand new. I was shut down quickly with a very specific look and a couple of well placed words about my wardrobe, and decided I would make do. Taking a shower is officially the first step of "getting ready" for my new job, and I am just not quite ready yet. A few more fruit flies...
at 25 September