I know that my blog posts have MANY grammatical errors. Most are on purpose. The other ones are plausibly deniable as accidents since I do so many on purpose. I have a strategy. I know grammar. Especially subject-verb agreements. If I screw those up, it wasn't on purpose. But I demand grace. Punctuation wise, I figure I can do whatever I want. Poetic license, y'all.

I drink a lot of wine. Some nights a bottle even. Some nights, slightly more. Some nights, it's not enough. If I only drink a little, it only makes me keenly aware of how little I have had and How Entirely Much My Body Hurts. I have decided to err on the side of excess. It's working so far. I ran out of Prozac like a week ago and nobody is dead, that I have noticed, anyway. That means it's working.

I work in special education now. I always thought that special education was referencing the specifically designed teaching plans for kids with disabilities of all sorts. Turns out special ed is actually talking about what the people working with these kids are learning. Like how to shoot someone with a carrot out of your nose. Or how to flunk a test on purpose and nobody will make you read anything beyond a 4th grade chapter book, ever. Or how hand washing is a very good reason to run away and sit with your back pressed against a door for a Very Long Time, making your helper feel like an idiot that can't talk a kid into a little bit of personal hygiene. And coloring skills. MAD coloring skills.

I miss Halle. I sometimes cry when I think about her dragon pictures. And how they aren't here. And how nobody asks ridiculous questions except Aspen, who is young enough to justify it. And nobody eats All Of The Chili. I have been putting together a care package that can't possibly hold all of the things I want to send her, but then I get questions about What It Is That She Could Need So Badly That I Would Pay The Ridiculous Postage and I answer : ME. She needs me. She needs us. She needs stupid little pieces of her family, overdried apples and dorky hats she left. Her exorbitantly expensive Zorro costume and Aspen's instruction following test, which she failed. She needs candy corn and punkins and a lot of other stuff that wouldn't fit even if it would somehow miraculously arrive without shattering. I keep thinking I should just wait until we "go visit". But the visit keeps getting farther out of reach. Especially now that I sold my soul to the devil called A Full Time Job. I miss her.

I finally went to the doctor. I told him I finally had insurance and we should test everything, so we did. We found out that I need more Vitamin D, I have no STDs,  and that my back is not, in fact, technically broken. And then I found out that my insurance doesn't kick in until November 1st. I haven't figured out how to break the bad news to Josh, so I figured a public forum, where he can't yell at me and stare with those Big Incredulous Eyes, and make speculations about the Grave Amount Of The Bill, would be the safest. I am hoping, since the people at the clinic are nice, that they will let me make a lot of Very Small payments on the battery of useless tests that I had done. Including x-rays, which, last time I checked, weren't cheap. And before you remind me about the Affordable Care Act, or the charities that help people in our spot, I've already checked. We're too rich for charity, and even if/when I enroll in an ACA, it won't go into effect until January 1st, which is close to the time I would also be eligible for Tri-Care through the military, but by then, my new grown-up job insurance will be going strong. And I will be making Very Small Payments to NE WA Medical Group. Forever. But at least my back isn't broken, it just feels that way. 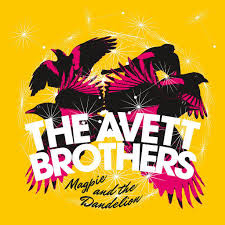 NPR released the First Listen: Magpie and the Dandelion on their website, yesterday, maybe, or the day before. Normally, when it is time for the inagural audition of a new Avett Album, I have time to sit, quietly, with wine, and deliberate on the wonder, or the disappointment (rarely, but occasionally) and listen. Not so much with this one. Here I am, two days late, with my wine, complete with an assortment of fruit flies. Dogs in my lap with drywall mud in their hair. Josh and the shopvac working merrily on the last of the living room walls (GOD BLESS HIM), and I am listening. You guys, I'll be honest: I liked I & Love & You. It was no Emotionalism. It certainly wasn't a Mignonette. It wasn't even a Gleam II, in my book. But it was good. The Carpenter was up a few ticks on my best of list. But still not Swept Me Away, Avetty goodness. But Magpie and the Dandelion, as if the name wasn't enough to win your heart forever, is good. It's old fashioned, raw Avett passion and exposure. Confession. Relatable Humanness. It is beautiful. I won't lie, I am as judgemental as the next judeo-christian backslider that can't get away from their guilt driven conscious and uneasiness about life in general, so I had a bit of a hiccup in the Seth scandal, whether he and his "January Wedding" bride split because of his TV star girlfriend or not. And truth be told, I have always been team Scott in all of my Avetteering. But I heard the first few lines of "Bring Your Love To Me", and I was done. Seth was exonerated of all potential wrongdoing. And then Scooter started into "Apart From Me" wherein Joe Kwon takes my heart out and chews it into tiny pieces, and it was all over. It's like Bush's "Glycerine", except Gavin Rossdale is a hick in this one, and the words make sense.  And the boys were back. Up on that pedestal of This Is The Stuff That Family, Community, And Life, Is Made Of. And then they sing "Souls Like the Wheels", which has been at the top of my charts since I visited Lake Tahoe with my mom in 2009. It's a good album. If you like raw, open humanness. Hurt and failure and Fixing It. I like it. Give me a hundred more listens and it might be in my top 5 albums. It's the old Avetts again. It's Seth crooning, and Scott pleading. And beautiful. And fun. Josh says it's negative. That's like saying that fall is negative. Everything is dying. But it's coming back. And it's beautiful. And it's sweet. And it's my favorite...

One more thing: I got sent home from school today for making a poor wardrobe choice. Not like Janet Jackson, more like all of the 9th graders at Northport High School, but not really. I wore a fire sweatshirt, from the Whiskey Complex, that, admittedly, has a logo that closely resembles the Jack Daniels label. A conscientious adult would have thought through the ramifications of this emblem, working in a special ed room, or any school, but true to form, I didn't. In fact, I was so desperate to just manage WALKING this morning when I woke up in Three Thousand Worlds of Pain, that I didn't care. They were kinda lucky I wasn't in Corona Beer Pajama Bottoms (half of the juniors were). Not that I own any... yet. But a parent complained that I was wearing an "alcohol shirt"; justifiably so, and I trudged home, in an aura of deja vu that threw me right back the years at Marble when I walked home from church, or dance practice, or prep school class, or drama class, or family meetings, or potlucks, or WHATEVER, because I was wearing something INAPPROPRIATE. It's like my theme. I am an adult. You'd think I would know better. But I think I spent so many years living in One Extreme, that I am not sure where the balance is anymore. AND I am a bit of a rebel anyway. AND I was told there was no dress code. AND it was cozy. AND the pain seemed more important. At the time. I might have shed a tear of injured pride on the way, but they'll never know. Unless they read this.

It's been a rough week, y'all. Compared to the week that my favorite Trent and Tam have had, mine has been a dream. I can't complain. But I do. And I will. And I am sorry.

These are my confessions. A few of them. I will have more later.