Chances are good that every muffin, cheese cube and danish has been touch-tested for appropriate firmness, moisture content and density by nine year old, recently sneezed on, fingers.

If you can't figure out how to work the milk machine, just drink half and half out of the tiny baby cups by the coffee. Sometimes they are warm, but it's not too terrible.

Plan on carrying at least an extra thirty pounds of carry on luggage, not including the iPad packed solely for entertainment purposes, the 23 bags of various and assorted snacks, two large water bottles (one was originally in her bag, but made it too heavy) and a good supply of Benadryl and dramamine for sedation purposes. In addition to your own necessary items, including some herbal version of a poor substitute for Valium, several small flasks of whiskey and for last resort, sleeping pills, you will be asked to carry her Sudoku Jr book, her My little Pony word find notebook, and both the pencil with the lead and the one with the eraser (since pencils apparently don't come with both any more), three contraband calico critters that were NOT supposed to be on the trip at all, and of course, the sweatshirt that is TOO HEAVY to carry but will be desperately needed later when temperatures in Southern California drop to below freezing and she shivers better than an insecure baby wiener dog. Don't forget to allow space for the accumulation of souvenirs as the journey progresses - giant leaves collected off of the ground, stuffed Donald Ducks of every imaginable size, and about 40 packages of honey roasted airplane peanuts. 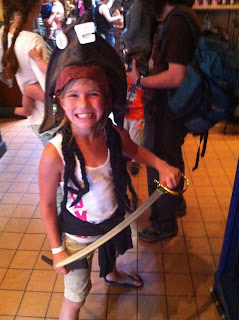 I recommend the same training for this type of travel as I do for the wildland pack test - a 30-40 lb pack of evenly distributed dead weight over semi rough terrain for at least 3 miles a day, or in inclement weather, a good 45 minutes on an elliptical. Not that I did this training, but I feel like I must have, otherwise how did I survive 4 days of California with a nine year old.

3. Sharing a Hotel Bed With a Nine Year Old

First of all I would just like to say: Don't.

If you must, spend the first night watching which side the nine year old spends the majority of the night facing, and orient yourself on the opposite side for all following nights.

I recommend acquiring a pair of padded hip and thigh hockey or football pants for sleeping in, unless you are good at sleeping on your side with your knees pointed protectively toward offensively thrashing nine year old, sleeping feet.

Cut off all food sources to the nine year old at least 24 hours before sharing a bed with them. This makes projectile vomiting onto your pillow less likely to occur.

Do not fall comfortably asleep at any point of the night when sharing a bed with a 9 year old, as this seems to be the impetus for projectile vomiting onto your pillow.

If the nine year old starts talking in her sleep, get out. Now.

Regardless of how many times the restless nine year old trades you pillows in her sleep, YOUR pillow will still be the preferable target for all projectile vomiting.

Feeding nine year olds at Disneyland, or anywhere within a hundred mile radius, is a bad idea. So is pepperoni, black olive and pineapple pizza. Especially when it is running in fluid form off of your pillow. Papa John's may be ruined forever for me, which is saying a lot.

The worst thing I can imagine coming home to would be something like my house being burned down, and all of my dogs dead, or the coffee cream completely curdled.

Coming home to a house that smells like a petting zoo, three pairs of chewed flip flops, and sheets that have clearly been the rolling spot of choice for muddy Cocker Spaniels for a week, really isn't that bad. My Wonderful Boy was even smart enough to leave the filled-but-dirty dishwasher and clothes washer open so they didn't encapsulate wonderful smells for me to enjoy when I opened them upon my return. The sheer volume of destroyed property from a 10 month old dachshund and her cohorts who were left alone during the 4th of July holiday and all of it's anxiety causing noise was impressive. Even for Dagny. To cap off her welcome home celebration she got up sometime during the night while I was finally enjoying the unparanoid sleep that didn't involve a nine year old and ate one of my new Sanuk Flip Flops. How can she be so cute and so bad all at once? Kind of like the nine year old.

PS - A few traveling tips for Disneyland victims : there is NO good coffee in Disneyland. There is also no alcohol. California Adventure has both, but it's a long walk. The Disneyland train will kick you off after a full circle. But you can ride the monorail forever. It also has tinted windows and makes you harder to spot for searching family members. Elbows, Stroller Wheels and Wheel Chairs are all permissible weapons in Disneyland. I recommend the acquisition and use of any or all. And corndogs. The corndogs make it all worthwhile. 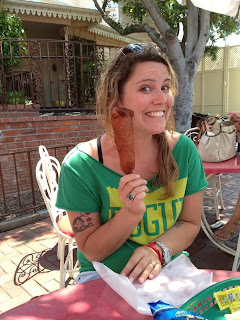