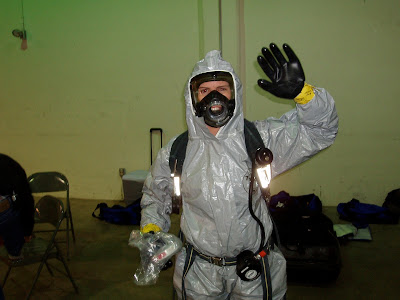 I am a feminist by no means. I am 100% in support of the idea that women can't do exactly everything men can do, and certainly not as well. The reverse is also true. I won't deny that I feel like we got the short end of the stick in some ways when nearly every function of the quintessential housewife is a thankless task that is usually undone before it is finished being done. For anyone that has changed a diaper, washed a dish or a window, picked up legos or vacuumed a floor, or made a batch of jam that was so good everyone ate it out of the jar in spoonfuls, you know what I mean. Guys, in a completely broad sense and definitely generalizing way too much, get to do things that stay done. Like build houses. And fix cars. And stuff like that. It's a completely irrational envy I have since I could have decided 20 years ago that I wanted to go to college and become something cool. Say an astrophysicist, like my cousin or something. Or an airplane pilot for missionaries in the jungle. Oh wait. I did decide that. But at the time, in a world where "college is no place for young ladies" I settled for my next best fate with an exotic-ish man who had seen an Entire Semester of college. That didn't work out so well, so I went to college anyway, when it was apparently a little safer for young ladies, and got a degree in something that is mostly useless. I have done many crazy and cool things. I have skydived over Hawaii. I have hiked on the Great Wall Of China. I have helped a Ugandan Doctor in surgery. I have touched the Berlin Wall, I have been inside of several burning houses, and upside down cars. I have done CPR for 50 minutes straight. I have flown in helicopters and walked through burning forests and been stalked by a mountain lion. And I have done many "boy" jobs. I have been a firefighter (enter discussion with husband of the appropriate use of "fireman" terminology in our household - I maintain he calls himself a "fireman" just so he can say he is something different than me and I can't compete with him. I am insecure.), an EMT, and Archaeologist just like Indiana Jones but without the hat. I have been a ATV trail builder, and ATV trail monitor, a forest firefighter, a painter (if you don't believe me check out the Sauvola building in downtown Northport), a purveyor of hardware and building supply, farming supply, a bookkeeper, and many more things. A lot of which are "traditionally male" roles. And those are the ones I like the best.

Not because I hate being a girl. I like being a girl. I would feel really weird if I was a guy and had armpit hair and stuff like that. But I am not the kind of girl who has ever really experienced the elation of childbirth or childrearing or anything involving the word "child",  like I have heard many women proclaim. I have never had my soul refreshed with the proud fulfillment of a child's accomplishment. I am proud, yes. And I adore my kids. As the individual human beings they are, not as an appendage of myself. Anything awesome they do is almost entirely their own gifting and the sheer grace of God. Lord knows mothering, housekeeping, "traditionally female" roles, are mentally and psychologically much harder work for me than actual hard work. I don't like being unthanked, unnoticed, undone and presumed upon. In any area. I am sure in the same way, that my husband doesn't like being relied upon and expected to pay the bills somehow, by the sweat of his brow and the strain of his back. Bills that are always waiting to be paid the very next month. Bills that only seem to increase no matter how your lifestyle decreases. I am sure he feels, like me, that every hard thing he does goes unnoticed and unappreciated and simply has to be redone. But we get to look at pictures of beautiful tile jobs he does. And buildings that spring up from the ground in two days and stay there for a hundred years. Probably it would be kind of boring to look at pictures of the laundry I folded and the floor that I swept. And every batch of jam I have made has disappointed on some level: too runny, not enough fruit, too many seeds... And there hasn't been a single dish that I washed that has paid a cent of the bills. That just makes me mad. I know it all has to be done, but the things I do, in my mind, are worthless since they don't pay, and they don't please. And they don't fulfill. And they don't entertain.

I have actually come to a point in my life where I like to take care of my house. I like to do laundry and clean things up so that I can sit down and enjoy it for 4 seconds until Dagny dumps out her toy basket and the dryer buzzes. It is a good feeling. But it's nothing to write home about. Or text my husband pictures of, unlike the colossal landscaping project he was working on. It's sad really. I know there is value in my time and the things that I do, but it certainly doesn't seem tangible most of the time. I would much rather be making money or entertaining someone. Josh was a little puzzled today when I didn't want to go with him to do some of his work stuff. None of it was anything I could have helped with, but I could stand there with the pink flamingos like a lawn ornament and listen to him talk, or think of something interesting to tell him, and since I don't do anything else with my day that really matters, why wouldn't I go? I knew that I had three loads of laundry to fold, a sink full of dishes, and of course I could foresee that Dagny was planning on doing this: 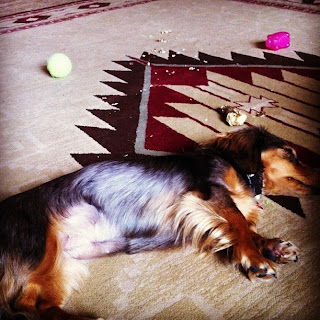 Which really meant that I could have a productive day at home. Even if nobody noticed. In fact, I could probably EASILY convince Josh that I sat on the couch and did absolutely nothing today, since I have no doubt that Dagny will make that exact same mess right after I vacuum for the second time today.

Sometimes, being a girl stinks. Or maybe just being me stinks. When I am better, I will do "boy" things all the time and will be noticed. Or maybe I won't. I guess over the years I have proven to myself that I CAN, and now that I have my Wonderful Man, I don't HAVE TO anymore. But I am so worried that people will forget that I CAN. And think that I am useless and sit on the couch all day long. I know what I am capable of, what I have accomplished, what I have in my rucksack of experience. Why am I so worried that everyone else, especially Josh, will forget? That I will just be swept over in the vast history of American housewifery as one of the masses that raised the next wave of housewives and breadwinners? I don't mind being one. But I want to be more. It is selfish and ego based and wrong, I suppose, but after 30 some odd years of fighting it, I give up. I give in. I will keep carving my rebellious niche in this little world of mine so that at least my kids can say that I never quite fit, and maybe they will be glad. But I can still make good jam.