Things About Near Death Experiences


Ok. The cool thing about near death experiences is that you don't actually die. No matter how close you come, you can't die. Because then it wouldn't be a near death experience. You never know how you'll respond to imminent death, all up in your grill. My first thoughts were A) how ticked my kids would be to miss the Avett Brothers show in October, and B) whether I was wearing my super grodiest undies for when the medics (who would inevitably be friends of mine) cut the clothes off of my body. The final decision to NOT die was based entirely on the memory that the side of my bra was twisted and I hadn't bothered to fix it so I would look like a blind three year old had put my under garments on. Clearly this would be an unacceptable condition for body discovery.

My near death experience started when one of the other medics brought this huge native kid into the med unit from the line with some sort of a "sting". He was pretty sure it was a scorpion, since his face and arms were "tingling". This is type 2 firefighter speak for "I got a pine needle in my shirt and I am tired of working." We gave him some Benadryl and made him sit in the sick bay for awhile, but pretty soon he realized the medical unit was even more boring than the murky pond next to an old mine where his crew was hanging out, so he asked for a ride back. 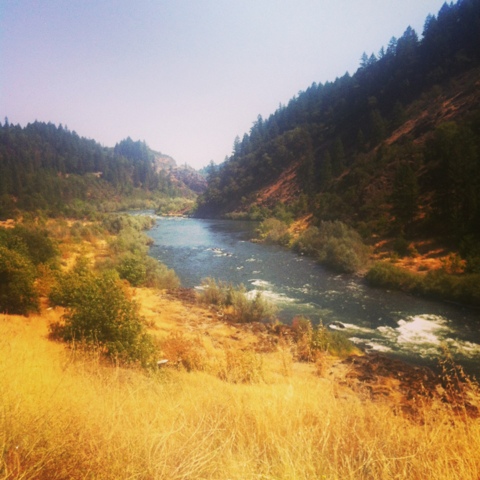 Being in my fragile condition, my team has graciously made it possible for me to do work around camp instead of hiking into poison oak laden gorges of sharp rock. As we've already established, the medical unit can get pretty boring, so I volunteered to drive him up to his crew. Most of the drive was spectacular, up the Rogue River, twisting and tumbling into yellow green hills that stood like gnarled rock sentinels guarding the path to the ocean. We turned off on a narrow gravel road with a sign that said "Last Chance Mine", and weaved our way up the deep ravine. The road was one car wide. Only one. Not one and a half. Not two. I was rambling on about how two way traffic on this road would be a nightmare, blah blah blah. We got to the top, or at least the end of the good road, where some crazy person lives. Tingly-Arms said his crew was up a road that only barely qualified as one, and that the other medic had driven it, so it would probably be ok.

A couple things to know about the other medic, Gary, is that he is in his mid sixties, has worked for Fish & Wildlife for 1000 years as well as raising cattle and several kids. He can't hear a thing, and I'm pretty sure he doesn't feel much either - I have worked with Gary a lot and I really truly like him. But Gary has absolutely no fear of death. He is an animal. Of course he drove this hill. In his F&W truck. Casually, I'm sure,  not even noticing the insane slope or the deep water-worn trenches and frost heaves around mastiff sized boulders. So here I go, up the hill. I did have the foresight to put my rental Jeep Pioneer in 4WD, which may or may not have saved my life. Tingly-Arms didn't seem at all nervous about the hill. The thing about boys is they're really good about doing things without thinking about them. The thing about girls is that they change their minds way too often. Which is exactly what I did, halfway into the 50 degree slope on the first turn. As I tried to dig a hole in the floorboard with the brake peddle, and engaged the emergency brake, I could almost see Tingly Arms giggling out of the corner of my terror filled eye. The jeep was sliding backwards, diagonally, between two not-friendly looking edges of the road, which were even steeper. I had the underwear and bra conversation with myself as I hung suspended, looking out my driver's side window, towards Certain Death. I was completely convinced that we were hanging sideways with one axle hooked on a big rock, and there was no way down but rolling. Which, based on the accident last week on these roads where a water tender rolled and killed the 19 year old driver, seemed like a terrible idea. Tingly Arms had a mischievous grin, and told me I should "just gun it" which I snapped back would be really easy to do if I could stop sliding. His smug 18-year-oldness, combined with my underwear epiphany, and the fact that I had basically NO other choice, compelled me to follow his instructions. I'm fairly certain that I closed my eyes, and somehow made it up on the second attempt at "gunning it". The next corner wasn't much better, but at that point I had decided if I was going to die, my body should be lost in an unrecoverable ravine. I ALMOST changed my mind again halfway through, but the beautiful thing about being a girl is that I can change my mind about changing my mind, and after a glimpse of a waver on the gas pedal, I held my breath and chewed up the corner. Tingly Arms giggled and made some comment about how fun that was, and I tried not to paralyze him with my eyes.

By the time I got to the murky pond and the animal Gary, I couldn't stand. Turns out that a pucker of that magnitude engages and tortions core muscles that I would rather not even acknowledge were there, let alone use at that intensity. I skidded back down the mountain without dying, miraculously, and managed to put off throwing up my Olive Garden leftover lunch until I was out of sight of all of the firefighters, who didn't seem the least bit impressed that I had just accomplished a Feat of Unnatural Courage. By the time I got back to camp, I was only mildly nauseous, my full on shakes were reduced to a slight buzz and the adrenaline overload was demanding a nap. And a pain killer. I said a few choice curse words instead of having a little cry, and made a beeline for my tent, where I immediately straightened my bra out.
at 12 August No comments: