It has occurred to me, as I have moved back into neighborliness proximity of my younger sister, and we are now somewhat more "grown up" than we were when I lived here four or five years ago, that everyone defines adulthood by a different set of parameters. As I examine the standard by which my sister and I measure "being grown up", I begin to realize that these icons of age for us really have nothing to do with that, at all. I started to notice it in earnest when Em and I were canning peaches the other day. She donned one of her many adorable vintage aprons, very similar to the dozens that my mom owned when I was growing up, and offered me one as well. I have one apron in my house. My mom made it for me from a vintage pattern, and it's apparently Christmas themed, which I somehow didn't pick up on until my baby sister Susanna pointed it out once. When one has only one apron, one cannot be picky about seasonal indications. As I put on Em's extra-cute apron, I felt an immediate sense of arrival. Arrival into adulthood, like my mom. I used the crap out of that apron, wiping my hands and pretty much everything else that might have needed wiping on it. I couldn't help noticing, during the 6 hour canning ordeal that resulted in 20 some quarts of peaches, how enslaved (in a good way) Em and I both are by the traditions instilled in us growing up. I have canned with several other ladies over the years, and adopted, or at least put up with, other methods of food processing that they have introduced to me. But as I canned with my sister, there was an unquestionable method-flow of procedure that was rooted in a linoleum floored farm house kitchen outside of Colville, more than 20 years ago. Em commented on how nice it was that she didn't have to tell me what to do next. Or vise-verse. This is how it's done. I know that so-and-so doesn't boil the lids, and somebody else heats the jars in the oven first, and lots of people cut their peaches in quarters instead of 12ths, but Stecker girls do it THIS way. Because we are grown ups. With aprons.

After we got done with that, I went home and got on eBay to find myself some vintage aprons - clearly the missing element in my lonely canning experiences in my own kitchen. Em stopped by and asked me if I had felt convicted when I was wearing her apron. Convicted about how good it felt, and like maybe I had put it off a little too long. I said yes. Just yes. And I ordered some aprons. We went and visited Sister's Second Hand, which is the only one in Northport, and a garbage dump turned treasure trove that we like to loot and pillage periodically. I only find good stuff when I am there with Em, because we are racing to find the best vintage junk before the other sister does. Someday maybe we'll own our own Sister's Second Hand, and spend our time scouring the universe for cool stuff to sell other competitive find-hunter sisters. Sometimes we find something at the same time and have to try to be adult about who's house it will go better in. Or we just make up something ridiculous about seeing it first and don't care. Probably if I did that I would feel guilty and give it to Em for her birthday or something. But not if I found it first fair and square.

Being a grown up means cooking from scratch, and washing the dishes more than once a day. And vacuuming regularly. It means bargain shopping, coupon clipping and Extreme Thriftiness. And maybe even stockpiling. Josh has always accused me of stockpiling, which is absurd, since I don't have lentils OR millet, both crucial elements of stockpiling, and since I ran out of toilet paper completely today and had to ride my bike to the neighbors to borrow a roll. I can only imagine how cool I looked with a fluffy white roll of Kirkland Select TP in my bicycle basket, coming home. If I was a true stockpiler, THAT never would have happened. And I would have a legitimate use for several plastic Five Gallon Buckets of Things. Now that we live in the boondocks, I can buy GINORMOUS bags of sugar and flour and thousands of Ziploc bags at a time and tell Josh that he just doesn't get Country Living yet. Or adulthood. I feel like if I was more of an adult, I wouldn't feel so giddy when I finish a batch of jam. I probably wouldn't need to leave it sitting on the counter for a week, jars shining in the sunlight as if they are waiting for blue ribbons at the fair. I wouldn't expect everyone that walks in my front door to ooh and ahh over the pretty oranges and yellows and reds. If I was more of a grown up. I wore my Christmas Apron when I made peach jam yesterday. I was hoping nobody would stop by to catch me in my off-season attire, which they didn't, while hoping they would stop by to see the lovely jars, which they also didn't, but I am certain the apron is the whole reason that this batch of jam turned out thicker and better than the other ones. I also switched pectin, but that seems like a silly reason. Maybe I am not such an adult after all. 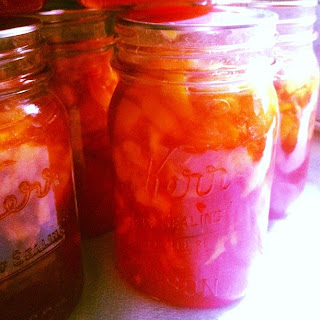 at 08 September No comments: