Things That I Make

So I have a confession: I love almost any recipe that calls for cream-of-something-soup. I am a sucker for tatertot casserole with green beans and hamburger and cream of mushroom gravy-like goodness. And the chicken enchiladas that my mother in law taught me to make that don't really resemble enchiladas in any capacity other than they have cheese and tortillas in them are one of our family favorites. In fact, they are Aspen's absolute favorite. She can't ever remember what they are called, but she loves them more than anything. And will ask for thirds, even when they are laced with extra roasted green chilis and are spicy enough to chap your lips, as Nattie pointed out. They were good. But I cheated this time, and in a rare switch-up, I assumed LESS guilt cheating than not cheating would have earned me. Someone had used up my entire "stockpile" of cream-of-something-soups, and in order to make enchiladas, I either had to resort to the traditional red sauce recipe that my Mexican friend who is whiter than any pasty sorority chick I have ever heard of gave me, run to the store for the sodium, chemical laden guilt trip of cream-of-something-soup, or improvise. I opted for plan C, and found a recipe for a substitute on Buns In My Oven. The title of this blog was slightly unsettling to me, but I found the recipe useful and most importantly: IT WORKED. The enchiladas didn't even taste like rip-off non-mexican enchiladas. Between the frozen-but-freshly-roasted green chilis and the homemade cream of chicken soup, they were not only yummy, but remarkably less unhealthy than usual (please note I do not make the leap to HEALTHY in this statement). 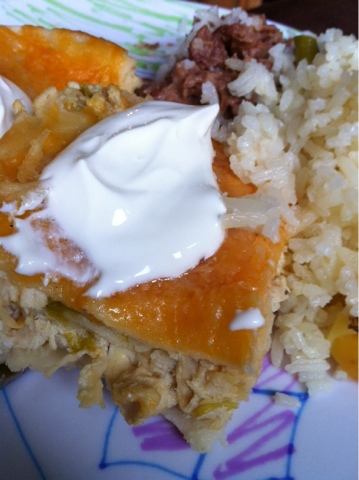 1 lb boiled shredded chicken, canned chicken, or just whatever chicken doesn't have bones and is already cooked.
1 can cream-of-something soup or make THIS substitute
1 cup sour cream
1 can diced green chilis (or if you're cool like me and visited the Price's chili farm, four or five roasted, diced chilis)
18 corn tortillas

Put down a layer of six overlapping tortillas in pan, spread one half of the chicken mixture on top, cover with cheese, then another layer of tortillas, the other half of the chicken goop, more cheese, then more tortillas and more cheese. Cover with tinfoil and bake for about an hour or until it's all melty and bubbly and delicious. Serve with salsa and MORE sour cream, because there's never enough.

This makes one pan. I almost always have to make two, and the amount are sort of best guess, because I am kind of a dumper rather than a measurer.

Yield: Equivalent to one can of soup

Melt the butter in a small sauce pan over medium-low heat. When melted, whisk in the flour and continue whisking until smooth and bubbly. Remove from the heat and slowly whisk in the chicken broth and milk. Return to the heat and bring to a gentle boil, whisking constantly, until the soup thickens. Add salt and pepper to taste.
Read more at http://www.bunsinmyoven.com/2011/05/04/cream-of-chicken-soup-substitute/#r78RiCcm5G3yTCWS.99
at 26 September No comments:

Things That Got Done

I did it. I survived my first day of real work. I even had fun. I was on time. I curled my hair. It didn't look like it, but I did. I learned lots of new stuff about the French revolution and skills required for being a shelf stocker. I played a lot of Go Fish. I went shopping for real food with fake money. And then I came home and I canned 6 quarts of applesauce, made chicken enchiladas for dinner with some friends, and fresh apple crisp, and I kept right on going until This Very Minute. Josh is still going, finishing up the half-cleaned kitchen after he spent the whole day working on the house. I did a load of dishes and put most of the food away, and then I quit.

Truck is busily hairing every surface that I vacuumed as soon as I got home from work, and Dagny is recovering emotionally from the abandonment she endured when her new ball-throwing friend Brian left her to go home with his family. I have something on my toe that hurts, which some people have told me may be a corn, but that makes me feel old, so I am just calling it a broken toe joint.

Josh drywalled the west half of the living room today, and cut out the doorway under the stairs for my new pantry, and stuff. It looks much bigger and brighter in here. I am getting more and more excited to see the end result of this remodel - excitement which I must place carefully to avoid making Josh feel like I am pressuring him discontentedly or I am ungrateful for the good, fast work he is doing. I don't want him to think that he should be working any faster - Lord knows I have only finished emptying about 1/5th of the wine bottles I need for my new chandelier. You just can't rush quality work. Like that book I am always still working on.

I am tired. In a good, productive, I did something with my day, way. I made applesauce AND money. Maybe not much, but some, of each. I am really happy to go to bed tonight with a sore back and a sore broken toe joint and a chili-pepper burn underneath one fingernail. I will dream about all of the things I will do tomorrow, and the next day. Including taking Aspen for a make-up Irish dance lesson, and probably supervising Josh in some interior design work this weekend, and maybe adopting a kitten. But you guys, I got a job. And there isn't a centimeter of wood paneling showing in my living room anymore. BAM!

at 26 September No comments: