Things That I Learn

When Josh and I got married, one of his best, oldest friends, a girl I like a lot, said to me "Hey. Everybody's got baggage. The important thing is whether or not your baggage matches." It resonated with me, and kind of stuck with me for almost three years - in fact, I even made a meme about it and put it in a blog about Things That I Have Decided.  But then I started to feel like maybe our baggage wasn't matching anymore - and that maybe baggage evolves, or we change it out periodically for more fashionable baggage. Either way, the resonation that made it seem like getting married to someone with as much glorious retro baggage as I had was a good idea, no longer resounded. And then today, a friend of mine sent me a different meme on Facebook that I thought for a second was the same sentiment but it finished differently. More like this: 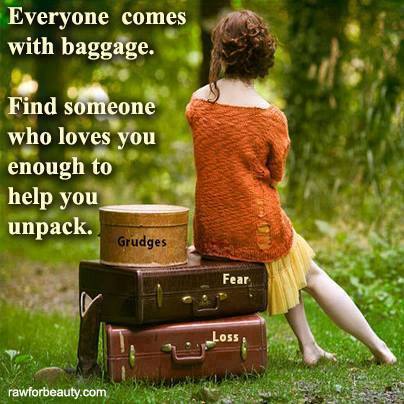 In an instant, when I was riding in the back of a rental car on my way from a fire camp in Entiat to Wenatchee to get more rental cars and cookies from the Best Aunt Ever, I had a complete paradigm shift. It isn't about matching our baggage. It's about unloading it. Unpacking. Settling in. Coming home to stay and not holding on to the temporariness of lugging around, well, vintage luggage. Because no matter how whimsical and quirky it looks, that crap gets heavy.

So I sat there and I stewed. Almost literally since it was like 137º outside and the guy up front seemed to have difficulty running the AC with pictures on the buttons, but mostly I stewed theoretically about how successful (or not) I have been in helping Josh unpack his baggage, or him mine. Or has that even been our goal? Maybe we have been comparing baggage so much to make SURE it matches that it has turned into a competition instead. Who has the worse sob story. The most drama. The biggest justification to be a poop head. Unfortunately, on all of those fronts, we both win. But instead of unpacking that junk and airing it out and folding it up and filing it where it can be useful, we drag it around and beat each other over the head with it like a couple of dumb apes. Or the three stooges. But only two of us. Dude. WE'RE DOING IT WRONG.

The problem is, unpacking it takes some things that we are both a little short on. Maybe because that damn baggage has been so heavy for so long. We're low on things like patience, because we're all on edge and crabby from sore shoulders and backs. And humility, because look how buff we are with our big old steamer trunks of bad luck. And empathy, because nobody took our baggage for us - so grab yer own bootstraps and suck it up! And gentleness, because we're just gol-darn tired. How do you help somebody unpack their baggage when your hands are jam packed with your own? How do you learn to set aside all of your aches and pains and help to take off all of someone else's? It takes a lot more strength to do that then to just cling to your own baggage and trudge along bitterly. For a minute there, you might be stuck balancing ALL OF THE BAGGAGE, while he catches his breath and realizes that he'll be ok without it. And that is terrifying. Because we all know that I am buff - but that buff?????

All I know is that is was a good day for Aunt Lynn to make 37 dozen cookies for me to bring to fire camp. Because cookies make most things better, especially Mulling Over Large Thoughts,  And snickerdoodles fix EVERYTHING. And with all of this baggage flying around -  and I know Aunt Lynn and some of my very special cousins can relate to some of this, but with all of this flying baggage, there's nothing more important than family. The kind you are born into and that love you unconditionally and inconsistently, and the kind you chose and sometimes almost wish you hadn't. There is no way to balance the load of ALL OF THE BAGGAGE if you don't have those people saying "sure you can. YOU'RE BUFF. it's only for a second. it will be worth it." There is no way to find the humility and patience and empathy and trust and hope to start unpacking. Without the life preserver of Somebody Who Loves you. No Matter What. All of The Time. For this I am eternally thankful. Because of this I am mostly hopeful. And with this I believe that I can suck it in and take on a few extra bags of STUFF, so that we can move in and be home. And all those outdated suitcases and trunks become nothing more than nostalgic decoration to remind us of where we have been and who we are.