Things About My Name

Today I finished the process of having my name legally changed back to Stecker. If feels full circle and final to me. Like this is where I started, and where I will end. But not in a bad way. I like being a Stecker. It carries with it connotations of weird cerebral coolness. And eccentric pack-ratish tendencies that usually result in having a lot of cool stuff for really cheap.

The process in getting back to Stecker wasn't too hard. But man, today was like an exercise in learning tolerance for the Whole Human Race. And that part was hard. I had to sit through the last part of traffic court, which was the contested cases, where a couple of very illiterate and mostly unintelligent people decided to go up against whichever law enforcement officer wrote them up for whatever infraction they were adamant that they didn't commit. It was actually pretty darn funny.

One guy was insistent that even though every witness of the accident that he caused saw him cross the center line, none of them could prove that they weren't lying, and therefore the person causing the wreck remained a mystery. He called his father, his brother and his buddy from down the road to testify on his behalf, because they all heard the officer on scene say that he "probably wouldn't" get a ticket. The high point for me was when the dad, in a raspy-smoke-thickened voice, asked if he should go "over yonder" to the witness stand, and then proceeded to tell the judge about all that he "seen" when he got there. The grammar nazi inside of me was gasping for air. The entire time. Then the brother said the exact same thing, except slipped up and conceded the officer's "probably" to the court. Then the buddy got up and chanted a similar mantra around a thick plug of chew and several rotten teeth, with grammar that put the entire defendant family to shame. It was impressive, and needless to say, they lost and were forced to pay the entire $124 ticket.

But THEN.... This other guy with a dirty gray ponytail got up and asked for a continuance of his ticket, which happened to be the third continuance, and therefore denied by the judge. According to the ticketing officer, this rocket scientist had passed on the shoulder  to the right of a car, and told the cop that he "don't like following slow cars, and I probably do lots of things people think are wrong." Yes. Those words. He proceeded to ask the judge is she could prove that there was a shoulder on this particular piece of  "real estate" and how she could make a judgement call without knowing for sure, and that he really felt sick and needed a continuance. Again. Another loss, he took it with his chin up and muttering disdainful things about the judge and cops and conspiracies about road shoulders, etc, and went off to pay his $124.

It makes me feel foolish for paying my speeding ticket without a fight. I mean, at least I could sound smart. The judge would probably let me off out of pure relief.

Then I went to Walmart. Because God hates me. I still haven't recovered.

And as if that wasn't bad enough, I decided to swing by Goodwill to make sure I wasn't missing and Christmas Candles on Military Monday that Em would beat me to later. After eavesdropping on a revelational conversation about the vicious nature of hippopotamuses between two meth-heads at the counter who were buying a resin hippopotamus statue, I left in a state of intellectual numbness that I haven't quite recovered from.

I went from there to do a few interviews for my next couple of articles, and until after I sat down and looked at a pile of amazing pictures from the early 20th century and newspaper clippings about the Ladies of the Grand Army of the Republic, I wasn't able to shake the hopelessness I felt for our species. But here was this little old lady named Edie, pointing out her battle-axe of a grandmother in pictures where she paraded with other patriots and political activists of the time. She told me the story of being apart from her biological father and grandmother until she was 19, and then meeting the woman who was the past president of the Ladies of The GAR, a somewhat celebrated school teacher in the northwest, and an all around mover and shaker. She explained how her bitterness toward her absent father had stolen the chance she would have had to be a part of this great lady's life. She spoke of forgiveness and the wonder of family and opportunities and always being soft.

And when I left, she slipped a puzzle piece into my hand, and reminded me that we all have a place in God's puzzle of life... and that even when we are "so low that we can sit on a dime and swing our legs", that we are loved, and we have a place. And suddenly, being human didn't seem so bad anymore, thanks to Edie.

And I remembered that I am, once again, a Stecker. Fitting into my spot. And while I am thankful for all of the days that I have spent as something else, and everything that I have learned along the way, it's good to just be me again, the way I started. My own puzzle piece. 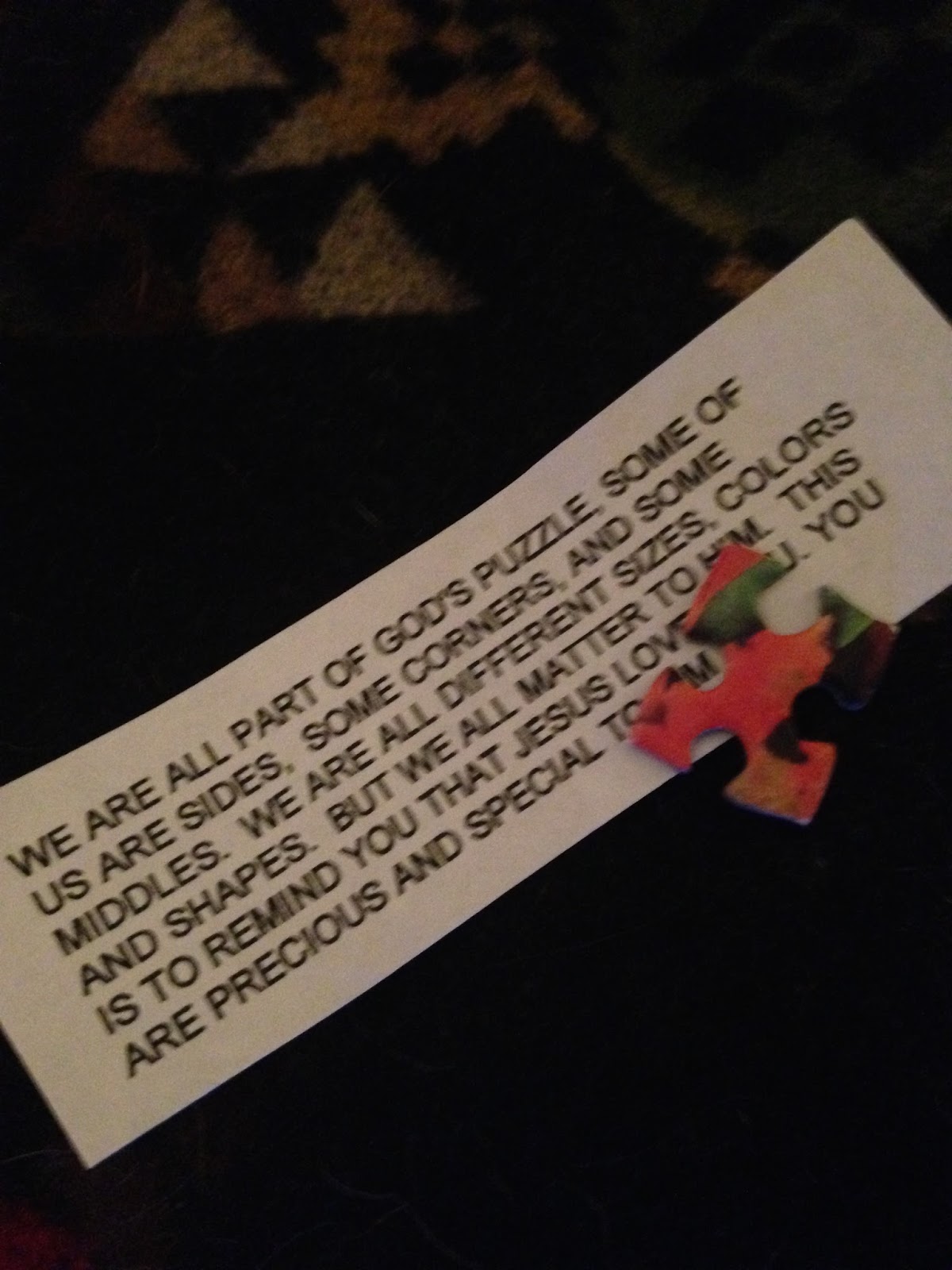 at 08 December No comments: