Once upon a time a girl who really couldn't afford it but had all this faith in The Good Things To Come, traveled to a far away land for a class about things she thought she might be good at. So much speculation in that sentence. Story of my life. It's really all about speculation. Wondering if THIS STEP is the Best Good Decision she has ever made or the Worst Mistake of Her Life. Ever unpredictable, the coin lands as it will, with the dashing prince that turns out to be a dud and the lost cause that becomes a best friend. But as the snowboard full of beer sits before me, and with the full knowledge that I will be able to pay at least for this One Last Supper, all is well.

This week I am in Wenatchee. I am learning how to be a Public Information Officer for all-hazard incidents for the federal government, which is to say they are teaching me how to avoid saying anything of traceable importance or litigatable fact to the surging media that appears on any major fire, flood, earthquake, terrorist attack or Black Friday sale. So far the only definite thing that I have learned is that when I am shot on video for an interview, I look exactly like my dad in a really bad wig (no offense dad, but it's a good thing you aren't a woman) #notphotogenic. It's a good thing I am really good at Twitter, and Facebook, and Writing All The Things. 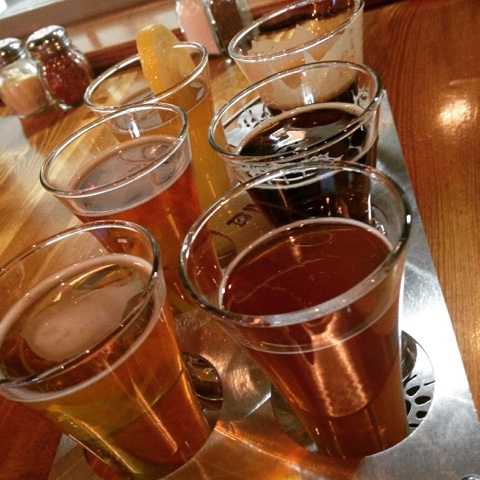 Being in the town of Wenatchee, which is not only geographically, but culturally dead center between Bend, Oregon and Kettle Falls, Washington, I am forced to do what any self respecting single-woman/beer-loving/unpaid-employee would: seek out the breweries and conduct an experiment in awkward drink-alone situations and creative bar-tab justification. It's working, y'all. I am winning. Not only have I succesfully ruled out the chance that I will EVER appear before a video camera again, I have determined that for the dedicated beer drinker, the only true micro-brewery in Wenatchee is Badger Mountain Brewing. While Badger Mountain doesn't offer a full menu, in the Happy-Hour I spent there with 6 of their noteably good beers, the brewer/cook came out and chatted with me, because he's cool. Well worth the visit. Don't even waste your time at Columbia Valley Brewing since apparently their brewing apparatus broke down months ago and they forgot to tell anybody. Their food also leaves something to be desired, namely flavor, and the place smelled like Pine Sol, which is totally cool if you're in a nursing home. Saddle Rock Brewing, on the other hand, while making the most mouth watering calzone I have ever experienced (it is a full-on experience), offers only one SRB beer on tap, calling into question their viability as a "brewery". Let's go with "Awesome taphouse with a brewing hobby" instead. That's better. To be fair, the one beer is decidely good, even for an IPA, which most of you know is not my favorite. But the WVC (Wenatchee Valley College) 4.0 IPA is an easy, not-too-hoppy drinker, so most IPA die-hards will be dismayed. Upon further "research" involving a 12 beer sample flight and a burly, tattooed, red-headed waiter, it appears that SRB releases one brew a month in addition to their 11 guest beers. Turns out their 45 gallon brewing system is truly a platform for brewing experimentation. Potential for better days (and brews) ahead. I don't hate it, especially when the guest taps are from Ninkasi, Deschutes (including Not The Stoic?!?!?) and 21st Amendment, a brewery I had been itching to try. 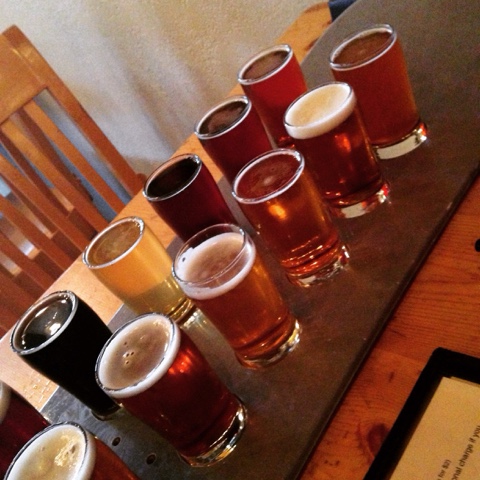 So even if I don't make a very good camera-ready PIO, I know that I can Tweet the rest of them to shame, and if all else fails: BEER.