Things That Make You Stop

I had an awesome weekend. I learned so much, met some great people, and slept in a top bunk, which is therapeutic in the same way as those weird shrinks who make you squeeze your way out of a fabric tube to re-experience birth. If you haven't heard of that then you aren't watching enough Law and Order SVU. I came home knowing that I would have a lot to catch up on. I mean, I have been gone for the last 23 out of 30 days, so if you were beginning to wonder where I live anymore, me too. It's almost the end of May now and my yard hasn't been mowed since April. Of last year. Ok that's a slight exaggeration, but it does look a lot like no one has lived at my house for four years. The good news about me ignoring my yard is that I haven't had a chance to kill the surviving raspberry plants that are back there defying the odds of existing in Liv's world.

I have had work to go to since I got back, which is great because no matter how much laundry I do, or dishes, or how many times I mop the floors, nobody will pay me for it and the Bill People don't like that. The downside of working when I am home and then leaving is that All Of the Other Things don't get done. Yesterday, before hitting it hard on a mission from hell to Do It All, I took a night off with the kids and we went to see Avengers: Age of Ultron. It was awesome.

So I came home from work today all psyched up to get shit done. Like, f'reals. This was after a long day of data entry, directing a bunch of eye-rolling sophomores in the school production of Mean Girls, and having my 17 year old daughter tell me flat out, NO, that she would not come home with me on the school campus in front of God and Everyone, then ride off into the sunset on a bicycle with her boyfriend. In my heart, I grabbed her by the hair and drug her down the sidewalk, but luckily my shoulder wouldn't have endured it, and I probably would have ended up in my best friend's cop car, parked conveniently 10 feet away from the altercation. Turns out that in spite of the fact that she is FAILING two classes that she must pass to graduate in three weeks, her dad told her she can run wild and free all over town with her boyfriend. Effective parenting right there, folks. Also: PUBLIC SHAMING.

Anyway, Aspen cranked up an odd mix of Frank Sinatra, Fun., Justin Timberlake and Pink and we started cleaning out the camp trailer that has been inhabited only by a colony of ants, a family of small spiders, and MacKenzie and her boyfriend over the last few months. When even got in on the spider killing action, and then we moved on to the back porch which has been doubling as a garbage dump/where we put all the crap we have no idea what to do with it, and let the spiders take over. We swept and stacked and tossed and hosed and got that junk wrangled. Then I cleaned the bathroom, organized the laundry room, washed ALL of the rugs from the floors, the shower curtains, and nearly every towel we own.

I was washing the trays from two food dehydrators that we discovered under a pile of cardboard on the back porch when it happened. I was bent over the sink a little and all of a sudden I couldn't breathe. Or move. Or anything. There was something that I can only compare to The Hammer Of Thor pounding into this spot in my spine and I was rendered completely useless. After a few minutes of dry heaving in the sink from the pain and planning my funeral, I managed to slowly twist down onto the floor, where I belly crawled out of the kitchen. I learned two things in this moment: my core strength could really use some work, and the floors need to be mopped badly.

I tried crawling onto the inversion table to "stretch it out" which ended with Aspen helping me get back on to the floor. Then I got on my feet in a very graceful knees-to-couch rolling twist up again and figured out if I stay perfectly straight upright I could finish making dinner. I did a stint on the foam roller which my kids watched in amusement, and Dagny thought was strictly so I would have a better ball throwing angle for her. Now I am in bed on an icepack with a bottle of wine.

I asked my sister if spines can bleed, because I am pretty sure mine is. She said no, unless someone stabbed you in the back, which we could, within rights, pin on MacKenzie today, especially considering I had just written a $50 check to cover her cap and gown and year book. I wonder if I can cancel that check?

I am curious to see how work goes tomorrow, and if they will send a wheelchair to pick me up because I can't feel one of my legs... 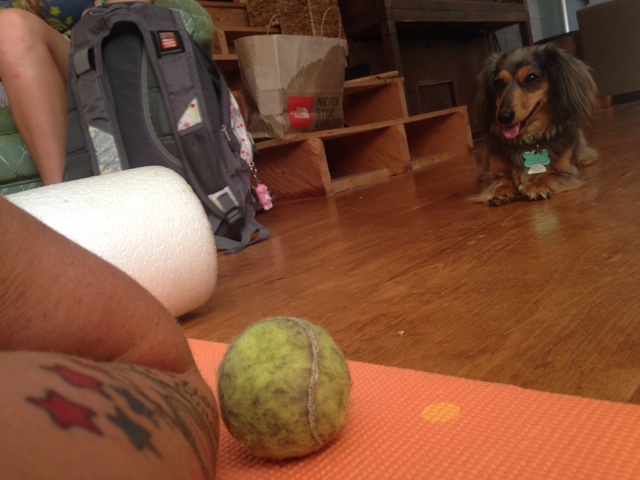