Things About Being American in not-America


There are a few basic rules to international traveling. I am fairly certain that I don’t know any of them, but it was quickly evident to me that in addition to the real rules, like passports and visas and not being felons on the run or carrying any highly contagious diseases, there are a number of unspoken cultural things-to-avoid when outside of one’s own country. Most of these can basically be summed up into one: don’t be a jerk.

If you are going to travel to countries that are not the United States, it is important to remember several things, including the fact that you are traveling to countries that ARE NOT THE UNITED STATES. Sometimes, in these other countries, they do things differently. Like even speaking English. Turns out, this widely spoken language is actually spoken quite differently from place to place, which is interesting to discover when you, say, refer to that quintessential travelling necessity that us “Americans” call a fanny-pack, in a country like Australia and have succeeded in offended the young women in front of you by a careless mention of their genitalia.

Recently, being a world traveler, I was in Dublin with my family, and my parents were not particularly amused when my cousin and I kept referring to the “crack” that locals were telling us we could find downtown. The more enlightened among us readily understood that “crack” is an Irish term based on the Gaelic word  “craic”, which means simply “a good time”, and was most likely stolen and perverted by American druggies in the roaring twenties. Once this miscommunication was ironed out we were all relieved that even mom and dad could join us for a bit o’ crack in the pubs of Ireland.


Another keen traveling tip for Americans Abroad is the vital importance of matching luggage. This is the ONLY way to ensure adventures such as mixing up the bags of 6’1”, 190 lb. Uncle Jim and 4’9” 92 lb. Aunt Janet when we split off to fly to separate countries for more exploring. Not that Aunt Janet wouldn’t have killed it in green gym shorts and a bicycling cap, but I am not sure the Netherlands would have recovered from Uncle Jim in a size 00 zip off quick dry skirt  – this could easily be misconstrued as some sort of cultural terrorism. Matching suitcases also offers the reassurance that EVERYONE will know that we are related, even English speaking people who don’t really speak English. I saw several American families following this important travel protocol, and was somewhat envious of their Disney Themed carry-ons. Next time, family. Next time.

Dietary differences are an important factor to consider when traveling as well. One of our family members has celiac disease, which proved problematic, especially when we were on “the continent”, where A) they didn’t even pretend to speak English and B) continental breakfast is actually a THING. As is continental lunch, and dinner. The four major food groups in France are bread, croissants, rolls and cheese. Lucky for Aunt J, we already knew the word for cheese was “fromage”, which offered a relatively safe source of protein for her. Also, it turns out, hot dog is a nearly universal term. Shortly into our trip, after a text-a-friend to the most recent high-school French student, we were able to eek out the French word blé – which I think is wheat, because once we said that (actually showed them in text, because pronouncing blé is much harder than one would imagine), they smiled and said, in a very frenchy accent: “AHHH! Oui! Glúten Free!” which happens to be exactly what we were saying the whole time, but in American. Lord Love a Duck. 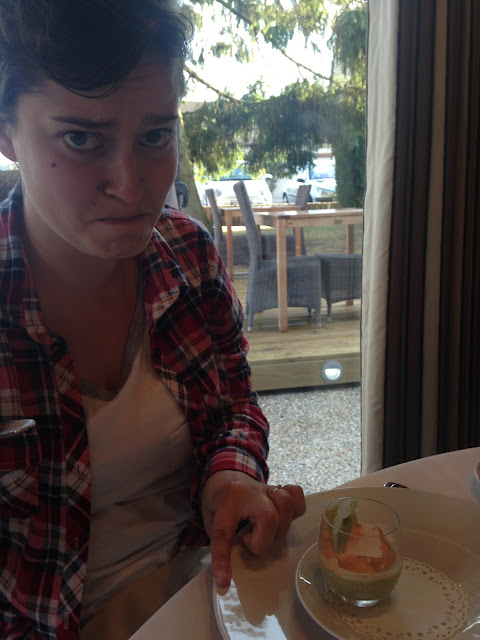 Sanna spilled her unidentifiable French green gelatinous appetizer. We do fancy, yo.

Now, in spite of hailing from Northport, I would consider myself a fairly well rounded, cultured and adaptable individual. We live in a multi-cultural world, and I like it that way. I am of the firm belief that both the Native Americans AND the Spanish were on this continent before us white European folks, so there’s absolutely no reason that Spanish or whatever language shouldn’t be spoken and taught here. We are as much of a melting pot as the world has to offer, and it turns out, after being in Ireland, England, Scotland and France, there’s a lot of melting all over the place. We had authentic Italian food with authentic Italian waiters in Edinburgh, we had German wait staff in Ireland, and we had Czechish service in London. And in every place we went, “English speaking” country or no, we seemed to run into communication barriers, which makes me feel a bit like the common denominator, and also the cliché American jerk. No matter how loudly or slowly I spoke, they still didn't understand me. #youredoingitwrong

Like the time that we ordered hamburger steak in France and had it delivered to our table pretty much raw. The polite European thing to do might have been eating hamburger tartaré, but… well, I sent mine back to the kitchen for a little bit of cooking, because: e-coli, you guys.

Also did you know that American Plumbing isn't the universal standard? For instance, I ran across a pit toilet in France, that I was happy to use in my urgent need. And some places don't have stand up showers. And some places have sitting showers for your nether regions (not to be confused with Nether-lands). Not to mention the variety of how-do-you-turn-it-on and how-do-you-get-hot-water dilemmas we faced in different locations. It's all quite complicated and confusing for the average 'Merican. I mean, it certainly wasn't a village in Uganda, or even a Chinese suburb, for that matter, but it was also not Colville.


Maybe it sounds shallow to say that I like the way we do things here in the good ol' USof A. Or maybe it just sounds like I am closed-minded and stuck in an American rut, which is ok. It's fun to experience things like accidentally peeing on your ankles, or eating raw hamburger every once in awhile, but for the most part, I'll take what we've got going on here. I just have to remember that when I DO venture out into the Big Wide World again, to take my travel etiquette and a couple of basic translation dictionaries with me. Just in case.