Things That Go Bump In The Night

Let's just say that you get up at 11:30 PM to go to the bathroom. Being the Only Human Being in the whole house, you find it odd that the bathroom door is closed. Odder still, the door opens Very Reluctantly, as if, on the other side, is a heinous secret that it is loathe to unveil. And then let's say that you get the door open and figure out that some Super Villain has pulled all of the towels off the shelf behind the door that you folded and placed there yesterday. You know, the towels that you were looking for when you took a shower after 10 days on a fire and you realized that Noone had been staying at the house and getting All Of The Towels dirty and hiding them somewhere. So the towels that you washed ALL of, folded and put them away, were unfolded and blocking the bathroom door from the inside. But being the Only Human Being In The House, this is kind of weird. Because if say, any one of my 6+ daughters were around, that's totally normal, but just me... generally if I am unfolding towels it's to make a towel fort under the table and I just haven't had the energy.

Anyway, you fold up the towels again, and think it odd, but since it's 11:30 and you have been asleep for an hour, it doesn't seem worth freaking out about, or even solving. But then you see this: 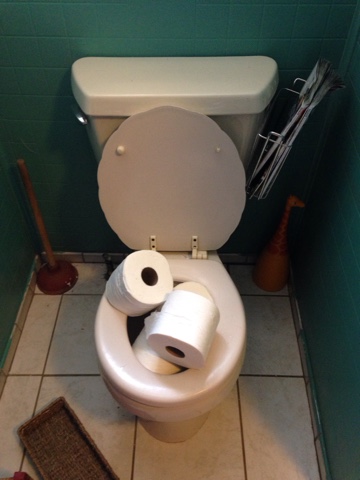 And you think: What in the actual bloody heck?

And as you remove them, roll by roll, all five of them, you wonder what maniacal two-year-old snuck into my house in the middle of the night and threw All of The Toilet Paper into the bowl? And then you turn to throw the water logged rolls into the bathtub, because at this point, nothing else really made sense, and you see them.

Languishing like two ingenious Jagulars on the bath mat. Smugly proud of the strong work they had performed. These two delinquent brother a**hats who have knocked every picture frame on my wall sideways, chased a thousand headbands under the couch. These two reprobate felines who think that sneak attacks on sleeping heads of hair at three AM are almost as much fun as plastic bag wars at four AM. These arrogant poopheads that guard the dog door to attack unsuspecting dogs going in and out. THESE CATS. Seriously. 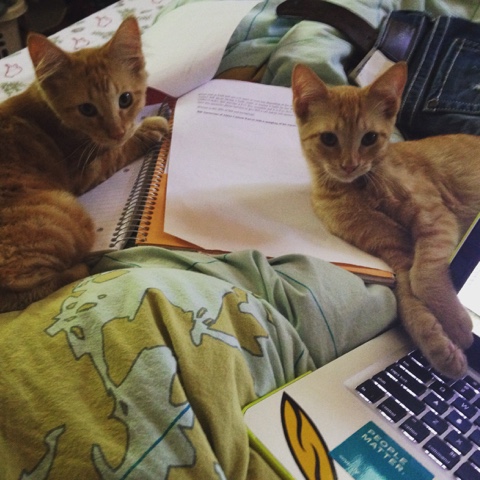