The best part about working on a fire is when the smell of crackle-burning wood settles into camp and permeates all of the clothes that you've packed, and your whole bedroll smells like a woodstove. It's an inescapable aroma, and while we always joke that it smells like money, to me it smells more like fierce power and unharnessed freedom.


We're pretty silly for thinking that we can fight fire... more like we just herd it a little and encourage it the direction that we hope it will go. If it was a real fight then no doubt we would lose. Like a tiny child swinging windmill fists at a raging giant. Maybe it's the mercy of the giant that sways it away from it's course of destruction, or maybe the little splashes of water we throw on the inferno are just enough to discourage it from it's rampage. Little splashes  in the form of thousands of gallons of pond-sludge, murky brown and smelling like the life that it left behind, fueled by millions of dollars of air-power and the best that the small child of humanity has to throw at it. 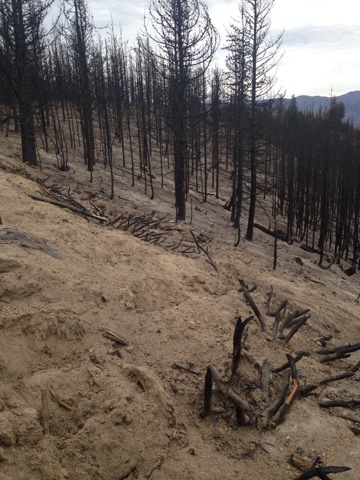 But hour after hour, day after day, the misshapen boots trudge up the hills and down the slopes, stumbling through rock screes and slipping on retardant dumps, ash and oil and pitch and soot-filled snot staining the pants in a few key shades of green. Road-line yellow shirts, blackened by smoke soaked sweat, conformed to the bent bodies and frayed pack straps clinging to the fire-soldiers like they were all one continuous piece of being. Mile after mile, winding trails, scrambling up cliff sides, digging in heels and toes and pulaskis and rhinos and leaving the tell-tale trace of salvation that will be gone with the next spring's growing green.


A chicken scratch line in the dirt tells the angry, impetuous beast of fire that He Shall Not Pass. Like an imaginary wall of nothing that the inferno cannot consume, with his will crushed but his appetite far from staved, he turns and moves on, and the troops with him, to meet him at the next pass and cut him off once more, tell him where he Cannot Go, and hope that he gives up so there's time to scratch underneath their sock and wolf down a bite of anything.


They sleep under stars that are swirled in clouds and smoke, curled up in the combined smell of themselves and the fire-beast, wearing the sweat and ashes that they have earned like the arms of a hard-won lover. If dreams come in the child-like sleep coma, they are wild and ferocious, like the animal that they have chased all day. Every thing that these fire-soldiers do is fierce. Their work is fierce, their sleep is fierce, their love is fierce and their hate is fierce. They stand in the face of a 30 foot wall of burning trees with a whoop and a laugh, knowing the thrill of taming the beast that most of us would be terrified to encounter. 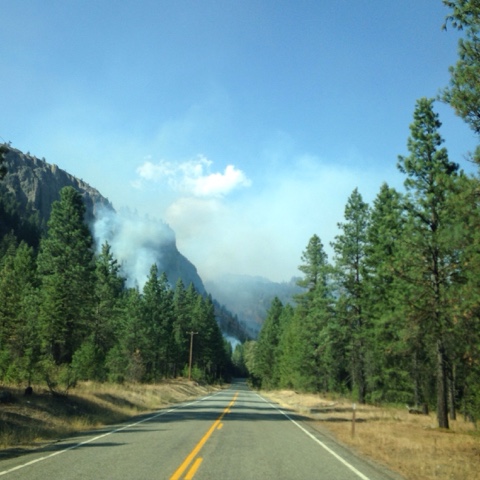 This Quixotic army fights the endless enemy that will continue devouring long after they are dead in their graves. The fire captivates and enthralls them, beckoning them to continue the dance through forests and towns and prairies and tundras, knowing well enough that the monster can't be killed, but might be contained with the right choreography. It is an eternal adventure, curtailed only by aging bodies and grown-up pressures of life. The stories of flame chasing live beyond the end of a shift or the hanging up of a saw. They are legend, like the men and women who live them.