Things About Being a Line "Medic"

Everybody knows that a good day for an EMT on the fireline involves being as bored as possible. At least 452 people a day ask me, as they drive by on their missions of various importance, if I am bored, only to hear me say "YES", so they can respond with a resounding, "Good! We like our medics bored" and cruise off into firefighting oblivion. The script is rote. It is a verbatim refrain we hear a thousand times in the summer, and yet somehow, for the rest of the firefighting world, it never gets old.

Today, in the midst of my "boredom", which for this summer has involved reading over a dozen books, writing thousands of words, watching a couple movies and pretty much solving all of the world's problems, I decided to get creative with my time and make myself a gourmet lunch. And by gourmet lunch of course I mean a can of Cream of Chicken soup in the JetBoil.

Now anybody versed in the use of a JetBoil understands the delicate balance of cooking soup. The contraption was not idly named, and while it will boil water in mere minutes, it will also boil, and overboil, any other substance in equally short order. Cooking soup in the JetBoil involves a talented feathering of the fuel feed to keep the heat at a gentle minimum, coaxing the soup patiently into a soft rolling boil without exploding it all down the sides of the pot, across the tailgate and underneath the cooler. I know this from personal experience. Constant supervision and frequent stirring are vital. It's like making caramel from scratch, but a little trickier.

The whole time I stood there stirring my soup, feathering the heat, smelling the delicious waves of aroma, I knew that I had invited disaster. Nobody needs a line EMT unless they are directly in the throes of cooking soup. It's just an unwritten rule. So I stirred with a sigh of resignation, knowing that the bliss of my wilderness gourmet was short lived.

Sure enough, just as the CofC hit a gentle boil, a random Task Force Leader Trainee wandered over to my rig casually and leaned up against it with a "hey girl..." look in his eye. Judging by the wedding ring and the fact that I had just witnessed him eating his entire 3 pound pastrami sandwhich, I knew he was there for neither romance nor soup.

"Wondering if you want to go for a cruise... alleviate your boredom..." he throws down, which, loosely translated, means "my trainer ditched me here with no car and I have to go tie in with a crew, would you give me a ride in your super-sweet, pimped out medic-mobile with the heated seats, so I don't have to walk a quarter mile down the road?"

"But my soup! The heat is perfectly feathered! The boil is gentle! The pot is 7000 degrees - can't you see the orange flame thingies glowing on the side?" Were all the things that I didn't say. Nope. Of course he was saving me from my boredom. Of course I would oblige him. Of course it was no big deal that even the distraction of him talking to me threatened an immediate explosion of tailgate soup. I quickly shut down the JetBoil and started grumbling internally.

In addition to balancing my scalding mug of soup precariously as we jolted down the road, I was forced to throw my 385 pound book bag into the back so the TFLD had a place to sit. Interestingly enough, I forgot about the fiesta sized bag of Juanitas that were sitting directly under where I tossed the bag until later, when I restored my precious book bag to it's rightful place beside me. And just as I am finally recovering from all of this, the ambulance that had been posted serenely down the at the bottom of the road decided to pay me a visit, which resulted in me elbowing my mug of soup into the passenger seat. All because line EMTs are bored.

My soup was cold when I finally ate what was left, but I added some crushed Juanitas and pretended it was Chicken Enchilada soup, without the cheese or green chiles. Making lemonade out of those lemons, folks. It's just how I roll.

As the ambulance guys chatted me up, and the soup swirled in the black leather seat next to me, they pointed out cheerfully that my medic-mobile was marked "paramedic" on the back window. Yes, I explained. I was an imposter. My rental Tahoe was a hand-me-down from a "real paramedic", and even though I tried to scrape the "para" off the windows, it was cemented on through a chemical reaction of extreme heat, time and a good layer of mud. So I explained to the ambulance guys that I was given a field promotion, for time in rank, and would now be operating at an ALS level, if I could just borrow their narcotics. Also, would they like some soup? 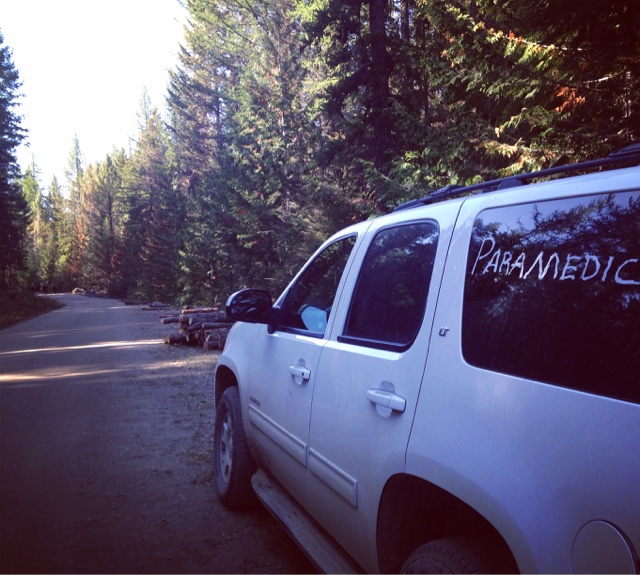 It's not like it should be that surprising. Out on the fireline, every EMT: paramedic, basic or whatever, is called a MEDIC. The lines are grossly blurred. This is compounded by three things: 1. the general wildland fire population has NO idea what the difference is, 2. tradition and 3. a lot of wanna be blowhards out here who pretend to be something much more than they actually are. There is an epidemic of underexperienced EMTs (and some paramedics) who have no other affiliation and no field time that have some how wrangled a red card and an assignment, and run around offering to save lives in the most dangerous capacity possible. This is an area where some of us are working hard to bring more accountability to, and also quite Qixotic. But far be it from me to not get in on the trend. Sure I am a paramedic - look! My truck says so! And also I am very, very bored. 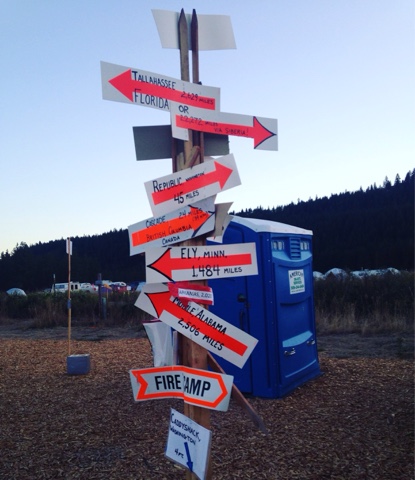