I have taken showers, or something that in some way resembled a shower, in places all over the world, literally. But nothing beats a fire shower, and here on the Kettle Complex, they've outdone themselves to make it a memorable experience.

In an exciting plot twist, the shower contractors here on the Kettle Complex operate a trailer with individual stalls, each with door opening to the outside world, kind of like a game show where you get to pick your shower experience. Will you take what's behind door number 5 - with a leaky shower head, a wad of hair in the drain and a questionable trail of incongruous slime down the west wall? Or will it be door number 3, with a dysfunctional lock on the handle that reveals a fully naked and VERY surprised firefighter inside? Maybe it's door number 9, which was cleaned recently but where you realize too late that it sits at the end of the hot water train, which apparently stopped for a breather back at door 7. It's luck of the draw in these phone booth sized boxes, just beckoning the frozen dirtbag in nomex to make the risk-laden decision. 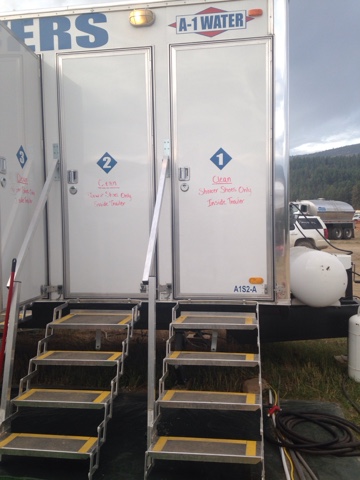 Once you've committed, and, thanks to the shivering soul behind door 3, remember to lock your stall VERY WELL before you begin the monumental task of taking of several layers of nomex, fleece and long johns in a space about half the size of a juvenile coffin. Thoughtfully, the contractor has provided a fold down bench seat that is made of solid lead and which crashes to a horizontal position with the force and severity of a giullitine. I am not sure how the bench helps, as a seating position on it wedges your knees up against the opposite wall, making the removal of socks or pants laughable. But it's nice to sit for a minute and plan a strategy before you call the contractor to help you push the 85 lb seat back up against the wall.

Of course you forgot shower shoes on this fire, a classic rookie move that you will never admit to, but you are secretly counting on the shower people to have a giant vat of miscellaneous flip flops that you can fish out and slip on before anyone notices. It's a good thing you aren't picky about them matching, because two mates floating in the bleach water is just too much to ask. You try not to imagine which fungus-infested toes were last wrapped around the rubber as you slide your feet in - thanking god for the millionth time that you are a girl and these pink flip flops have most likely been on slightly cleaner and slightly fewer feet - just the handful of girls in camp and a couple of the smaller Mexican contractors, I am sure.

After a brief shudder, you're ready to get clean. Or at least to rinse the top layer of grime off and maybe consider reducing your armpit hair to a braidable length for convenience. Shaving is a problem in and of itself in the later weeks of fire, since you'll usually end up shaving off more goosebumps than hair, and leaving a stinging rash of regret up and down your legs. A lot of girls give up shaving all together during fire season, but after I started having dreams that I was cuddling with bigfoot, I opted to resume the regime.

Late season fires pose the difficult dilemma of whether to take a shower in the night, and go to bed with wet hair in sub-freezing temperatures, or a morning shower, looking forward to ice-crystal hair and being first naked, and then wet and naked, in the aforementioned temperatures shortly after dawn. In the particular day in question, I had opted for a morning shower, not willing to repeat the two week head cold that I blamed on my last late season night bathing. #longhairdocare

The cattle-call shower trailers where 8 girls change in the same space like a junior high PE class at least offers the communal warmth of everybody's steamy output, but in these individual stalls, the cutting edge venting technology in the roof that creates continuous airflow out of each booth creates the atmosphere of an igloo in the colder months.

But the water is hot - piping hot - and you climb in and start to think about how to let the rest of your crew know that you won't be back out on the line for two or three days, give or take. After a miraculous half day, the guilt for abandoning your post starts to set in and then the real strategizing begins. How to leave the sultry, sauna-like cubicle behind the curtain and emerge into the ice block domain of the dressing cubby. Thankfully, you don't have to leave the shower experience completely behind you, as the condensation from 250 degree water has accumulated in a thick layer across the ceiling, and what hasn't frozen solid is dripping in a fairly steady ice-cold rain all. over. your. naked. body. At this point you give up on any kind of an orderly process for reacquiring the layers you shed earlier in the morning. It's an all out panicked frenzy to get any kind of clothing on your body, STAT. Later you will realize that your shirt (and probably underwear) are on inside-out and backwards, but you just don't care.

You graciously, in a mildly hypothermic state, try to rinse the trail of incongruous slime from the shower wall and collect your wad of hair, unlike the uncouth cad in stall number 5, and make a hasty retreat down the rattling metal steps to the dirt below, where you promtly begin to undo all of your hard work getting clean. But not until you've returned the pink flip flops to the swirling vat of chlorine and thanked the shower contractor people, who ask you how it was, and mention casually that you have a giant booger smeared across your face. It's helpful, since they didn't think to install mirrors in the phone booths. It might have prevented too many inside-out shirts, I guess. By the time you get the booger handled and your numb feet back into your patiently waiting boots, which you are equally surprised and relieved to see have not accumulated any snow or black widows in your absence, your hair is a frozen mass of rigid dred locks, which is exactly why they make hats.

Happy shower day on the fireline, folks - oh, and you missed a spot shaving. 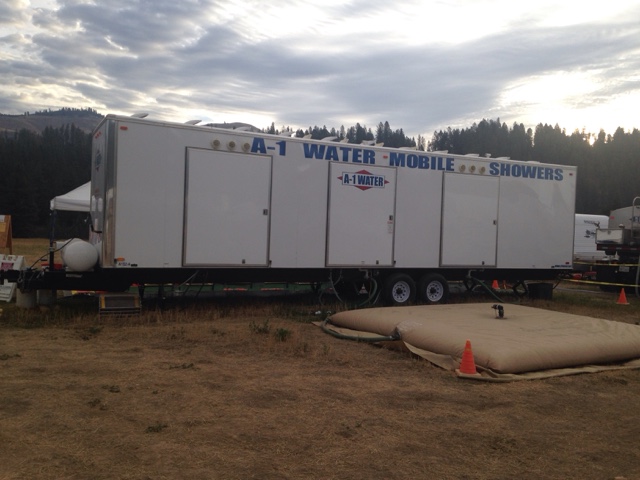