Things That Make Me Feel Swell

This morning started out like most mornings do for me. I had to get up, which in and of itself is altogether unpleasant, but even more so when my alarm goes off at 5:25 and I really SHOULD be in the medical tent by 5:30, but my hair hurts from not showering and I generally feel unpretty, unfriendly and not very likeable.

I got up anyway, and managed to squeeze a shower in before I drove out to the line (which I am sure everyone on my division was grateful for), and as the day progressed, things got better.

For one thing, I had really great hair today. This was due in part to the much anticipated shower, new shampoo and the fact that I had no mirrors anywhere near me all day long. But I could just tell that my hair was Killing It. And also it smelled like peppermint and sunshine smashed together in a smoothie of awesome.

Secondly, I noticed at some point when I was walking around the truck (since that is exactly as far as I walked all day) that my thighs weren't rubbing together. That's a pretty monumental thing in the world of Liv, and I was kind of excited. Even though I knew it had more to do with the super tight long johns I was wearing that compressed those troublesome thigh rolls that are a perpetual problem, I wanted to believe it was somehow related to the three times on this fire that I did four or five squats. In all fairness to myself, I did do fifty plie squats one day, because I was being haunted by the Swedish-Accented fitness guru going on and on about how great my butt would look in a video that my medic buddy Melissa subjected me to last year. It's quite silly since everyone knows that Swedes are to be trusted more for their Chefs than their fitness gurus.

Today I also finished two books that I was reading, one by James Dashner (Eye of Minds), who is a terrible writer but has great story lines (The Maze Runner...), and Anne Lamott (Bird by Bird) who is a flipping fabulous writer but I get a little lost on her content from time to time. It was a good balance and actually did more for me as a writer than it did as a reader, which is not usually a conscious perspective I have when binge reading on fires. Tomorrow I will read some Clive Cussler and see what that does for my writing skillz.

Additionally, I interviewed a real writer - one with published novels, over the phone while I was sitting on a literal mountain top overlooking Lake Chelan and a giant moonscaped forest. The interview was both interesting and inspiring, especially toward the end when we talked about forming a little beer-drinking writers group this fall for moral support and an idea echo-chamber. I am prettty stoked about that. Almost as much as I am about my great hair.

Another cool thing was during our AAR (After Action Review at the end of shift) when the Safety Officer from Australia taught all of us some of the tricks of Australian Football, which involves a weird volleyballesque hit from the hand with the opposite fist. I was casually staying out of the hitting circle, both because I am a grossly non-athletic old woman, and because I have a broken shoulder (circumferential tear of the labrum which allows for partial dislocation and some Holy Hell pain with almost any extension movement) and didn't want to use that like a typical girl excuse. But one of the damn boys hit it right into my arms anyway, and what's a girl to do? Anything other than admit weakness or a broken shoulder, right? So I hit it, badly. But only as badly as some of the less athletic fire guys. I am sure my accompanying facial expression as I felt the spasmed muscles around my scapula tearing asunder was something akin to Edvard Munch's Scream painting. All the way home I planned out how I would spend the entire night alternately crying and taking various types of drugs to make it stop. As of this moment, using my right arm is mostly out of the question, which is interesting, because typing with one left hand is mostly a Comedy of Errors. 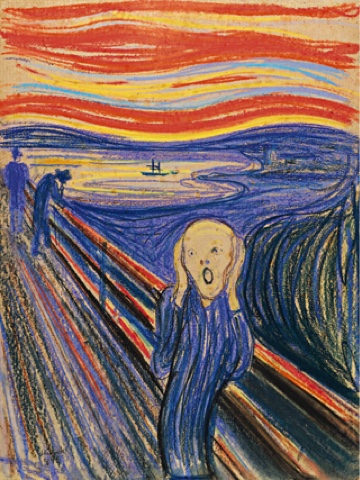 And then there was the older couple sitting in their golf cart at the top of their driveway over Lake Chelan as we came off the fireline, clapping and waving like a two person pep rally as our convoy of fire vehicles rolled by. The fact that I was following five pickups packed with studly bearded firefighters obviously helped with that, but I got a little choked up feeling like a vicarious hero, floating by on the shirttails of the real ones. 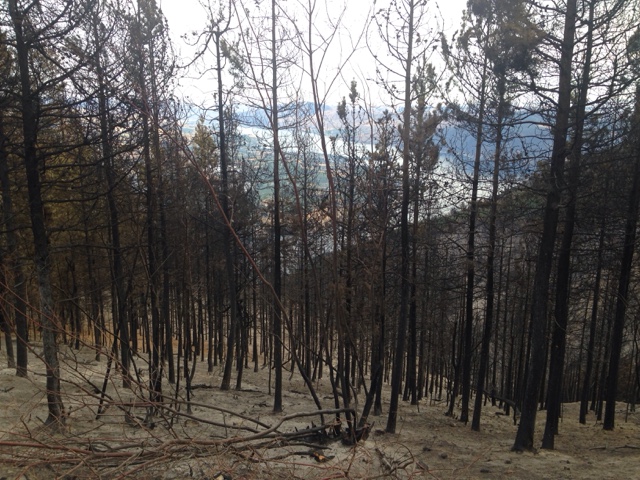