Things About Being Somebody Else

It's almost a lost cause. Seriously.

I have come to the long-elusive conclusion that self-esteem is probably a myth. As a child, I remember hearing about self-esteem and picturing it like some golden badge that one wears around and shows off. Like: "Look at my shining self image. I love myself!" I keep waiting for the badge to show up in the mail after I work out, or deprive myself of ice cream, or after some random dude says I am cute. But alas, no badge. And just the very second I start to feel that rosy rush of I-AM-PRETTY-COOL, I go and pull some stunt that sets me right back on my realistically normal rear end. Like, for instance, trying to dress up for Halloween.

I have always loved to dress up. Since I was a 15 10 year old playing house with my sister in the field in front of our house, I have jumped at any opportunity to be somebody other than plain old Liv. Theater was really nothing more for me than an excuse to play dress up...And then there is Halloween. For years, in a religious community, the opportunities for costume play were relegated to our cowboy skits and the thinly veiled "Harvest Festival" substitutions for Halloween, which I fought for year after year, just so I could be somebody other than me. After leaving the community, I immediately jumped back onto the Halloween bandwagon with my kids, forgetting momentarily that I was too old to be a socially acceptable trick-r-treater.

And then I discovered the adult costume party - you know, the one at the bar, where you dress like a fairy-tale-themed hooker and whoever has the best cleavage wins the $50 cash prize? Yeah. Never scored on that one. But year after year I have waited for the opportunity to play my heroes. Peter Pan, Rosie the Riveter, Annie Oakley, The Heartless Tin Woman - and I have to admit, some of the years have been less than successful, especially after I Do The Right Thing and take the kids trick-r-treating in the freezing rain and can't muster up enthusiasm for the rest of the partying.

But this year I was ready. I had my costume all worked up in advance, with of course, a few obstacles. I had shopped around for some invitations to some crazy fun parties and had my pick of places to go. It was happening.

I have been a Lara Croft fan for years. I mean, first of all she's a quasi-archaeologist who is a bada$$ with some big guns. Secondly, she's Angelina Jolie, or more correctly, Angelina Jolie is her. What isn't to idolize, right? Anyway, this was the year that I decided I was brave enough to rock the skin tight shorts and a thigh holster (even after my younger and hotter cousin did it first and better) and make my way to a grown up costume party, cleavage or not.  I had some issues finding big, bada$$ guns and had to settle for a mixed consortium of blue and neon nerf guns and a storm trooper blaster which I stole from my nephews. It wasn't right, but I thought it would get the message across. I was also hoping the freebie NREMT backpack that I stole from Aspen's Massive Pile of Junk would help to distract from the gun issues. Maybe the costume was terrible, or maybe it wasn't, I will never really know. I'd hate to read too much into the less-than-blown-away reaction of my 15 year old, but it might have been a decent indicator. If nothing else I gained a real appreciation for what those volleyball players go through at every game in the cellophane shorts they wear (who's the pervert that dreamed up the volleyball uniform anyway?). 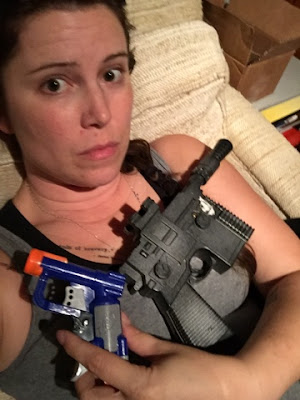 Even so,  my excitement was evidenced in the fact that I had my costume on by 3:00 in the afternoon, knowing full well that I wouldn't even be able to take my kids trick-r-treating until nearly 7, after which I would end up showing up late to the party I was headed to. But I was excited to be Lara Croft. Or the nearly 40 year old version of Lara, after a few too many Krispy Kremes. I sat on my couch and counted the minutes until my kids got home from their basketball games, talking myself alternately into the bravery of wearing my less-than-fully-clothed costume out on the streets with the kids or wisely putting my street clothes back on for my parental duties. My passion for cos-play won out and I courageously, at long last, stomped my mayonaise-white legs out the door along with a flamenco dancer, Minnie Mouse,  a bumblebee, a cat lady, Ke$ha, and some version of a SWAT police officer in camo pants and hockey sweatshirt. That one was a little confusing for me, but hey, who am I to judge when most of the people I passed on the street confused me with either a geriatric Katniss Everdeen or Ma Kettle missing her skirt (turns out a thigh holster can look like a utilitarian garter belt in the drizzly dark). 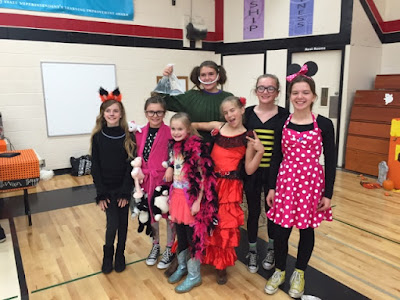 As fate would have it, after a much longer than anticipated round of freezing rain trick-r-treat, and just about as I was headed off to most likely win whatever costume prizes were out there, I got called off for a medical emergency with a friend. So I never made it to the party, which means I can rock my costume next year, since the four middle schoolers who saw it this year really don't count, right?

I think as far as my self-esteem goes, having the balls to wear spandex shorts even for a couple hours around a lot of judgmental teenagers was probably good for me. The biggest part of a healthy self-image is the ability to laugh at yourself, to not take yourself SO SERIOUSLY that you can't appreciate the humor in the muffin top hanging over your gun belt. The whole point of dressing up is the idea of living out a fantasy for a little while, stepping outside of the safe and normal and treading gingerly into the scary and unrealistic. I didn't feel like Angelina Jolie out there, but I DID feel like Lara Croft, and that's pretty ok with me. 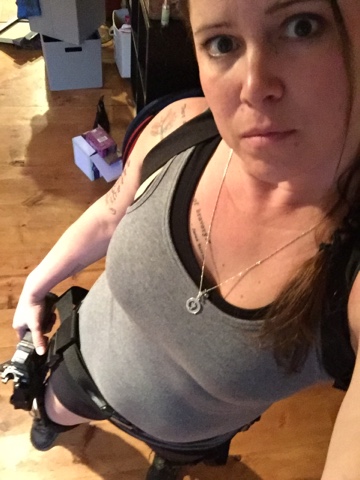