Today is day 2. Two days of Snowboarding for me this weekend, if dragging your snowboard down perpendicular to the mountain repeatedly is actually considered snowboarding. But I am here, and I am doing it. Finally. 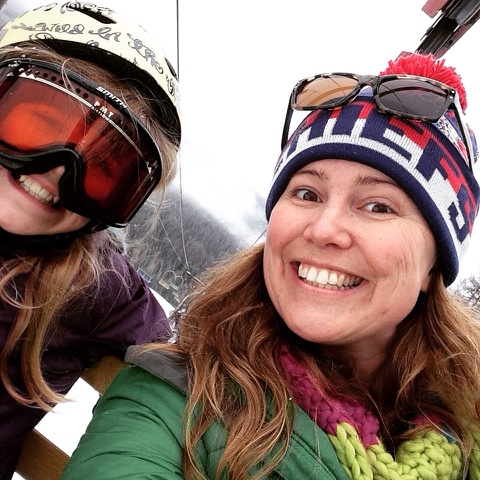 Yesterday was day 1, and it took me no less than 45 minutes to work up the courage to get onto the ski lift alone, by myself. It would have taken me longer, but after standing near the line for 45 minutes, pretending to be getting ready to get in the line, but telling everyone who asked that I was "waiting for someone" (the second coming of Christ, perhaps?) some random girl accidentally pretended to get in line in front of me, and then realized it was her turn to get on, panicked, backed out to "wait for someone" and forced me to load up. I couldn't back out because a really tall, broad shouldered, good looking guy with a tiny, adorable child on a snowboard was already waiting to load behind me. I felt like Buddy The Elf of the escalator. I am sure that I drug my toes up the ramp in a last ditch effort to fall off early and thereby escape the inevitable embarrassment of a crash at the top, or death from the highest peak of the lift itself, which is a common occurrence among mothers, as a brief search of online news will tell you. Unfortunately, I remained on the chair, and after a panic-stricken plea to the lift-op to slow the thing down at the top, or even just stop it ENTIRELY, I launched off. And I didn't even crash. Not until the third run, when I crashed every three feet, just to make sure that I still could. Of course, halfway through scraping my way down the hill, the good looking guy stopped to ask if it was my child flopping down the hill on her belly. It was, in fact, Aspen, in too-big boots, too-small snow pants and a skateboarding helmet that sloshes around on her noggin like a popcorn bowl. Hey, at least we are here. We are doing it. I contemplated denying ownership, but decided he was asking in a not-condescending way, unlike the dude at the top of the run who informed me very knowledgably that her boots were too loose, which was excellent information considering I wasn't absolutely certain that they were even on the correct feet. And all those weird laces with buttons and pulleys and crap. The heck. I was exhausted before I even took a 45 minute break "in line" for the chair lift. But back to the good looking guy - I said yes. Yes. She was mine. But all I said was yes. Being talked to by a good looking guy and every witty thing to say escaped me entirely. He said it was cute, and again I said yes. And then he swooshed off, I am sure thinking I was the rudest girl he's ever hit on on the ski hill. And immediately I thought of all of the best things to say. Funny, endearing things. Things that would probably make him ask to buy me a beer in the lodge later and we could tell funny parenting stories. And then he could teach me how to do something other than stand on my board sideways on the ski hill. And probably we would get married. But yes. That's all I had.

I survived several "runs" yesterday. Or maybe we should call them drags, because it's really more like my poor board was dragging me down the hill. And then again today, lest anyone say I am too old, too weak, too out of shape to come up here two days in a row and "snowboard". Because even those all of those things are true, I still need a good excuse to sit in the lounge and watch the Broncos play this afternoon. While my children master the craft of not-dragging down the hill. Also I have to let my legs rest because they are currently in the exact state of vanilla pudding from all of that being dragged and somehow I have to drive home. And I think I dislocated my back. Is that possible? 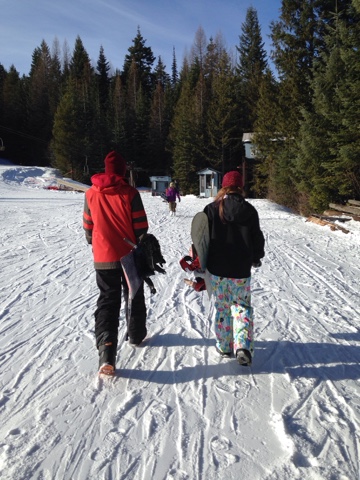 I started out this season with a colossal cloud of guilt hanging over my head for the season passes that we bought back in May. How would I, alone, and terrible at snowboarding, ever get three+ kids up to the hill and complete one day of snowboarding without dying, let alone an entire season pass worth. I did the math to figure out how many visits would appease the guilt. And then, realizing that either way, the money was spent a very long time ago, I needed to look at it instead as free snowboarding whenever we want to. And now it's fun. And since gas is $1.99 a gallon, and Aspen is pretty sure that Cup'o'Noodles is the best thing ever, it's almost like a free recreational family day. With football.  I have $6 cash that will just cover a beer, one beer that I will nurse for the duration of the game, or until they kick me out of the bar for being a Broncos fan, or the kids come complaining about cold fingers and no more cup'o'noodles. 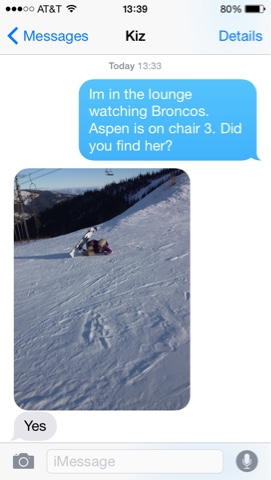 at 11 January No comments: