Things About The Toilet

Yesterday the Celebrity Toilet decided to start spewing water all over the floor every time some one flushed. The beauty of this latest incident is that instead of poop-contaminated water, it was dripping "clean" water straight from the tank. I say "clean" because one look inside the tank leaves reason to doubt the validity of that claim. How can a tank that circulates fresh water look like a cesspool that four zombies drowned in? Anyway, upon closer inspection, which revealed that A)someone had recently thrown up in/on the toilet and B) we're clearly not doing a good enough job when we have bathroom cleaning duty, it appeared that the water was coming from somewhere in the dark recesses between the tank and bowl.

Being the strong, knowledgeable, independent and self sufficient woman that I am, I immediately texted three experienced plumbers that I am also privileged call friends and relations. Within a short time I had learned that most likely the gasket that goes in between the tank and the bowl was shot, but it was an "easy" DIY fix, and I even got a swell brother-in-law to grab me a new part at the hardware store since he happened to be in town. It was Saturday evening, and since the options of a leaking toilet all weekend or even worse, going without a toilet until I could get the parts were both less than appealing, it seemed like a relief to pin down a solution. As if.

Sunday afternoon is the perfect time to set aside for toilet repairs. I mean if stuff goes really bad, you only have to wait until Monday morning for a hardware store less than an hour away to open up.  Plus it's easier to farm kids off to their dads house or wherever they can use a bathroom, because inevitably and invariably, as soon as you get the toilet into various and assorted pieces all over the bathroom, everybody needs to use it. I know this because it happened to me, who was the only one home post-toilet deconstruction. Lucky for me it's baseball season and the school set up an über-convenient Blue Room right across the driveway by the dug-out. I have a lot of experience with Blue Rooms so I wasn't afraid.

So, all brave and fearless and pretty sure I could handle it ("THAT'S THE SPIRIT!" said the swell brother-in-law), I set out to take apart the vintage almond Kohler with a seashell seat. They don't make them like this anymore, and I was fairly concerned about being able to match pieces if the taupe porcelain were to break. I had watched four different YouTube videos that alternately gave me hope and panic attacks, including one guy with a great Brooklyn accent and another one who kept doing it wrong and starting over. YouTube is great for figuring out all of the things you should probably never try to do yourself.

I got half way into trying to remove the first corroded and rusted-on nut and was in tears. It was about 20 minutes of struggling to understand how Guys That Do This Crap make it look so easy, why toilets are crammed in tiny corners,  and whose idea it was to put the bolts underneath where you have to hang your head down and try to reach up with a bulky wrench thingy and get them loose. In addition to earning undying respect for professional plumbers, I learned that it's very important to have the right tools for a job like this. Turns out that none of these were them: 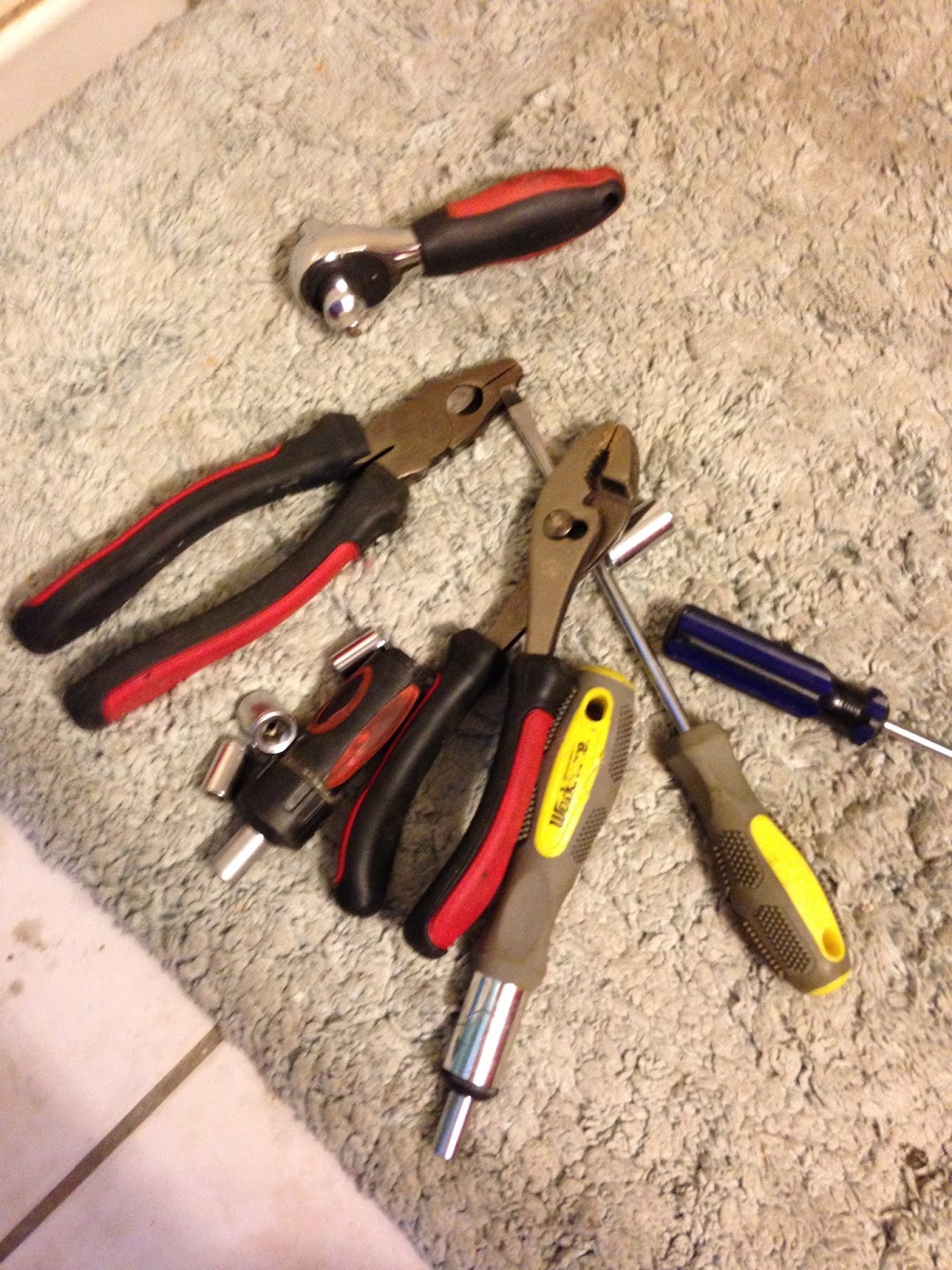 After an hour and a half of deciding I couldn't do it after all, crying, cussing a lot and trying again, I managed to get all three bolts off and remove the tank. It was one of my most triumphant personal moments to date, and I did actually yell "I am woman, hear me roar!" quite loudly upon completion. Unfortunately that was only the first step of the process, and depending on which experienced plumber you ask, also the easiest. Looking at the monster that I had just unleashed, I realized that I probably was dealing with more than just a gasket problem, since the plastic thingy in the middle of the gasket, but totally unrelated to it, was disintegrating to the touch. After a few texts to The People That Know, and a very in-depth but confusing conversation about ball-cocks, shaft-nuts and screwing flappers, I was given strict instructions to step away from the tank before things got any worse. Nothing in the world makes me as grateful to live here as the people that I know and love and that I can count on to jump in to the rescue, even when it means spending a super unfair amount of time in close personal contact with a semi-famous toilet. I am a lucky girl, and I only hope someday I can give something back to make up for all of the getting that I have got.

Finally got the right tool for the job. And once again, a working toilet.

at 19 April No comments: