Things Unseen - Why to Believe, and Why to Push It

It isn't just that I've had a couple of gin & sodas. It isn't just that it's The Holidays. It isn't that my good friend who really couldn't afford it footed my bill at the bar, or that by some weird God-related coincidence some random weird guy at the bar knew that this entire day swirled around and came back to It's a Wonderful Life and referenced it to me. It isn't because I am a spoiled brat and throw a lot of fits. Even if all of those things are true, that's not what it is.

What it really is, is that It Matters. No matter how much I feel like in any given moment, that it doesn't matter what I do, what I say, who I see or talk to, it really does matter. Just like if George Bailey had never been there for Mr. Gower, you never know when just being there matters the most. And you never can tell how the one time you made cookies with somebody, or read them a book, or made them watch a ridiculous Christmas movie, could be something So Big in their lives that they never fully recover.

Tonight I was feeling sorry for myself after sending my kids off to their dad's house for a Christmas celebration, and then I got into an argument with kids that aren't mine about Santa Claus and Christmas and believing. Even my own kids chastised me this holiday season about being too relentless with the Christmas Movies and the Christmas Music and TRADITION. Other kids think I am just plain nuts in my Santa Claus dogma.

I don't know how to say all of the feelings in my heart. All of the frustration for the 8 year old who tells me Santa Claus is a lie, because his parents believe in the importance of  teaching him to thank them for the presents they paid for. Or because perhaps they are afraid that as he grows older he will think that his parents lied to him about a mythical being. Or the 17 year old who doesn't even the know the name of Santa's reindeer because no one ever bothered to tell him. I probably sound petty when I say that it seems horrific to meet someone who has never seen White Christmas or Holiday Inn, or who has never laid awake all night listening for reindeer hooves on the roof of their house.

What baffles me is how you can expect your child to believe in a God that you cannot see or hear but banish so completely the wonder and faith of believing in Santa Claus. If there is anything of value that we can give our kids, it has to be the richness of believing in what we cannot touch or see. It has to be the mystery of Christmas Eve and the wonder of Christmas morning. 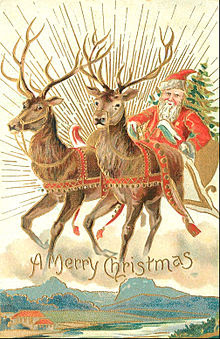 Years ago, as I slogged through the mess of my own spirituality in the wreckage of my soul as I was living in a hell on earth, I wrote a poem for my mother. It was shortly after my Grandma had passed away, the Grandma who had told me stories of brownie kiss freckles, mermaids at Twin Rocks on the Oregon Coast, and stories of fairies dancing in the ferns around Multnomah Falls. She told me the legend of The Bridge of The Gods, the ancient Klickitat brothers who fought over a fair maiden and wreaked havoc on the villages and lands of their people, ultimately destroying the naturally formed bridge over the Columbia River. In Punishment, their father, the Great Chief, struck all three down and they became the mountains: Adams, Hood and St. Helens, standing as mournful sentinels of caution to the native people. My grandma, with all of these stories, taught me faith in ages that have gone by before me, belief in knowledge that can not possibly be proven, and she is the reason I will always love, and always believe in Santa Claus, and even more, God. Don't tell me that there is an unseen world but that you are the only one with accurate information about it, according to your badly translated book of stories.

Christianity is in such an all-fired hurry to shun traditions and legends that originate before the advent of Jesus, because of their "pagan" roots - which interestingly, are ALL of our roots. There is history before Christ, y'all. Deal with it. There were miracles and mystics, and if God is yesterday, today and always, then most likely he was hanging out with the pagans before Jesus wandered along. Our little box of religion that is a few thousand years old puts a lot of limits on an omnipotent God, who, incidentally created all of the cultures behind all of the legends and stories and mysteries.

Here is the poem I wrote, and the belief that I feel compelled to share with my children and any others that I come into contact with. Because this is faith. Because it probably matters. Because I think my grandma had it figured out.

I believe in sprites and nymphs
Mermaids and mischievous imps
Little things we never see
That hide in toadstools, rocks and trees

I believe there is a world
Of unseen things as we’ve been told
With lots of different creatures there
Irksome ones, and some that care