In some ways the new dog is more like a horse, if we're going by sheer size, volume of food consumption and general maneuverability around the house. At this point he outweighs everyone else that lives here. In fact, he makes Truck look like ein kleine hund. The new dog is a purebred Bloodhound, the kind I have wanted pretty much my whole life. The kind with big droopy lips and eyes who howls at the garbage truck and bays like he's on the trail of an escaped criminal when someone doesn't give him a snack at the dinner table. 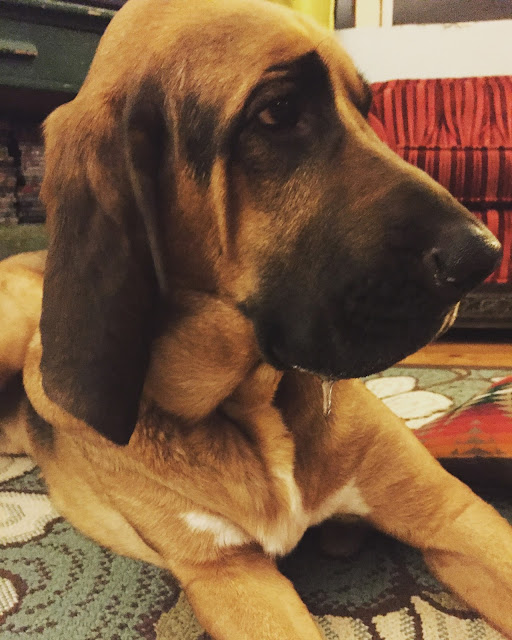 Frank adequately compensates for all of the teenagers that have moved out of my house in his moody flailing about. He is the master of dramatic sigh-filled flops onto the couch, following by a series of long high pitched moans that are eerily reminiscent of MacKenzie doing math homework. He helped himself to a plate of waffles on the back burner of the stove one day, thereby filling the rather large appetite gap left behind when Halle moved out. And his knack for watching you silently with knowing eyes from across the room has replaced the hole that When left when she decided she'd had enough of Northport and moved away. Most of all he is chief accomplice of the legendary Noone, helping to spill, break, tear and cover in mud and/or slobber every single item in the house and then disavow all knowledge. Natalee says that his drool dries all sparkly like unicorn blood and she seems to enjoy the sheen of glitter cast liberally around the house.

He's a big baby, really. A two year old softy who doesn't understand that his 6 inch dinner-plate paws come down with the force of a baby elephant everywhere he goes. He tries to play with Dagny, who just gets mostly offended and insulted that he can't seem to control the perpetual flopping. But he is a nice boy. He's gentle and listens MOST of the time, when he feels like it. He and Truck are NOT best friends, because the thing about hounds is that food is their favorite, and sharing is not.

Frank's real best friend is Ava, the neighbor's pretty German Shepherd, who shares his affinity for smelly river water and running away whenever possible. Luckily Frank has taken to running away to Ava's house when an unwitting child leaves the gate open, and the Middlesworths bring the reprobate hound back sadly sans-girlfriend. I am not unconvinced that Truck hasn't been unlatching the gate just to tempt the giant puppy away from his house, but I have no visual evidence of this sabotage.

When we got him, they called him Hank, but since we already have a Hank dog in the family, we morphed his name to Frank, which has become interesting when we get him and Truck confused and start calling out weird amalgams of both names. My sister insists that it's not her fault if she accidentally calls Frank something more obscene. Luckily he also responds to "poophead" and "dufus" so we have a  lot of fall back options.

Since Frank joined the ranks of The Doghouse, I will admit that my vacuuming skills have improved exponentially. I will never understand how short-haired hounds lose so much hair during the winter, like a punishment for not banishing them to the frigid out-of-doors. Another perk to having a horse sized dog in the house is that the cat is less than impressed, so Crookshanks has more or less taken up residence out side, which is fine with me.

We love Frank. Less when he is yelling at Truck for hurting his feelings by walking through the kitchen, and more when his lips fan out like mink blankets across the couch. At this moment he is hiding outside in the rain where he RAN when I tried to put some tea tree oil drops on his neck to discourage his flea comrades. I think witnessing Dagny being washed in the kitchen sink aided his fear response, and he probably thought he was the next creature to be crammed into the metal square that is smaller than his head. Poor Frank. Life is scary. Don't tell him he has a vet appointment for a rabies shot on Saturday, he would probably cry about it all night. 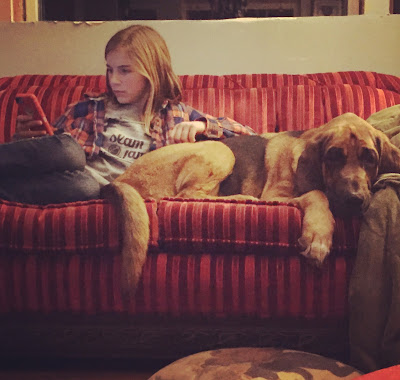