People who are unrealistic about their age and ability level should probably not go snowboarding. Probably, people like that shouldn't even be let out of the house because there is a lot of liability involved. I mean, it doesn't help when people like that go out for drinks the night before and their "best friends" tell them that one more Salted Nut Roll won't hurt. (Ok, Maybe it was actually me saying that, but still.) Bad ideas, all the way around.

The craziest thing about snowboarding with absolutely no skill level whatsoever, is that even if you never exceed speeds of 3 MPH, when you crash it still feels like dying. It's not like I have worked up any velocity! I mean, the mass is far greater than the speed, and even so, I think that I snapped my neck and broke both wrists at least three times apiece. I even knocked the wind out of myself in a slow motion yard sale in deep slush. Today I can't move my head. My neck can't even hold my skull upright. I have been in a weird semi-reclined leaning position all day, basically with the muscles in my neck that are tightly spasmed holding my head at an awkward angle slightly off of the pillow.

I started to get excited halfway through the day up at Red Mountain yesterday when I finally got around to using my toe edge and figuring out how to drive my board with my back foot, which kept changing because I am not sure if I prefer left or right forward. I watched my sister with a broken ankle swooshing down the hill as though it was the easiest thing ever, and I felt envy in my heart, possibly with some malice. She's not THAT much younger than me. Where did she get a skill level? It's hurtful.

I did get my crashing skills finely honed, with a little help from Aspen, who has mastered the art of the faceplant. I even held a perfect record of not ONCE disembarking the chair lift without tripping the three young kids that I was "chaperoning". I'm sorry you guys, I thought I had a skill level. This is probably due to the wild success I experienced last year on the ski hill.

Luckily I had exactly nothing that I HAD to do today, other than lean weirdly on my couch and complain a lot to anyone who would listen, and perform some deep self-evaluation about unrealistic expectations and Peter Pan complexes. I was planning on taking Frank the Bloodhound for a brisk three mile walk, but that idea went right out the first time I tried to stand up.

Anyway, I will just be here on my couch for the next 8-10 days until the muscles in my neck rescind their mutiny. Send wine, or Salted Nut Rolls. 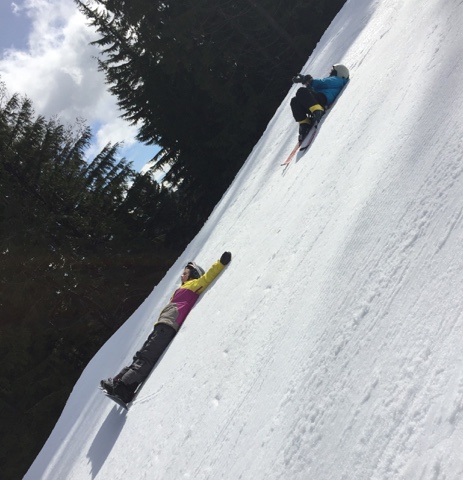