I've been a single mom for some time longer than I have had a man around to fix stuff. I've learned a lot over the years about the things I can, and CANNOT do for myself, but it seems like it's a perpetually evolving process that needs updating constantly.

There are some real benefits to being a single woman and Doing It All Yourself.

For instance, during a recent invasion of slugs, and then when a hoard of Giant Hobo Spiders moved into my bathtub, I had the opportunity to up my bravery game and take on the pestilence, head on, sans male protector. I salted the heck out of 6 inch slime monsters and watched them melt like the wicked witch of the west, feeling powerful and courageous. And on TWO different occasions, I battled four massive hobo spiders in my bathtub, with only scorching hot water on my side. The horrific arachnids were so big they wouldn't even fit down the drain, so I had to muster my bravery and scoop them out of the tub and transport them to the porcelain aqua-mausoleum. TWICE.


And then there is the Rosie the Riveter "We Can Do It" attitude that has me all cavalier and heading off down the road with my Thule carrier fastened to the top of my car BY MYSELF. Except it was fastened entirely upside down and backwards. Miraculously, the thing didn't blow off before I realized that it was on completely wrong, pulled over and reattached it almost completely wrong again. I feel somewhat brilliant that the right way of attaching the thing slowly came to me as I made a 500 mile drive, one step at a time. It's like rocket science, but easier. The 16 year old son-that-isn't-mine shakes his head in disgust at me.

The learning opportunities, folks. They're phenomenal. If I had some doofy guy around doing everything for me, correctly, the first time, think of all of the things I wouldn't learn. 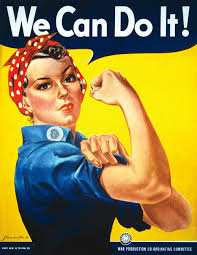 My next undertaking is learning how to shoot. Guns. Real ones. All of them. And I feel kind of awkward about borrowing other people's husbands for lessons, so I am just gonna go out and teach myself. If this isn't the best idea I've ever had, I am not sure what is. I just have to figure out how to load the guns that I have to shoot. It can't be that hard. I will just YouTube dome do-it-yourself videos: How to load and shoot an SKS... What's the worst thing that could happen?

I mean it worked with plumbing. At least until I had to borrow someone's husband to finish the job I was botching royally. The text conversation went something like this:

me: *photo of toilet in pieces
Friend With Useful Husband: oh that doesn't look good
me: I think that one doohickey is the broken part, so Ima just switch it out. But I can't figure out where the whoozit in the left corner goes.
FWAUH: Hold on.
me: *girl from Ipanema instrumental
FWAUH: He says stop. Don't touch anything else. He'll be over after work.
me: I am pretty sure I can do it
Useful Husband direct text: STOP NOW
me: ok

Or there was that time that the hot water heater died. Like 8 times in a row. And I tried to fix it myself.

me to friend's useful husband (notice how the middle woman has excused herself): so if nothing is coming out of the hose and it's making a weird screaming sound, is that normal? Do water heaters ever blow up?
Useful Husband: BRT. Stop touching things.

Of course this is the same Useful Husband that I asked to check the trailer that I hooked up and was hauling home by myself. Guess the thing wasn't even latched on or something. Who knew?

Someday I should write a book called Useful Husbands and The Friends I Lost By Borrowing Them.

When I lived in Bend and all of my Friends With Useful Husbands were hundreds of miles away, I tried to rewire my dryer and in addition to nearly burning my rental down, I doubt I would have survived the 220 volts I tried to play conductor for. I placed an ad on Craigslist that went like this:

I NEED A HUSBAND

I tried to switch the cord on my dryer from a 4 prong to a 3 prong and I nearly lost my life and burned down the house. I am cramming food for 5 people in my tiny freezer because I don't have the means to tear out a bench to make room for my chest freezer. My six year old is dehydrating herself on a strike against drinking water because we haven't hooked the ice maker/water dispenser on the refrigerator up since we moved in and she insists that the only good water to drink comes from the refrigerator. I need a man, or a woman, who can re-wire my dryer without orphaning my children, make two ridiculously small cuts with a skill saw to take out a bench, and run the water line for my refrigerator. I will pay, or I will trade you for cookies and/or beer, and let you pet my dog, who feels severely outnumbered in a house full of females. If you need a really ginormous and comfy love seat, you could have that too, but either way I am terrified to make another attempt at being an electrician, and I just don't have the tools and/or time to do the other stuff. The last love of my life took all of my tools when he left, bless his heart. Please let me know if you can do these things for me at some ridiculously inappropriate time, since I work 7/ 10 hour days a week. I have the dryer disassembled, the new cord ready to go, and I have no idea what I need for the ice maker. Maybe you do. If you are lucky my 10 year old will give you her impression of a jump-roping pig while you are here. Someone licensed and bonded would give me peace of mind, but I am open to someone with experience.

Please email me and let me know how much you would charge, and if I should make you dinner.

Out of that ad, I ended up getting a guy who ran a company called Aspen Building somethingoranother, and by his correspondence seemed less expensive than the only other email I got, from some licensed and bonded dude who, several months later, would end up being my next ex husband (that's a whole different tale to tell). Aspen Building dude charged me plenty for doing about 25% of the work, and proceeded to ask me out. Maybe I really missed something there. Or maybe I should have just tried it again on my own.

All in all, the fact that both I and my children have survived my solo flight as a "functional" adult so far is nothing short of impressive. I continue to learn, sometimes at great expense, and burn out friendships. Because the only thing worse than being a third wheel is being a squeaky one that needs to borrow your grease all the time.

In all seriousness, I am eternally grateful to the Useful Husbands and the wives who have loaned them with no grudge, as well as the brother-in-laws, dads, uncles, neighbors and friends who have saved me from my own independent capabilities more than once. I CAN do it, but it's much easier with someone who knows how.