It all started so innocently. I came home late one night from work and saw it - a dark and ominous presence lurking underneath the kitchen sink as comfortably as you care, clearly making himself at home. It was a slug. Not a huge one, a smallish, dark green, garden variety slug. I am not afraid of slugs. They remind me of growing up in Portland and the dank undergrowth of rotting bark and fern leaves. In some twisted way, I almost think they’re cute. Like a beauty-challenged shell-free version of a snail, and who doesn’t love snails?

Thinking I was brave and tolerant, I grabbed the slug and tried to disengage it from my kitchen floor. I was rewarded with slime covered fingers. I don’t know if you’ve ever had slug slime on your fingers, but I learned very quickly that it doesn’t wash off. Not with soap. Or vinegar. Or scalding hot water… Nope. Only time and violent abrasion remove slug slime. Lesson learned. Revising my extrication strategy I grabbed the little bugger with a paper towel and pulled him off the floor. It was an experience similar to stretching melted caramel off of a surface, and reluctantly, at last, the slug let go his gastro-clutch on the laminate and was relocated compassionately to the out-of-doors.

In the wake of record hot and dry summers, this one so far is going down in the books as one of the wettest in recent history. It’s the only thing I can fall back on as an explanation for the sudden emergence of slugs at my house. I have lived for 20 years in the area and never seen a slug. A few nights after the first sighting, I let my dachshund out into the yard and watched her sniff another specimen on the porch with curious disdain. I was happy that she wasn’t more interested as I flashed back to my parents wiener dog who liked to eat them, and could never get the slimy goo completely off of his teeth. Ever. The whole process involved far more chewing than I would imagine is healthy, and resulted in terrible breath for an extended period of time. In Edgar the Dachshund’s defense, I learned recently in my investigatory research that slugs are actually part of the human diet in some cultures. Although they can also result in violent gastro-intestinal illness and even death. I hope they’re tasty with that kind of risk involved. *shudder

Some important things you should know about slugs: They are referred to as Gastropods,drawing from the root words Gastro = stomach and pod = foot. Which basically means they walk with their stomachs. Based on everything I read I feel like it’s safe to assume that MOST of a slug is the stomach, followed by a collection of even weirder anatomical parts and pieces. Slugs are also hermaphrodites, which means they all possess both genders and have successfully surpassed humans in the evolutionary race as we are still trying to decide amongst ourselves which gender we should be. Interestingly, slugs are REALLY good at two things: eating and breeding - I guess something else that they share in common with basic humanity.

In fact they are so good at breeding that in the event they can’t catch the whiff of a romantic slime trail, they can reproduce with themselves. How’s that for self-sufficiency? Catch up, humans. There are the drawbacks among certain species of slugs that involve mating processes that require the chewing off of genitalia and oh yes, cannibalism, but when you’re as highly evolved as a slug, who’s gonna complain about little things like that? They are also not choosy about their mates (as self-reproduction would indicate), and have been known to cross breed with other varieties of slugs, creating hybrid super-slugs of greater size and tenacity.

After the midnight kitchen invader and the porch sitting slug encounter, I figured it was a fluke thing, until last night, when my best friend went to visit my bloodhound, who had gone on a neighborhood walkabout while I was out of town. My best friend likes to visit my dog. Mostly because she enjoys the thrill of driving around town to find him, chase him and tie him up to his leash in the backyard where he should have been in the first place. It’s pretty much her favorite pastime. Especially at 11:00 at night. On the particular evening in question, as she hunted through the sketchy overgrown grass (remember I am out of town) of my backyard for a camouflage dog lead, she accidentally flashed her phone light up on the outside corner of my house. Four giant slugs were making their merry, slimy way up the wall and probably toward my bedroom window, because that’s where most small creatures go to die (a story for another day). 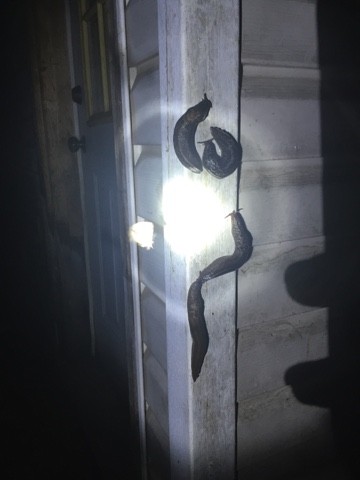 In my reading, I discovered that in addition to being prolific reproducers, because they are totally boneless (like chicken tenders?) they can squeeze through the smallest of openings. I have several smallest of openings around my bedroom window, I am quite sure, where even the largest and most tenacious super-slugs could squish through. All the grossness.

While my best friend enjoys tracking down my reprobate bloodhound in the middle of the night, she was not keen on picking ½ pound slugs off of my house, so by the time I get home my bed will probably be the local nest of feasting and revelry for six generations of giant slugs.

The main point of my slug research was to determine the best way to exterminate the wet-weather invaders, but mostly what I discovered was that they are impervious to many of the recommended remedies. Natural repellents supposedly include coffee grounds, egg shells and human hair (that one would be easy to supply out of my house), but most of the comments led me to believe they were less than effective. Of course, many of the online sources were gardeners concerned for their crops and not panicked defenders of bedrooms. When I was a kid I learned that salt kills slugs, and might have performed a scientific experiment or two on resident slimers. Most gardening experts don't recommend salting garden spaces as the salination of the soil can affect crops, but I am not against salting my bedroom. I seriously doubt it would be as salty as I will be if I come home to a slug-fest in the house.

So, as an alternative to burning the house down and starting over, I will probably be salting slugs when I get home if anybody wants to come witness the scientific effect of osmosis when slug meets sodium chloride. You’re welcome to stop by and help me scrape the gooey remains of fatally dehydrated slime balls off my floor. Or I can just send pictures if that’s better.